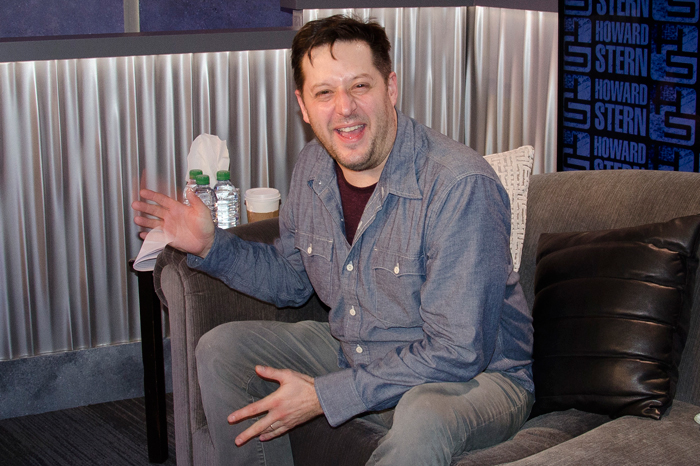 He plays the President of the United States on his own successful late-night TV series, but according to Anthony Atamanuik that still doesn’t get him recognized out in public — and that’s perfectly fine by him. On Wednesday’s Stern Show, the “President Show” star told Howard that when he takes off his Trump costume, not even his Comedy Central crew can identify him.

After recently shooting a field piece for the show, Anthony recalled how he changed out of his clothes and removed all of his makeup and then returned to the set. He then accidentally bumped into one of the crew members who angrily told him, “Hey, watch it!”

To become President Trump takes two hours in the makeup chair for Anthony. First, his hair gets covered by a bald cap which is then sealed to his head and covered with his signature blond wig. Next, his face has to be shaded to match Trump’s using some detail-intensive air brushing. To top it all off, Anthony wears a body suit to add some heft. Howard wondered if he gets hot wearing that but Anthony explained the suit has its own cooling system.

“It looks like I have like a little shit pipe. Like a colostomy bag,” Anthony said, explaining how a tube that runs into his body suit connects to a vent with ice water running through it.

Even though this is the biggest role in Anthony’s career, he still doesn’t consider himself an impressionist, per se. “I’m not an impressionist, technically … I just did Trump as a lark. So, I see it like an acting job more than an impression,” he told Howard. Still, Anthony is hoping to play POTUS for however long Trump stays in the White House and is crossing his fingers Comedy Central keeps ordering more episodes.

On Thursday, “The President Show” will air at a special time for “I Came Up With Christmas,” a holiday special hosted by Anthony and featuring a few of the prez’s friends. James Adomian will be back as Bernie Sanders after also appearing on the Stern Show as the onetime Democratic candidate. Comedian Mario Cantone will also drop by as Anthony Scaramucci as will “Broad City” star John Gemberling as Steve Bannon. Anthony also teased a presidential duet between him and Emmy winner Bebe Neuwirth.

Before he left, Howard asked Anthony if he could speak to President Trump. Check out the audio (below) of their conversation about the ongoing rift between the Commander in Chief and North Korean dictator Kim Jong-un.

See Anthony Atamanuik on “I Came Up with Christmas: A President Show Christmas,” airing Nov. 30 at 10 p.m. ET on Comedy Central.