Comedian and “Curb Your Enthusiasm” star also tells Howard to double up on his jeans if he ever returns to Roosevelt, N.Y. 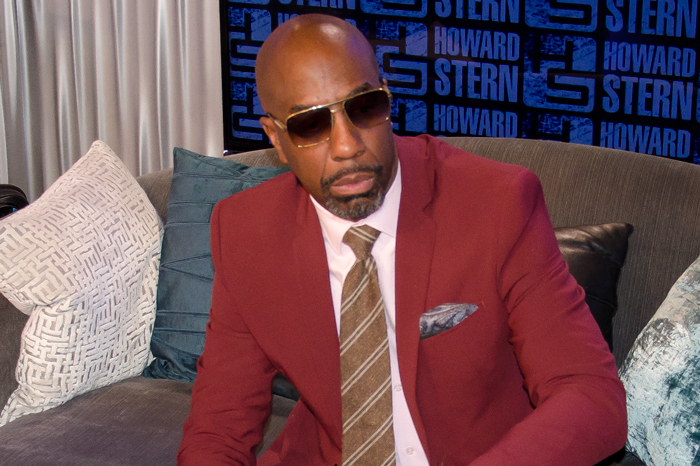 There were several life lessons to be learned on Wednesday’s Stern Show when comedian JB Smoove stopped by to tell Howard about his new page-turner “The Book of Leon: Philosophy of a Fool,” available now. Written in the voice of his always-candid “Curb Your Enthusiasm” character Leon Black, JB’s book offers unique takes on a wide-range of subjects. For instance, any guy not washing their hands before they pee is putting their health at risk, according to Smoove’s Leon.

“Your dick is the portal of fucking diseases,” Smoove told Howard. So, if you relieve yourself before rinsing off, JB explained you’re essentially spreading all of the grossness you’ve touched throughout the day onto your manhood. “Your johnson has attracted the fucking flu virus through your fucking filthy hands,” Smoove said.

JB’s bathroom routine starts at the sink. “Every time I walk into the bathroom, I wash my hands first, then I go to the urinal, use the bathroom, go back, and wash my hands again,” he told Howard. Since not everyone is as cleanly as JB, though, he won’t touch the door handle on his way out. Instead, he waits until someone else enters in order to exit the bathroom.

The new book also describes the benefits of dating a nurse or a nanny and how putting your box spring on top of your mattress will ensure that a woman won’t want to sleep over after hooking up. JB also writes out Leon’s thoughts on people giving their children unique names like River, Cabin, or, God forbid, Labia.

“People who don’t know what the fuck a labia is would say, ‘That sounds nice,’” JB joked.

JB was able to become Leon Black in his first “Curb” audition. He told Howard how he showed up for the tryout in character so that producers immediately got a sense of who Leon was.

“They didn’t know who Leon was until I walked in the room,” JB said.

He even told the show’s star Larry David that he might slap him in the middle of their improv session since that’s something Leon would do. Though the characterization might have frightened Larry a little, it landed JB the job and he’s been costarring on “Curb” ever since.

Aside from his TV gig, JB told Howard he still regularly performs stand-up. “That is my bread and butter,” he said. “I do a lot of shows.”

Smoove’s first time getting up on stage in front of a crowd actually occurred in college after his friends dared him to participate in a live dating game show. But rather than romance, it was the love of getting a laugh that JB got that night.

“I ripped that shit,” Smoove told Howard. “Every answer I gave rocked the house.”

He’s been grabbing the mic and telling jokes ever since, but JB explained he never likes to be too prepared before taking the stage. “I fucking refuse to go on stage with a fucking plan. I fucking never have a fucking plan,” he proclaimed.

Rather, JB arms himself with what he calls “bullets” — jokes or bits that might be a jumping off point for him during a show. But with years of practice under his belt, Smoove said he’s become comfortable enough to make up most of his act in the moment.

“I’m not nailed down to that shit,” he told Howard. “I improv the fuck out of my audience.”

Before finding success as a comedian, JB held down several different jobs, including as a door-to-door fire extinguisher salesman. He told Howard he was good at getting people to purchase his product but lost the gig after almost burning someone’s house down.

Remembering where he came from is important to JB, who returns to his hometown of Mount Vernon, N.Y., regularly to visit with the people from his past. He recommended Howard do the same and pay a visit to Roosevelt, N.Y.

“You gotta ground yourself in amongst the people who whooped your ass when you was growing up,” JB said.

But Howard, who found himself reliving an experience from his youth when some school bullies stole the jeans he was wearing, wasn’t sure returning to his hometown was such a good idea.

JB had a simple solution: wear two pairs of jeans.

“You’re a genius,” Howard said with a laugh.

JB’s fashion expertise didn’t stop with doubling up on denim, either. As is always the case whenever he comes by the Stern Show, Smoove was dressed to impress, wearing a chic burgundy sports coat, a casual pair of blue jeans, and some leather cowboy boots that even he had to joke about. “I’m not a goddamned cowboy. When’s the last time I’ve been on a fucking horse?” JB said of his footwear.

Whatever the style, JB told Howard he could make it work, no matter how ridiculous. “I could put a trench coat on and stuff the trench coat in my fucking pants,” he exclaimed. “If I make that shit look good … motherfuckers will copy that shit, I’m telling you. You’ll see everybody walking around with trench coats stuffed in their fucking pants.”

He said he remains a trendsetter, though, by frequently switching up his look. “I’ll do something and when other people start copying me I change it up again. I’m a chameleon,” he explained. “I keep people on their toes, that way they can’t copy my style all the time.”

His love of fashion has even led to his own upcoming clothing line called the Jerry Angelo collection — Jerry Angelo being his real name and, as JB puts it, just a “classy” name for a clothing company.

JB Smoove’s “The Book of Leon: Philosophy of a Fool” is available now.