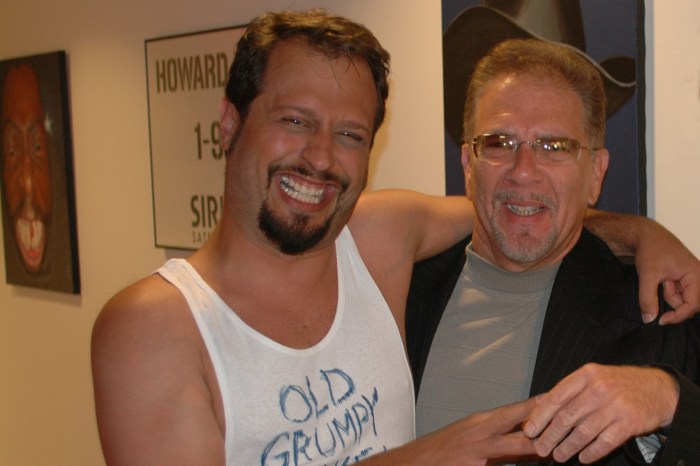 Two Stern Show staffers got singled out on Wednesday morning for being by far the creepiest guys in the office: Sal Governale and Ronnie Mund. But which one wins the title of “creepiest”? Howard put a poll up on Twitter to find out and the votes from superfans immediately poured in. But before the creep contest could get started, Howard had a question for Sal.

“Someone told me that you jerk off, like, you’re on your back and your legs are up in the air because you like to fantasize that you’re getting your ass eaten while you jerk off. Is that true?” Howard asked Sal.

“I don’t know about that,” Sal said with a laugh. He then came clean and told of a recent self-pleasuring session he had while staying at a hotel in the city in order to be close to work during this month’s big snowstorm. Without his wife there to catch him, Sal was free to do whatever he wanted.

“When I did it, I kicked back and I dangled my ankles in the air,” Sal confessed. The next day, he told Richard Christy he had “the best jerk off” of his life. As for why he enjoys the unique position, Sal explained: “The fact that your ass is open and the air is wafting into your butthole.”

However, Sal said he’s never truly experienced the real thing, although he came very close. “I had one girl … one time and it only lasted a second,” he explained.

Howard then reminded everyone how Sal once went into a “Lesbians Only” internet chat room wearing a wig and sunglasses in order to pass as a woman. “I got these lesbians to think I was a lesbian and I said my name was Josephine,” Governale said.

What’s more, Sal was sitting at his computer in the living room with his wife sleeping on the couch nearby. “And then my wife woke up,” he told Howard. Sal quickly removed the wig and disconnected the webcam. “She goes, ‘What are you doing?'” Sal continued. “I just said, ‘I was just having fun.'”

With all of the evidence presented on Wednesday’s show, it was left up to the fans to decide who the bigger creep was and in the end, it was Sal who racked up 60 percent of the votes on the Stern Show’s Twitter poll. Check out the results (below)!

Quick Poll: They’ve both pleasured themselves to family members but we want to know, which one of them is the “creepiest”?