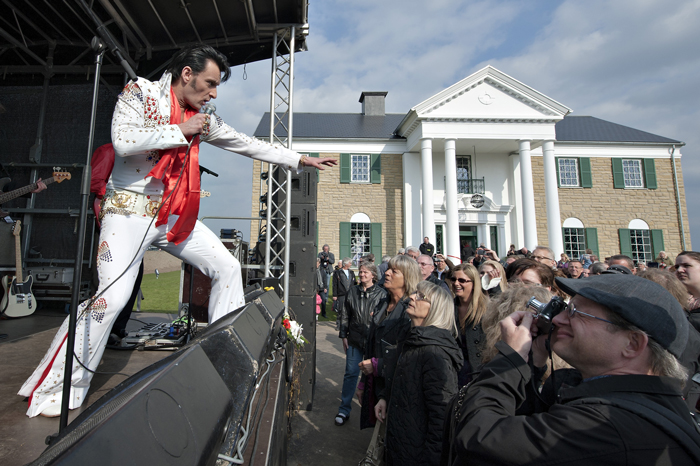 Though he passed away over 40 years ago, the love some fans have for Elvis Presley refuses to die. That’s what Stern Show correspondent Wolfie found out during a recent trip to Graceland, Elvis’s famed mansion in Memphis, Tenn.

He spoke with several in the crowd gathered for a special tribute to the King, including a few Elvis impersonators. One gentleman from Australia, dressed from head to toe in an Elvis costume, said no one can actually impersonate Presley since he was one of a kind. Another fan tried singing “Hound Dog” for Wolfie but struggled to remember the song’s lyrics despite swearing he loved Elvis.

A woman visiting Graceland from Great Britain told Wolfie how much Elvis meant to her through tears, explaining, “I just love the man. Always have.”

But one devotee went so far as to say, if given the choice, she’d see Elvis in concert rather than stop the 9/11 terrorist attacks.

Stern Show staffer Sal Governale considers himself an Elvis enthusiast and recently attended an Elvis tribute concert. However, rather than sit and enjoy the music, he insisted on talking throughout the entire show in order to share Elvis facts with those around him. He even had an explanation about “Battle Hymn of the Republic” and its significance to the Civil War.

Hear Sal’s history lesson in the audio clip (below).