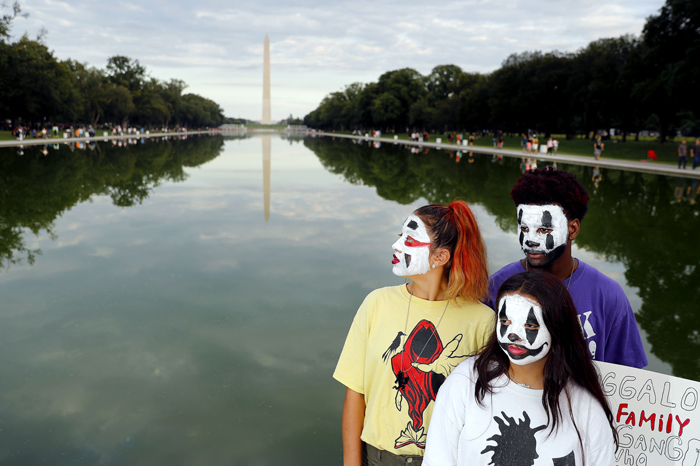 Hardcore fans of the Insane Clown Posse descended on Washington, D.C., in 2017 in order to fight an F.B.I. designation that classified them as a gang. Stern Show correspondent Wolfie was there to record all of the action, speaking to several “Juggalo” members about why they were marching on the nation’s capital.

“It was a pretty crazy day,” Wolfie told Howard and Robin, saying at least a thousand people showed up for the demonstration. The stars of ICP, Shaggy 2 Dope and Violent J, were also on hand to fire up the crowd.

“We still believe in the right to have an opinion,” Violent J told their loyal fan base. “Taking away someone’s opinion is no different than sewing their butthole shut.”

Sewing appendages shut wouldn’t even be the most shocking thing someone could see at an Insane Clown Posse concert, as Wolfie heard stories from fans who’ve witnessed everything from a guy cutting off his nipple and selling it for $40 to someone drinking porta-potty water, also for $40.

When Violent J and Shaggy 2 Dope visited the Stern Show in September, they told Howard about how several of their fans have had their lives ruined by the gang designation, sharing stories of Juggalos losing their jobs, losing custody of their kids, and even being rejected from joining the military all because they were followers of ICP.

“Juggalos are laughed at. They’re a punchline and that’s funny. I get it. We’re different,” Violent J told Howard during their recent interview. “But is it fucking funny to take millions of people and criminalize them for what they listen to?”

On Monday, Howard debuted a phony phone call the Insane Clown Posse put together during their last visit to the Stern Show. Hear what happens when Violent J and Shaggy 2 Dope call an internet radio show in the audio clip (below).