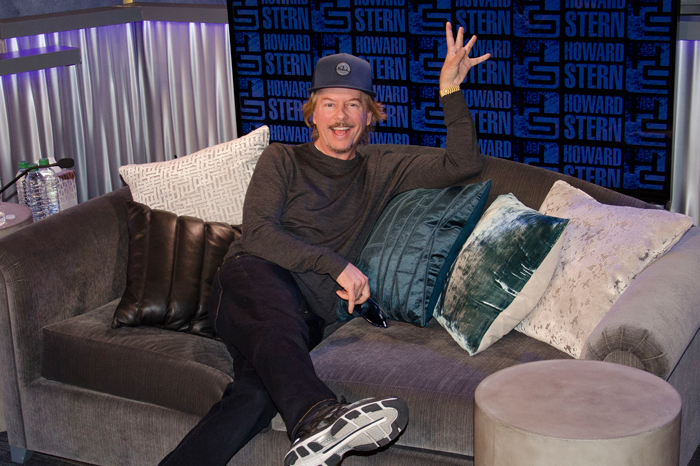 The post-Oscars Vanity Fair party is packed with countless stars every year, including comedian David Spade who was in attendance at the annual Hollywood event last weekend. Spade shared what went down inside the party during his sit-down interview with Howard on Wednesday morning.

“You sort of feel dumb after a while … there’s too many famous people there,” David said. “You’re always being career checked.”

Spade explained that even if you wind up talking to another celebrity, the conversation rarely lasts all that long since everyone is always looking around the room trying to spot some other famous face to talk to. With that in mind, David and his crew instead pick a spot and stay there throughout the evening.

“We post up in the corner, have our drinks, and just watch,” he told Howard. Then, whoever actually wants to talk to him can. “You’re gonna meet random people who actually like you.”

He also told Howard how he and his fellow celebrity Stern Show superfans tend to stick together at Hollywood parties. Just recently, David ran into Adam Levine and the two chatted about both being on Howard’s show. “Because if you hear someone on here, you usually like them better,” Spade said.

Even attending his longtime friend Ellen DeGeneres’s 60th birthday party presented a high-pressure situation for David. He told Howard how he was in the same weed-smoking circle that Jennifer Lawrence was talking about during her Stern Show visit in February. David admitted he was trying his hardest to play it cool next to the Oscar-winning actress while taking a hit, but he ended up failing miserably.

“She literally goes, ‘old man alert’ because I coughed for 45 minutes,” Spade said with a laugh. “It hit me so hard and half the real estate in my brain was gone immediately.”

With the high taking over, Spade turned to Jennifer and tried to excuse himself from the group. “I actually said to her … ‘I gotta go out back.’ And she goes, ‘You have to go out back? Or you’re just walking away to walk away?’” David recalled for Howard.

But while walking away from Jennifer, he spotted another A-lister coming right at him: Oprah Winfrey. As high as he was and even though he and Winfrey locked eyes, David knew better than to try and strike up a conversation with her.

Spade’s high profile once wound up costing him quite a bit of coin at Sean Penn’s annual charity gala to benefit Haiti. The event includes an auction and David decided he was going to bid on some front-row tickets to a Bruce Springsteen-Paul McCartney concert. 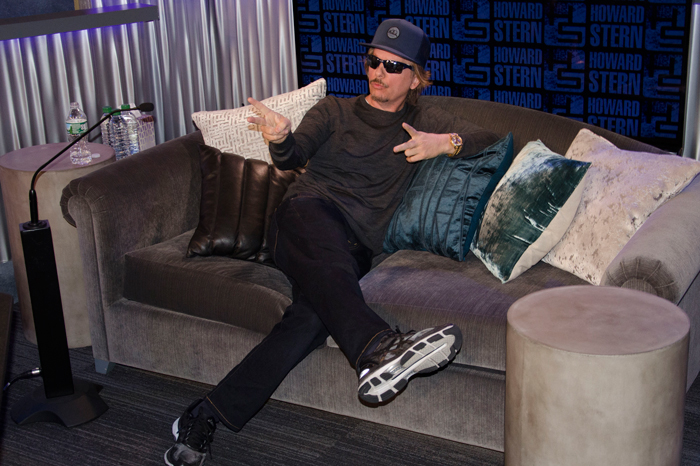 “They want you to bid … they sort of rich-shame you into bidding. Happens all the time,” Spade said. He bragged a bit about his plan to bid on the tickets to an attractive woman who was seated at the same table as Spade. But what David didn’t expect was for the opening bid to be $50,000.

“My paddle goes right down,” David told Howard. His paddle didn’t go down fast enough, though, and before long, Spade was being asked directly to bid on the tickets as the asking price continued to rise. With everyone else in the room watching him, Spade said he felt compelled to keep on upping his offer.

In the end, Spade dropped $125,000 for the concert tickets and said after securing a winning bid as big as that one, the event staff runs up to you with their credit card machine ready.

David may have won his auction item but he told Howard about witnessing Brad Pitt lose out at the last second for a chance to watch an episode of “Game of Thrones” with its star Emilia Clarke, who plays Daenerys Targaryen on the hit HBO series and was also there in-person at the charity event. Though it looked like Pitt was going to win with a generous bid well over $100K, a non-celebrity bidder offered $160,000 and won the prize.

Recognizing celebrity isn’t always easy, either, as Spade learned when he ran into Danielle Bregoli, better known as the “Cash Me Outside” girl. She was out in public with her mom and a bodyguard when one of David’s friends informed him of who she was. The two talked and took a selfie together which Spade later posted on his Instagram along with a caption that poked fun at her not being famous anymore. He soon learned her 15 minutes of fame were far from up after thousands of her fans started leaving negative comments for him, going so far as to say she was actually a bigger celebrity than Spade.

“She has 10 million followers and I have a million. I go, ‘Well, maybe she’s more famous if you go by facts!’” Spade told Howard.

Bregoli eventually took her own jab at David, later posting she’d assumed he was her waiter — a joke Spade admitted was pretty funny.

Mocking what goes down on social media is what Spade’s new TV series will aim to do on a regular basis. The show, titled “Verified With David Spade,” received a pilot order from Comedy Central on Tuesday and Howard told him he’s looking forward to seeing Spade on television again.

“We’re gonna shoot that in about a month,” Spade told Howard.

For more info on “Verified With David Spade” click here and be sure to pre-order his new Audible book “A Polaroid Guy in a Snapchat World.”