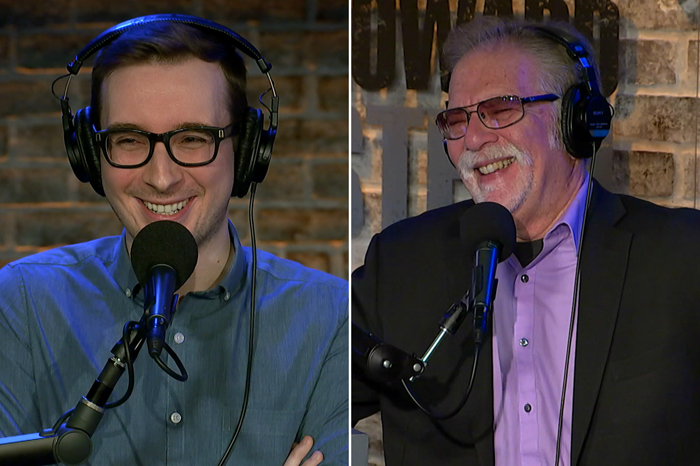 Has Ronnie Mund been misbehaving in the Stern Show back office again? That was what Howard wanted to know on Wednesday morning after learning his limo driver had been heard in the halls calling staffer Chris Wilding “Dick Ass.”

Chris came into the studio to assure Howard he had no problem with Ronnie or the new nickname Ronnie has for him. But Chris does still believe the 68-year-old could be a bit bi-curious and offered to prove it once and for all.

“Yeah, good for him,” Ronnie replied. No matter Chris’s bedroom abilities, Ronnie joked the Stern Show staffer isn’t what he’s looking for in another man. “He’s not my type … Jason Statham, that’s my type,” he said with a laugh.

Howard wondered if Chris would even be willing to hook up with Ronnie. “I don’t want to be with a 68-year-old dude for real, but on the air, as a goof? Yeah,” Chris replied, adding he’d have no problem making out with Ronnie so long as it happened in the studio.

It sounds like Chris hasn’t had any difficulty finding guys to fool around with outside of the studio, either. “I’m on a tear,” he admitted to Howard, confessing to recently servicing someone for so long, he actually threw his neck out. Although he was down there for 90 minutes, Chris said he was unable to bring this lucky fella to completion.

“Ninety minutes. I never heard of such a thing in my life!” Ronnie teased.