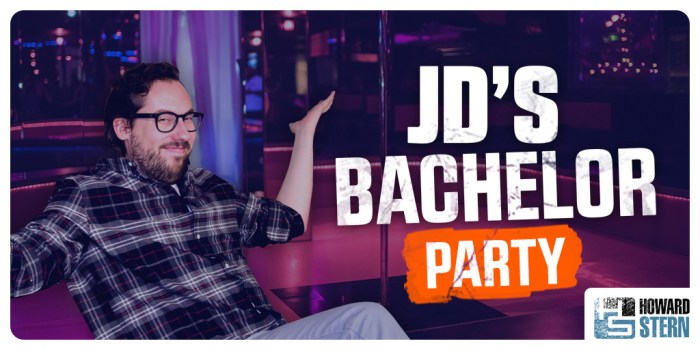 JD Harmeyer already had his off-air bachelor party a couple of weeks ago, but on Tuesday Howard announced the Stern Show staffer would be receiving an on-air bachelor party as well, complete with special guests and even more pre-wedding festivities.

Joining Howard to fête JD in the studio will be a few talented big-booty beauties who will compete for the bachelor’s attention.

“I learned something … he likes asses so big that when they move, the cheeks can clap and make a sound,” Gary Dell’Abate said.

For the very first time, Howard will also be talking to JD’s real brother, who was not able to make it to the first bachelor party but will be attending the wedding.

Additionally, Ronnie “the Limo Driver” Mund revealed he is in the process of writing a brand new poem for the event. While it’s not yet complete, he has settled on a title: “The Road to JD’s Wedding.”

Tune in to Howard 100 Wednesday morning for that and so much more!