These days, there aren’t many places Pete Davidson goes without his fiancée Ariana Grande, including Monday morning’s Stern Show. Though the superstar singer didn’t come into the studio with Pete, he told Howard she was just outside listening in the green room.

“We love being around each other,” the “Saturday Night Live” star explained. “She comes to support.”

After his and Ariana’s engagement was announced over the summer, Pete has reached a whole new level of fame. He told Howard getting used to the spotlight hasn’t been easy, but it’s well worth it if he gets to be with the woman he loves. “I definitely do miss, like, walking around,” Pete said about the new unwanted attention he receives from the paparazzi.

And though he’s no longer on social media, Pete said he’s aware of the online comments some make about him not being good enough for Ariana. He’s even received a death threat due to his relationship with her. “Someone wanted to shoot me in the face because she’s so hot. You know how insane that is? I was like, ‘Am I that ugly?’” Pete joked.

Pete also told Howard he knows just how lucky he is to have the affection of someone so beautiful. “It’s like I’m wearing V.R. glasses … It’s insane,” Davidson said with a laugh.

“Anytime we’re intimate I’m always apologizing and saying thank you,” he continued. “I’m so grateful that she touches me.”

Prior to making things official, Pete told Howard he even showed Ariana pictures of other famous men she could be with instead of him. “Before we started dating … I scrolled through a list of really hot guys on the internet, and I was like, you sure?” Pete said. “Here’s all of One Direction … you sure?”

While some on the internet seem stumped as to why Ariana picked Pete, others have speculated he won her over with his B.D.E. or “Big Dick Energy.” Pete didn’t give out his exact measurements, but he told Howard since Ariana is so small, nearly everything looks larger when it’s next to her.

“I think I have an average-size penis,” Pete said. “Everything’s big to her.”

No matter how much manhood Pete has in his pants, he confessed to Howard he was a nervous wreck the first night he hung out with Ariana. Grande’s manager Scooter Braun first tipped Pete off to Ariana being interested in him and the two made plans to meet up after she attended the famed Met Gala.

“I was fucking shitting my pants,” Pete said of how he felt while on his way to her place. Once there, the two spent a couple hours playing the game “Quiplash” with a few of Ariana’s friends. When everybody left later in the evening, Pete told Howard he made his move.

“I literally was like, ‘Hi, can I kiss you, please?’” Pete said with a laugh. 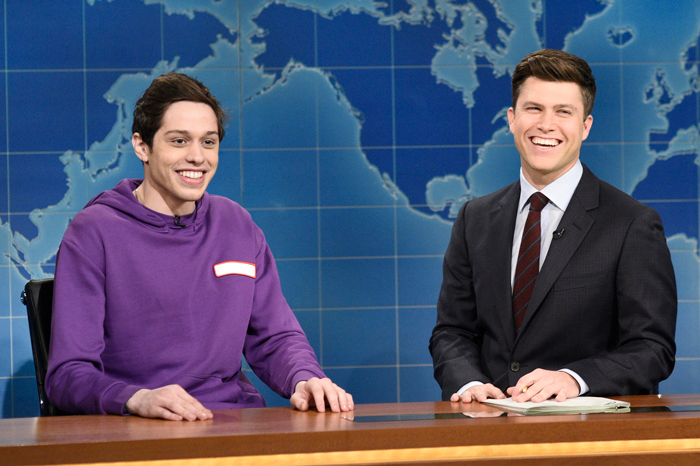 Pete Davidson and Colin Jost on Photo: Will Heath/NBC

It’s been reported Ariana’s crush on Pete began after she appeared as a musical guest on “Saturday Night Live” and that after first seeing him in an “SNL” writers’ meeting, she predicted he’d be the man she would one day marry. “I don’t know what it was but I’m just fucking lucky and I hope I don’t wake up,” Pete said of Ariana.

In addition to singing on “Saturday Night Live,” Ariana has also showed off her celebrity impressions on the late-night series and earned rave reviews for her performance, including from Howard who told Pete he often watches videos of those sketches.

Pete admitted he struggles with doing impressions on “SNL” and didn’t do any in his audition in front of the show’s creator Lorne Michaels. “I didn’t give a shit because I was like, ‘I’m not getting this,’” Pete recalled thinking. He was, of course, wrong, but even as Lorne was offering Pete a spot on the late-night series, Pete was trying to talk him out of it, telling Michaels he doubted he could handle working in such a high-pressure environment. He accepted the job only because he thought the gig would be short-lived.

“I thought I was gonna maybe be a writer and be fired after a year and I was like, ‘Sick! Peak! Peak life!’” Pete told Howard.

Now heading into his fifth season on “SNL,” Pete said he’s a bit more comfortable with being on the iconic TV series. “I’m just gonna go with the flow and see what happens,” he told Howard.

As far as how he got the chance to become a cast member on “Saturday Night Live,” Pete thinks he’s just been in the right place at the right time, even when he was just staring as a stand-up comic performing in a Staten Island bowling alley. Though that may not seem like somewhere an up-and-comer could be discovered, it’s where one of Nick Cannon’s friends saw Pete on stage one night, later telling Cannon how funny Davidson was. That led to a job on Nick’s MTV show “Wild ‘n Out” where Pete served as an on-camera performer. 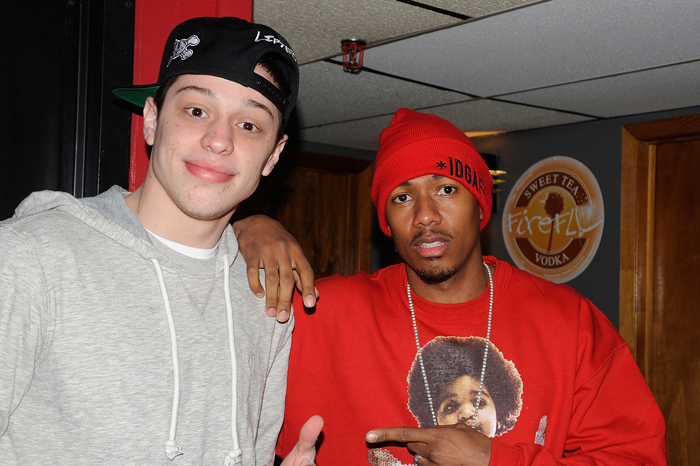 Pete then wound up on Amy Schumer’s radar and earned a small part in her 2015 movie “Trainwreck.” While on the set, Pete met Amy’s co-star Bill Hader and, though their conversation was brief, it was memorable enough for Bill to then recommend Pete for an audition at “SNL.”

“I was like, ‘Dude, that’s a bad idea,’” Pete recalled telling Hader since he had no experience in improv at the time.

His hectic “SNL” schedule prevents Pete from performing his stand-up as much as he’d like to, but he gets a chance to try out some jokes for an audience every once in a while. In 2015, Pete was on the dais at Justin Bieber’s Comedy Central roast, offering him the opportunity to skewer the international pop star in front of a live audience and millions watching at home.

“I don’t think there’s anything more fun than like rotten jokes,” Pete said of why he loves roast comedy so much.

But after attending the event, Pete said he actually grew to like and understand Bieber a bit more. “He actually, in my eyes, is a really nice kid,” Davidson said. “If I had $200 million and I was 18 years old, I would be getting into way worse shenanigans than what he’s been up to.”

One celebrity Pete has not met yet, however, is Oscar winner Jack Nicholson. While in L.A., Lorne once invited Pete to come over and hang with him, Jack, and “Mad Men” star Jon Hamm but as Pete told Howard, he didn’t want to take any chances of getting on Jack’s bad side, so he never showed up.

“I can’t live with Jack Nicholson hating me,” Pete said.