The one and only George Takei was happy to return to the Stern Show Monday morning and the Stern Show was just as happy to welcome him back. “I’m surrounded by my favorite people here,” George told Howard shortly after taking his seat in the studio.

It’s been over a year since George last stopped by for a visit and while there was plenty for him and Howard to catch up on, the two began by having a candid conversation about the sexual misconduct accusation George faced in November – an accusation George has always denied. George maintained he has no memory of ever meeting the former actor and model who claimed he was drugged and groped by George in the early ‘80s.

“I knew nothing about what he was talking about,” George told Howard on Monday. “That’s the farthest thing from anything that I would do. I was really upset by that.”

George relived learning about the accusation shortly before the international premiere of his Broadway musical “Allegiance” in Tokyo. He knew he would have to make a statement denying the allegations against him, but George told Howard he didn’t want to say anything that would also hurt the #MeToo movement as a whole since he’s a firm supporter of believing victims of abuse who bravely come forward.

When news of the accusation went wide, organizers of a previously scheduled speaking engagement considered cancelling on George, but he convinced them to reconsider, saying he hoped to address the controversy in his speech. “I began by saying, “How do you disprove something that didn’t happen?’” he recalled. By the end of his talk, George told Howard he received a standing ovation from the crowd present at the event.

Aside from his own unwavering denial, George also said journalist Shane Snow helped clear his name in a report published in the New York Observer. Snow interviewed George’s accuser on multiple occasions and wrote that his story seemed to change over time. Snow also worked with two toxicologists to verify the accuser’s claims, both of whom said it wasn’t possible this accuser could be drugged like he stated and still remember details from that night, let alone drive home like he said he did.

But George said the most disappointing moment throughout all of this was after a Japanese-American nonprofit organization whom he’d worked with in the past didn’t immediately support him following the accusation. The group even removed a video narrated by George from their website along with a statement explaining their decision to do so. The organization works to collect accounts from Japanese-American citizens who, like George, were placed in internment camps during World War II. George told Howard he was surprised to see the same people who fight for fair treatment of all individuals not give him his due process or hear his side of the story before cutting ties with him.

To say George has fought hard to make sure the stories of Japanese-American interment aren’t forgotten would be an understatement. “My mission in life is to raise awareness of this,” George told Howard. Though his Broadway musical “Allegiance” has now ended its run of live shows, audiences will be able to once again see George’s production when it returns to cinemas nationwide on Dec. 11. 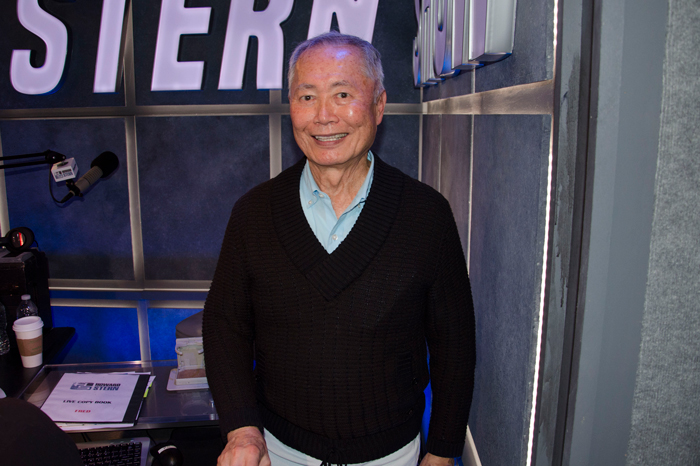 Something else George continues to work hard at is his personal health. At 81, he said he’s still doing his daily regimen of 100 sit-ups and 50 pushups. He’s realistic about his own mortality but he told Howard he doesn’t plan on leaving this earth anytime soon.

Should he ever not be able to take care of himself, George said he’ll of course have his loving husband Brad by his side but he also admitted he wouldn’t mind having a young, good-looking aide to look after him. And when his time does finally come, George revealed he wants to be cremated and have some of his ashes spread in the White Mountains of Arizona and the rest of him placed in the mausoleum space he and Brad have already purchased – the same mausoleum that Elizabeth Taylor and Michael Jackson are interred within. Until that day, George plans on staying busy and enjoying himself to the fullest.

“Life is exciting when you look at it as a precious gift,” he told Howard.