The time has finally come for Hugh Jackman to retract his adamantium claws once and for all. On Monday’s Stern Show, the superhero actor confirmed he will no longer play Wolverine in any future X-Men movies after the box office and critical success of 2017’s “Logan.”

“I feel good because I was really proud of that last film,” Hugh told Howard.

But as Stern Show co-host Robin Quivers pointed out, there’ve been plenty of people before Hugh who’ve said they were done with a certain role only to eventually reprise it later on. Should Hugh ever have a change of heart himself and suit up to play Wolverine once again, he promised he’d come on the Stern Show and tell Howard and Robin first.

Had it not been for fellow Aussie actor Russell Crowe, Hugh might never have starred in any of the X-Men movies. According to Jackman, it was Crowe who producers first wanted to play Wolverine but he turned the role down and suggested the then-unknown Jackman instead. Hugh admitted to Howard he’d not only never heard of the X-Men, he also didn’t know what a wolverine was.

“I didn’t know there was an animal called a wolverine,” Hugh said. “I came to set after studying wolves.”

The wolf training wasn’t necessary to play Wolverine but the gym training definitely was. Hugh told Howard how important his diet and exercise regimen was in attaining his superhero physique. He also made it clear he never used any steroids in order to bulk up, especially considering their undesired side effects.

“I don’t love Wolverine enough to shrink my balls to the size of a raisin,” Hugh said. 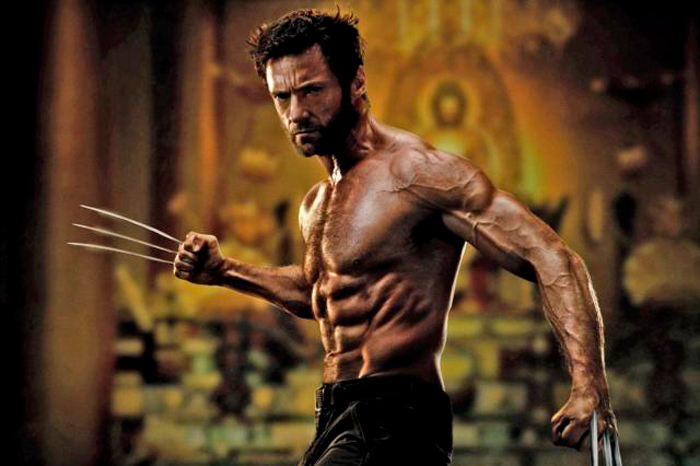 There were also some on-set tricks that helped make Hugh look more pumped up than he actually was. “If my hands are out of shot, I’m holding sandbags or 40-pound weights,” he revealed. And even though Howard read Hugh could bench press 350 pounds, Hugh confessed he couldn’t come close to lifting that much weight.

“It’s bullshit. It’s probably from me. I probably bullshitted,” Hugh said with a laugh.

His turns as Wolverine made him a worldwide movie star but Hugh told Howard there was another film franchise that he came close to starring in – the James Bond movies.

“I got a call from my agent saying, ‘They’re interested in you for Bond,’” Hugh remembered, though he suspects there were multiple actors being considered for the high-profile part at the time. After reading the script, Hugh felt the role wasn’t right for him and could potentially take up too much of his time. He passed and the 007 job went to Daniel Craig.

“I go to see ‘Casino Royale’ … I was like, ‘Oops,’” Hugh said of seeing the Bond sequel and realizing how good it turned out to be. 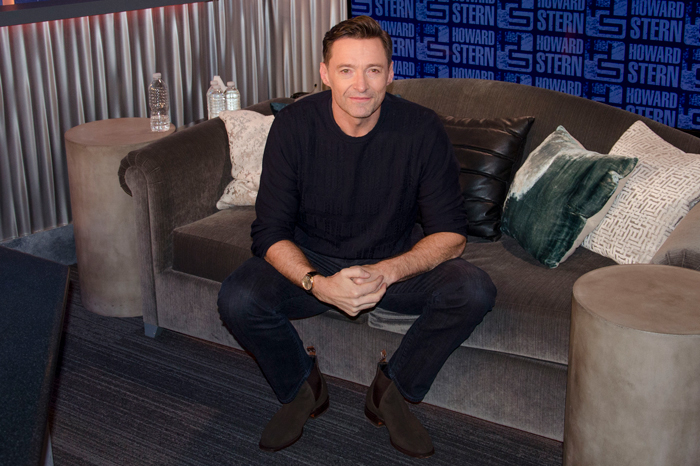 It was another film, though, that Hugh said he truly regrets turning down. When he was asked to play lawyer Billy Flynn in the movie musical “Chicago,” Hugh was in his early 30s and considered himself too young for the role. He said no to co-starring in the project but upon seeing the film for the first time felt he’d made a mistake.

“I really should have just said, ‘Let’s put some makeup on. Let’s go old!’” Hugh told Howard. The role eventually went to Richard Gere who won a Golden Globe for his performance.

Hugh caught the acting bug back as a young child while growing up in Australia. When his grandmother passed away, she left Hugh a few thousand dollars in her will, which he used to sign himself up for acting lessons. The training did not get off to a good start, though, as Hugh explained his instructor seemed to have it out for him.

“I must’ve been all-in because it was really shitty for the first few months,” Hugh said, telling Howard he was determined not to quit.

As bad as the reception he got in his early acting classes was, it was nothing compared to the heckling he received while working as a birthday clown. Hugh told Howard he had a hard time entertaining any child over the age of three since all he could do at the time was juggle. He recalled working an 8-year-old’s party once and juggling eggs.

“I remember the kid going, ‘Mom, this clown is crap!’” Hugh said. “It ended up with the kids having the eggs, throwing them at me, and that was working. They loved it.”

Eventually, audiences came to love Hugh. He starred in a number of Australian stage productions throughout the ‘90s as well as the West End production of “Oklahoma!” in 1998. The musical that earned him his most recognition came on film, though, in 2012’s “Les Misérables” which Hugh received his first Academy Award nomination for. The morning his name was announced as a nominee, Hugh’s publicist called him to tell him the good news but then told him there was no need for him to write a speech since he was up against Daniel Day-Lewis in “Lincoln.”

The publicist was right – Hugh lost that Oscar to Daniel Day-Lewis. But Hugh told Howard even with the odds not in his favor, he came to the Academy Awards that night with a speech in his pocket, saying he didn’t want to risk looking like “a dick,” unprepared at that moment.

“It’s your one chance, really, to thank the people who really made it possible,” Hugh said. “I was not making that mistake of being overwhelmed and forgetting my wife.”

His next shot at an Oscar nod could come as soon as this year in “The Front Runner.” Hugh portrays former presidential candidate Gary Hart who became the early favorite to win the Democratic nomination in 1987. That is until stories suggesting he was having an extramarital affair were printed in several newspapers, forcing him to suspend his campaign and abandon any plans of winning the White House.

Before production on the movie started, Hugh told Howard he wanted to meet with Hart so he could assure him the movie would by no means disrespect him or his family. Hugh flew to Colorado and wound up spending three days with Hart and his wife Lee at their ranch outside Denver.

“He makes a mean martini, let me tell you,” Hugh said of Hart.

In addition to his hospitality, Hugh said Hart gave him candid details about what it was like to have his campaign end the way it did and what he was planning to do in his first 100 days had he won the presidency.

“It was kind of incredible,” Hugh told Howard.

Hart told Hugh he had brokered a deal with then Soviet Union leader Mikhail Gorbachev that would have ended the Cold War before he was even sworn in as president. His first day in office would have actually been spent in the Middle East where Hart told Hugh he would stay until a peace agreement was signed between all warring factions and nations, even if it took him weeks of waiting around for other world leaders to get onboard with his plan. Next, Hart would turn his attention to domestic issues, telling Hugh he would have overhauled the American education system, refocusing on technology so that students would be better prepared to join the ever-changing workplace toward the end of the 20th century.

“He had so many brilliant ideas,” Hugh told Howard.

Following his personal scandal, however, Hart’s ideas, no matter how skillful or ahead of their time they might have been, were overshadowed by stories of his alleged infidelity. Hugh supposed it’s been especially frustrating for Hart to have no voice in the current political discourse.

“I think it’s been really, really hard for him the last couple years,” Hugh said. “He did share with me the anguish he feels every time he reads about a serviceman or woman being killed in the Middle East.”

Hugh was not there when Hart viewed a screening of “The Front Runner” though he heard the now 81-year-old approved of the film. In a testament to what kind of a candidate Gary Hart was, joining him in the theater was his presidential campaign team, all of whom flew to Denver to see the movie with him.

See Hugh Jackman in “The Front Runner” when it premieres in theaters nationwide Nov. 21.