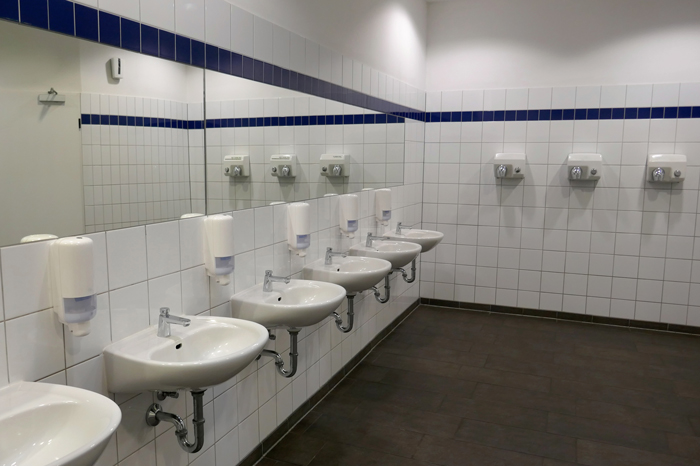 Howard and Robin fielded a call Tuesday morning from a concerned listener who read using a public restroom air dryer can actually result in getting fecal matter all over one’s hands. Howard, who recently shared his secret to success with the Toto toilet, offered up yet another bathroom trick which he thinks might circumvent the need for washing and drying one’s hands altogether.

Howard revealed he has figured out how to avoid touching his own manhood when urinating in public restrooms. His hands-free method requires planning ahead with tissues, balancing his penis on the elastic of his Tommy John underwear, and flushing the toilet with his foot. It’s a bit of a process, but one that allows him to avoid the filthy sinks and fecal-filled air dryers apparently common to public bathrooms.

“It’s a whole balancing act,” Howard told the caller. “I’m convinced that if I wash my hands in a public restroom then I’m actually getting more germs.”

Still, Howard wanted to be sure he wasn’t breaking some sort of unspoken rule by avoiding the sink altogether. “I haven’t touched anything in the bathroom. Do I need to wash my hands with filthy dirty water?” he asked co-host Robin Quivers. “I don’t think I do, but I don’t want to be a cretin.”

That answer put Howard’s mind at ease and he recommended the caller try his method the next time he had to pee in public, but Robin wondered how skilled a man would have to be to pull that kind of acrobatic feat off. “Can any guy do this?” she asked him.

“Well, you gotta practice,” Howard said with a laugh.