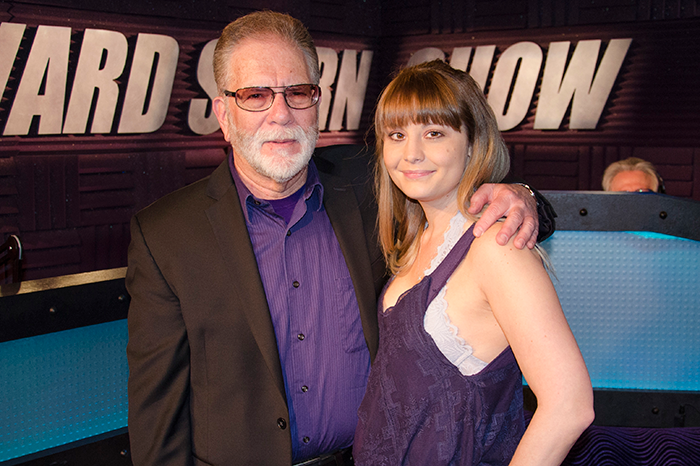 Stern Show fans rejoiced Wednesday when Howard announced he will be welcoming Ronnie the Limo Driver’s fiancée Stephanie back to the studio next week to catch up on everything happening inside the Mund household. And there’s a lot to catch up on.

As a preview for her appearance, Howard invited Shuli, who accompanied the happy couple to Florida, into the studio to offer insight on what he observed during their trip.

Shuli told Howard that, by and large, it seemed like there was constant bickering and anger between Ronnie and Stephanie, an assessment the 68-year-old limo driver disagreed with. “We goof around a lot,” he said. “We bust each other’s balls and curse each other out.”

The first such instance came right after they landed at the airport. “He won’t hold my hand,” Stephanie complained when Shuli noticed their friction. “He puts his hand there and I’m supposed to hang on to it,” she described of his limp technique.

Furthermore, while Ronnie delivered an unforgettable proposal to Stephanie live on the air in 2016, no wedding date has been set as of yet and when Shuli inquired about it, he deflected.

“Do you want the wedding soon or are you O.K. holding off?” Shuli asked Stephanie.

“She don’t give a fuck right now. She’s too busy,” Ronnie answered for her.

Robin Quivers took particular exception with Ronnie speaking for his fiancée, but Howard suspected he knew what was going on. “I think you’re becoming a big shot. Because when I first met you, you didn’t have all the fame,” he said. “You should be really grateful that Stephanie’s into you.”

While Ronnie protested the analysis, further evidence was presented when Shuli broke out tape of Ronnie taking control of the microphone and playing the role of emcee during a visit to a Florida strip club. Moreover, Shuli also had a recording of Ronnie screaming obscenities at his “friend” from the car window upon leaving the club (below).

“It was a party,” Ronnie rationalized.

The party didn’t end there, either. In the car ride home, Shuli witnessed proof that Stephanie can hold her own in an argument with her brash fiancé. During an attempt to find some late-night pizza, the two became embroiled in an argument about the GPS and directions. Hear them go at it (below).

Despite the good-natured ribbing, Ronnie insisted the behavior Shuli witnessed was an example of why he and Stephanie worked together. “That’s us. That’s the way we are. That’s why we get along,” he said.

Searching for some semblance of normalcy, Howard wondered if the two had any sweet nicknames for each other.

“Oh, there’s names,” Ronnie teased with a laugh. “Ask her. Wait until Tuesday.”