Rapper also recalls his first audition for Dr. Dre, shooting a music video with a nude Katy Perry, and the one celeb who can out-smoke him

Nearly nine years after his last Stern Show appearance, Snoop Dogg finally returned to the Stern Show Tuesday morning to talk with Howard not only about his new gospel album “Bible of Love” but also the new season of his TBS game show “The Joker’s Wild” which he hosts and executive produces. While Snoop has added several talents to his résumé aside from rapping over the years, he proved he could still flow and spit every single word from his songs as Howard played track after track of his biggest hits for him today. Snoop also shared whom he considers to be the best rapper of all time, who in Hollywood is the only person that can out-smoke him, and for the first time ever told the story of when Tupac Shakur showed up at “Saturday Night Live” with a bag of weed and Madonna.

Check out all of the highlights from Snoop Dogg’s interview with Howard (below). 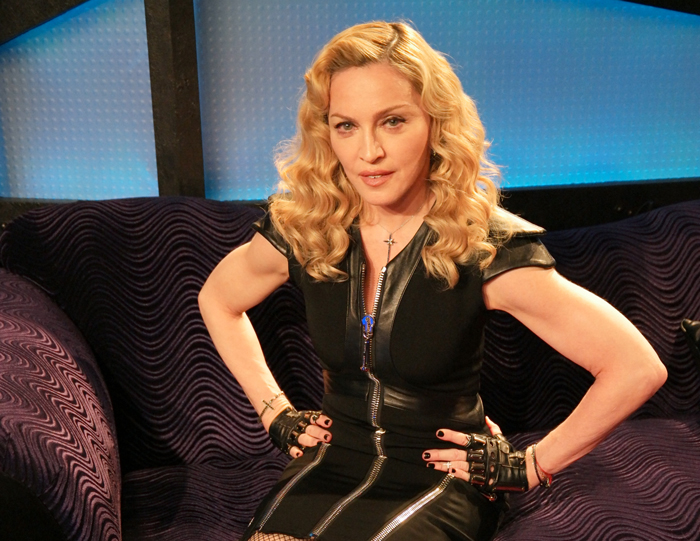 Madonna on the Stern Show in 2015 Photo: The Howard Stern Show

Weed wasn’t always so easy for Snoop Dogg to get his hands on. Once while hosting “Saturday Night Live” in the early ‘90s, Snoop was looking to score some bud and rang up his friend and fellow rapper Tupac to see if he could come through with some. Weed wasn’t the only thing Tupac brought with him backstage at “SNL,” though.

“He shows up with Madonna, man,” Snoop told Howard, adding this was the first time he’s ever told this story. “She looks at me, I look at her. I say, ‘Oh wow. That’s Madonna.’”

Snoop was glad to meet the “Like a Virgin” singer and, according to him, could tell just by the look in her eyes that she and Tupac were romantically involved.

As for Snoop and Tupac, they met at the wrap party for the movie “Poetic Justice,” which Tupac starred in alongisde Janet Jackson and Regina King. After Tupac got up to perform for the crowd, Snoop decided he wanted to rap a few of his verses as well, which led to what appeared to be a rap battle. If there was any hostility between them, it was soon squashed after the two stepped outside, shook hands, and shared a blunt.

“I smoked my first blunt with Tupac,” Snoop told Howard. “I’d never smoked a blunt before. I was smoking joints.”

The packed Swisher Sweet they split began a beautiful friendship between them, but that’s far from the first time weed has helped Snoop connect with a stranger.

“I’ve met so many people and established so many relationships over a fucking joint,” he told Howard.

On the night of Sept. 7, 1996, Tupac was gunned down outside of the MGM Grand in Las Vegas after attending a boxing match between Bruce Seldon and Mike Tyson. He died almost a week later but not before Snoop got a chance to see him in the hospital. Howard asked if he thought Tupac knew he was there.

“I think his spirit knew,” Snoop answered. “My spirit connected to his spirit.”

One Shot With Dr. Dre 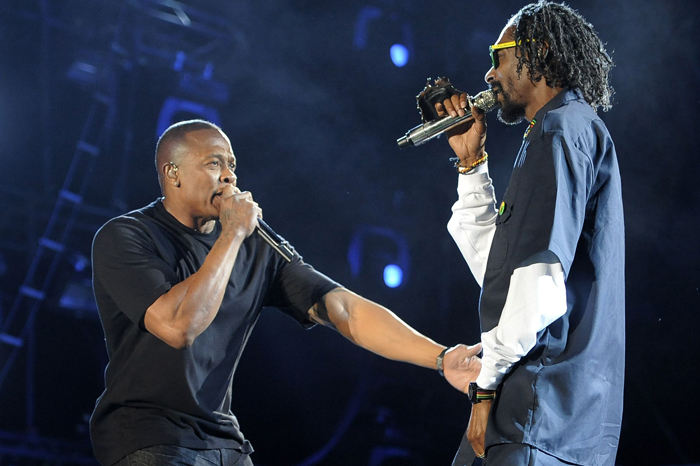 Being locked up behind bars would likely discourage most from following their dreams, but not Snoop Dogg. He told Howard how it was actually some of his fellow inmates who urged him to pursue rap music while he was serving time for selling drugs.

“A lot of ex-gang members were converting into rappers,” Snoop explained. He showcased his talents in prison rap battles, one of the few times that nearly all inmates would come together regardless of their race.

Once released, Snoop started making mixtapes of his music. Rapper Warren G got ahold of one and ended up playing it at a party he was at with Dr. Dre, a rising star in rap music at the time.

Dre liked what he heard and called Snoop up to try and set up a meeting. But when Snoop heard his voice on the other end of the line, he assumed it had to be a prank and hung up the phone. Warren eventually convinced Snoop this was real and that Dre wanted him to come in for a studio session.

Snoop showed up and performed a bit of his song “Gangsta’s Life” but over a James Brown backing track Dre had selected for him. “When I finished it, he didn’t make me do it again,” Snoop recalled. “Now that I look back at it, I was controlled. I was in the pocket.”

While he admitted to being a bit nervous ahead of time, Snoop told Howard once he got into the recording studio that day he was able to calm his nerves and give the performance his all. The fearlessness paid off and Snoop soon found himself recording with Dre again, this time on Dr. Dre’s new album. But not before another short stint in jail.

After Snoop’s aunt gave him a dose of codeine to help with a toothache, he failed a drug test thereby violating his parole. Back behind bars, Snoop continued to write lyrics, including the first verse of what would eventually become the hit song “Nuthin’ but a ‘G’ Thang.”

“I wrote that song actually in jail,” Snoop said. He and Dre stayed in contact while Snoop was serving time and eventually laid down the lyrics onto a beat Dre had been working on.

“When I got out, I didn’t fuck up no more,” Snoop said, telling Howard he cut ties with all drug dealers and gang members in order to focus all of his attention on working with Dre. “All I gave a fuck about was writing for him and making sure he was gonna be the dopest motherfucker that anybody ever heard.”

Not Before LL Cool J 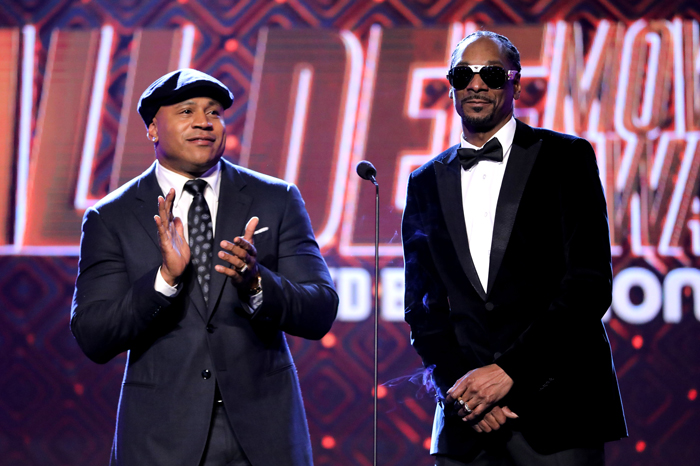 “If they put me in before LL Cool J, I ain’t going,” Snoop told Howard. “I would refuse to go knowing that there’s somebody who did it before and did it way better than me and inspired me to be who I am.”

Snoop also said he’d probably consider LL Cool J to be the greatest rapper of all time, though he also listed Slick Rick, Rakim, and Ice Cube as a few of the best MC’s as well. 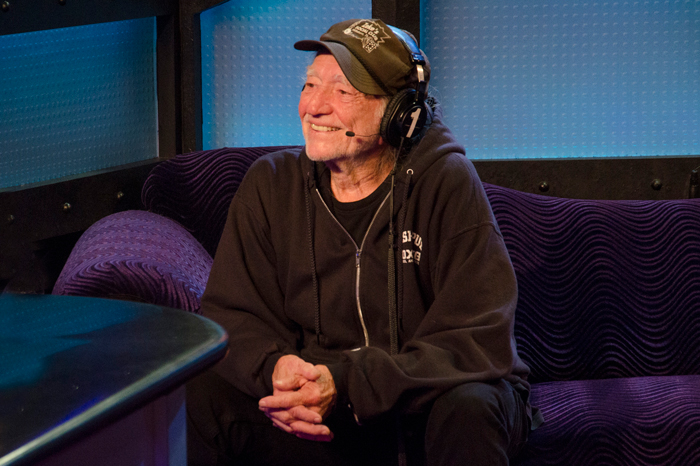 Willie Nelson on the Stern Show in 2012 Photo: The Howard Stern Show

Deciding who takes the title of greatest rapper might be tough, but Snoop knows for certain who is the greatest smoker he’s ever come in contact with.

“That fact remains true to this day … Willie Nelson is the greatest smoker of all time,” Snoop announced.

He and Willie have lit up with one another on several occasions, including a chance European encounter that occurred at just the right time in just the right place. “We were in Amsterdam together for 4/20 one year. Out of all places to be,” Snoop said with a laugh.

Snoop also remembered smoking with Willie one time on his tour bus. “I played dominoes with him and he beat my ass,” he told Howard. “He beat my ass while smoking with me and passing a blunt, a bong, a joint. I’m like, ‘Willie this is too much going on!’”

Why He Considers Katy Perry ‘A Gangsta’

No stranger to collaborations, Snoop Dogg has worked with several other artists in the past like Pharrell, Coolio, and Soulja Boy. In 2010, it was pop star Katy Perry who was looking to join forces with Snoop on “California Gurls,” the first single off her album “Teenage Dream.” The pairing was a peculiar one to some, considering her style of music and Snoop’s higher level of fame at the time, but it didn’t stop him from joining her on the track.

“You gotta spread love to get love,” Snoop explained.

Katy’s reasoning for writing the song started after Jay Z and Alicia Keys’s song “Empire State of Mind” became a smash hit in 2009. Katy told Snoop she was tired of hearing about New York and wanted to put out a pop song for the West Coast.

“I thought that was gangsta that she felt that way,” Snoop said of Katy.

He told Howard he showed up to the recording studio “high as a motherfucker” but was still able to lay down his rap track in one take. When it came time to shoot the song’s music video (above), Snoop was less than thrilled to see his outfit — a three-piece suit made out of candy. He was more willing to wear it, though, after stepping on the set and seeing Katy sitting on a bed of fake cotton candy completely nude.

Few would have thought Snoop Dogg and domestic diva Martha Stewart would have made such a swell match but ever since doing her daytime TV show a few years ago, Snoop told Howard he and Martha have remained very close, both personally and professionally.

While appearing together on the dais for Justin Bieber’s 2015 Comedy Central Roast (video above), Snoop admitted he was smoking for nearly the entire show and suspects Martha received a contact high since she was seated right next to him.

“By the time she gets up there to tell her jokes, she’s whacked out of her head but she steals the fucking show,” Snoop told Howard. “She was loose as a goose, high as a motherfucker, and she went up there and killed it.”

After finishing her set, Snoop told Martha he wanted to come up with a project for the two of them. Their respective teams came together and developed the VH1 series “Martha & Snoop’s Potluck Dinner Party” which premiered in 2016.

Trying His Luck on ‘The Joker’s Wild’

Season 2 of Snoop’s game show “The Joker’s Wild” is now airing on TBS, a dream job if ever there was one. Snoop told Howard about the series’ shooting schedule, saying they tend to tape two episodes a day. The questions he asks contestants are typically easier than the ones asked on other game shows, something Snoop said he appreciates.

“I don’t need to be Alex Trebek around here with these tough ass questions,” he joked.

The desire to host his own game show came about after Snoop competed on celebrity versions of “Family Feud,” “$100,000 Pyramid,” and “Who Wants to Be a Millionaire?” He did well on all three and told Howard he attributes that to being “high as fuck” at all of them. Since he had so much fun taping those game shows, he wanted to try his luck hosting one and put feelers out for a gig, eventually partnering with Michael Strahan (who co-executive produces) on “The Joker’s Wild.”

Howard told Snoop it’d been way too long since his last visit which Snoop chalked up to several years of scheduling issues. This time around, though, he made it clear he wanted to start his New York trip with a stop at the Stern Show.

“You guys have been part of my whole transformation,” Snoop told Howard and Robin.

He also had to tell them how much he appreciated the accommodations Howard sets him up with every time he drops by. “Can I thank you for the green room that you’ve always provided me for the past 20-some years?” Snoop told him.

Because he has so much respect for Howard, Snoop thought it best to ask before smoking some of his signature bubblegum-flavored weed while waiting to enter the Stern Show studio Tuesday morning. Of course, Snoop was allowed to toke up and soon the entire back office had a distinct bubblegum smell.

“The hallways smelled like … I’ve never smelled before,” Howard said with a laugh.