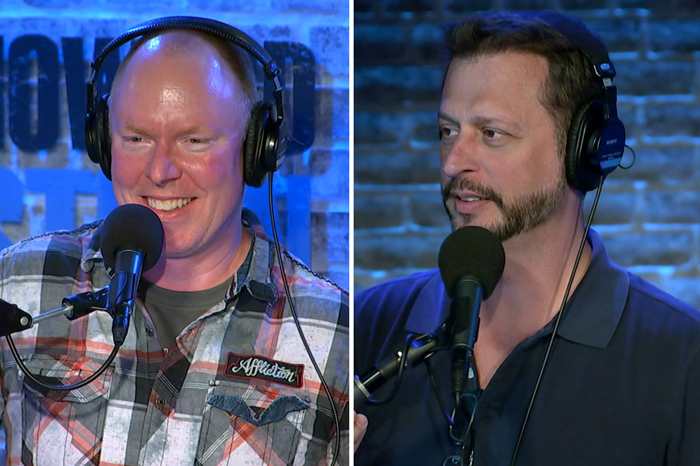 Now that the latest version of the SiriusXM app has launched, complete with new Stern Show videos, staffers Richard Christy and Sal Governale have been trying to come up with stunts to do on camera. As is normally the case, nothing is too outrageous for these two.

The first idea they pitched to Howard on Monday was a “heaviest diaper” contest that involved both Richard and Sal weighing themselves before strapping into some diapers to wear for the rest of the show. After a full day of urinating in their own pants, they’d then weigh themselves a second time and the one with the heavier diaper wins and gets to be changed by the loser.

Richard shared a strategy he thought up to ensure he’d have some extra heft in his diaper. “That’s why I want to shit. Like, Sal having to clean up, wipe me … is funny,” he explained.

Howard immediately put the kibosh on any defecating, but seemed receptive to keeping it a strictly pee contest.

Another segment might end up including fellow staffer Ronnie Mund. Ronnie has already admitted to inserting sex toys inside of himself off the air, but would he be up for Richard and Sal’s vibrating egg karaoke challenge? That’s when all three gentlemen have a vibrating egg sex toy inside of them while attempting to sing songs. The catch is that Howard is the one speeding up and slowing down the vibrations via a remote control.

“You can goof all you want, Robin, but these two boys keep reinventing the disgusting wheel,” Howard said with a laugh.

Stay tuned to the Stern Show and the SiriusXM app to see if any of Richard and Sal’s ideas come to fruition!