Def Leppard rocked the Stern Show studio once again on Tuesday morning, sitting down with Howard just a few days before the band’s long-awaited induction into the Rock and Roll Hall of Fame. Frontman Joe Elliott, bassist Rick Savage, drummer Rick Allen, and guitarists Phil Collen and Vivian Campbell tackled an array of subjects during their visit, including drawing inspiration from David Bowie and Queen, making their multi-platinum albums “Hysteria” and “Pyromania,” and how Allen persevered after a horrible 1984 car accident took his left arm.

The band also performed two live songs for Howard: a cover a Bowie’s “Ziggy Stardust” and a stripped-down rendition of one of their many chart-topping originals, “Pour Some Sugar on Me” (above).

Check out all of the highlights from Def Leppard’s Stern Show visit (below).

Singing ‘Happy Birthday’ With the Starman

Def Leppard listed quite a few musical inspirations during their conversation with Howard, like Queen, Marc Bolan of T. Rex fame, Thin Lizzy, AC/DC, and even punk acts like the Clash, but few entertainers shaped their trajectory quite so much as David Bowie.

“We were lucky we grew up in an era … we saw black-and-white turn into color,” lead singer Joe Elliott told Howard. “So, we saw Gerry and the Pacemakers or Herman’s Hermits and Tom Jones in black-and-white, and then we saw Bowie and Slade and T. Rex in color with all this glittery stuff. And it was mind-blowing – it was an absolute, you know, sensory overload on your eyes,” he continued.

Joe eventually performed alongside Bowie during a 1992 tribute to recently departed Queen singer Freddie Mercury. They—along with Mott the Hoople’s Ian Hunter, Mick Ronson, and the surviving members of Queen—delivered an epic rendition of “All the Young Dudes,” which Joe said also happens to be his favorite song and one of three tunes he wants played at his funeral.

But Joe and Bowie’s relationship actually stretches back a few years further. He told Howard his first run-in with the rock icon actually occurred at Bono’s house in 1990 after the U2 singer invited him to a barbecue at his home in Ireland. “He says, ‘Come with me, I want to introduce you to somebody,’” Joe recounted. “And he walks me up into this room where the snooker table is, and Bowie sat on the snooker table, and Bono says, ‘I thought you might just want five minutes.’”

“It was,” Joe laughed. “I thought I was being punked.”

“It got even better,” he continued, recalling Bowie then whisked them away in a Mini Cooper to surprise the Edge, Bono’s U2 bandmate, while he was out to dinner on his birthday. “We run into the restaurant, we sing ‘Happy Birthday’ to the Edge, and everybody’s giggling and laughing … Bowie’s totally instigating this, like a kid.”

Rock and Roll Hall of Fame Induction, Courtesy of Queen’s Brian May

The Howard Stern Show studios aren’t Def Leppard’s only stop while the British band visits New York City. On Friday, Queen guitarist Brian May will introduce them at the 34th Rock and Roll Hall of Fame Induction Ceremony at Brooklyn’s Barclays Center where they will join the ranks of so many of their idols.

It’s a long time coming for Def Leppard, which has sold over 100 million albums and toured the world many times over since forming in 1977 but somehow hadn’t yet been inducted. Howard wondered if they even cared about being recognized by the Rock Hall after being snubbed for so long despite possibly being the biggest band in the world at one time.

“Yes, we do now,” Joe laughed. “Now that we’ve been nominated and inducted and chosen, yes, we care.”

“It’s the same as the Grammys,” Phil Collen added. “When we had two diamond albums—two 10-times platinum albums—there was no category for us.”

The band believes its fans are one of the reasons for its 2019 induction. “In fairness, before the fan vote, I think it was a very elitist thing, which is why we kind of shied away … if you weren’t Lou Reed or R.E.M. or Loudon Wainwright III … no, no, they didn’t want us.”

The Rock and Roll Hall of fame wants them now, of course, and the guys feels honored to be introduced by May, one of the many artists who inspired them. “Queen is the blueprint for Def Leppard, really … so that’s what we wanted, it was just whether he could do or not,” Phil said.

Howard wondered if May’s guitar skills and innovations are underrated. “I’m only a bass player, but in my opinion absolutely, he’s one of the reasons I wanted to be in a band,” Rick Savage told him. 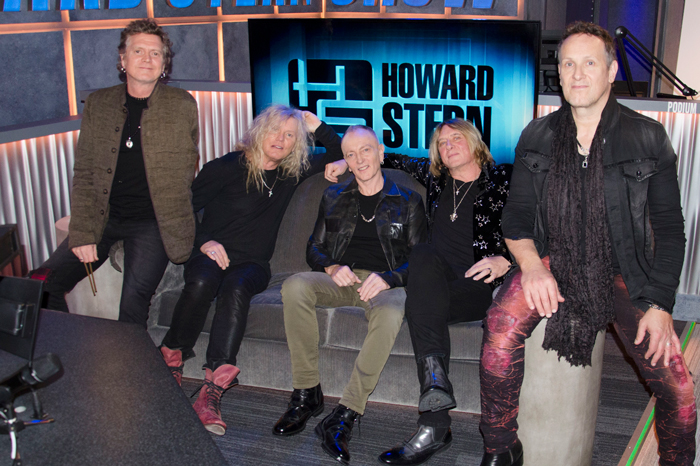 Def Leppard and frontman Joe Elliott in particular spoke to Howard all about his friendship with Led Zeppelin’s legendary lead singer Robert Plant. Joe admitted the two are these days far more likely to be caught talking soccer than they are music, but as Howard dug deeper it turned out not all the band’s stories involving Plant were quite so squeaky clean.

Robert apparently once attended a Def Leppard concert in disguise so he could help the band pull off a performance trick in which they were snuck onstage in a laundry cart so they could surprise their fans. The band normally had a crew member push the cart, but they recalled one time where Plant decided he wanted to lead the charge.

“We’re doing this gig in Chicago, which Robert came to see us at, and he said, ‘Let me do that!’ So he actually put a disguise on,” Rick Savage told Howard.

What was the rock and roll icon’s disguise? The band said Robert dressed up like a pirate, putting on a scarf and a leather jacket in the hopes no one would notice him pushing the dirty laundry cart out to the stage.

“We were in there pinching each other,” Rick said.

The ‘Difficult Birth’ of ‘Pyromania’ and Rick’s Phantom Limb

Def Leppard’s hit-filled 1987 masterpiece “Hysteria” sold over 20 million copies worldwide and remains one of the most successful albums in rock and roll history, but the recording process included more than its fair share of challenges.

“It was a difficult birth,” Joe recalled.

Things got off to a rocky start when Robert “Mutt” Lange, the super-producer who worked with Def Leppard on their 1983 album “Pyromania,” told the band he couldn’t work with them on “Hysteria” because he was “burnt out,” according to Elliott. The situation got infinitely worse after drummer Rick Allen was involved in a catastrophic 1984 car accident which resulted in him losing his left arm.

Howard wondered if Rick thought that tragedy might spell the end of his drumming career. “Yeah, I did,” Rick said. “It was horrible. I just wanted to disappear, but then really I found the power of the human spirit—and the guys, and my family, and everybody—was just behind me. It was really special.”

If there was one silver lining, it was that the accident may have been one of the catalysts for Lange rejoining the team. “And then when Mutt came to visit me in the hospital, I said to him, ‘Come and help us,’” Rick continued. “I don’t know if that had any influence on it, but he ended up coming back on board.”

Doctors predicted Rick would spend six months recovering in the hospital, but he was ready to make his comeback within just one month. He told Howard he left the hospital and immediately visited his friend Pete Hartley, who was already building some custom drum pedals for Rick and would eventually help him construct a new kind of kit that allowed him to continue rocking with one arm.

“I sat down for about three or four minutes, played the thing. I was exhausted because obviously I had been laid up in bed. That was it. It was like the spark,” Rick told Howard, adding he went home after that and slept for about a week.

Howard wondered if Rick ever felt the presence of a phantom limb after losing his arm and sure enough, he had. “There was this presence when I first lost my arm. There was this physical presence,” Rick revealed, adding it was “like static electricity was in the form of my arm.”

Rick said he couldn’t control his phantom limb, either, and it apparently once got overly cozy with one of his nurses in the hospital. “It kind of had a mind of its own. It would end up everywhere,” he told Howard. “It just so happened it ended up going up somebody’s skirt.”

“Wow, I don’t know what to say about that,” Howard remarked.

“Yeah, make sure your wallet is zipped up,” Joe joked.

For tour info and news about the band visit DefLeppard.com.