Actor also tells Howard about the extra security the F.B.I. told him he needed whenever coming and going from “SNL”

When the Stern Show studio door swung open on Wednesday and Howard got a glimpse of his guest Alec Baldwin, he instantly remarked how good his friend was looking these days. Alec confirmed he has indeed been working out lately, sticking to an exercise regimen recommended to him by one of his “Saturday Night Live” co-stars.

“Pete Davidson said, ‘Do 100 push-ups a day, every day … he’s ripped,’” Alec told Howard. Hitting the floor like Pete has paid off for Baldwin who added he’s now strong enough to do 125 to 150 push-ups daily.

As a father of five, Alec’s health has taken on a new importance for him. He had to have his left hip replaced after doctors discovered congenital dysplasia was causing a dislocation in his joint – he’ll have to have his right hip replaced later this year. Alec was able to describe the operation in great detail for Howard since he prepared himself mentally by watching an online video of the procedure, which only takes around 90 minutes start to finish.

“These guys are like mechanics at Indy,” Alec joked about his surgeons.

Alec admitted to some external enhancements as well, telling Howard he does his fair share of “man grooming.”

“There is no fucking way that Alec Baldwin ever takes a scissor to his bush,” Howard said in disbelief.

“You gotta clean up the yard” Alec told him. “You gotta rake the leaves, my friend.”

As a regular guest of the Stern Show, there’s not much Alec won’t talk about on the air with Howard. That included giving his side of the story of a recent dispute he got into over a parking spot in New York City. Baldwin was arrested and charged with assault after a man told police Alec punched him.

“Unfortunately for him, there were cameras everywhere that showed that nobody punched anybody,” Alec told Howard.

While Alec does admit the incident got heated, he explained he was more concerned about the safety of his wife and kids who were standing on the curb in front of the spot when the other man allegedly pulled his car in very quickly.

“I just felt that what he did was impolite, bordering on dangerous,” Baldwin said.

Even without any punches thrown, Alec said he’ll soon have to attend anger management classes. He’s been before and told Howard he learned something while sitting through a previous course.

“When you go to anger management you realize you’re not that angry,” Alec said, describing how his own anger didn’t sound so bad while listening to how irate someone else in the program got after receiving chopsticks instead of a fork with their takeout food order. 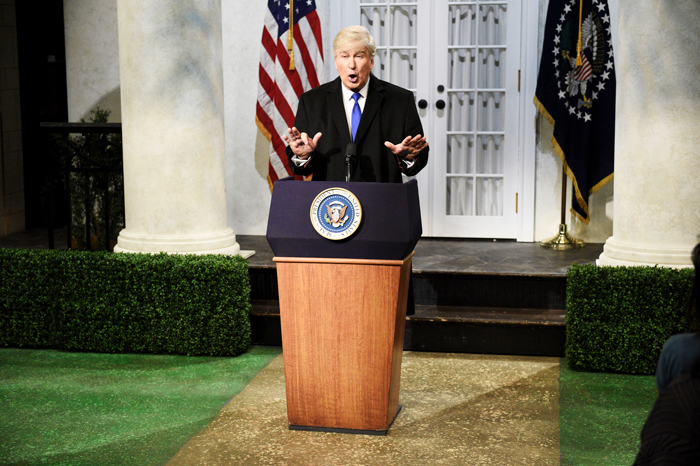 One might expect Alec to be angry over Donald Trump’s negative tweets about him, particularly those deriding the impression he does of the president on “SNL.” But Baldwin told Howard that’s not the case.

“When he tweets about me, I get … bewildered,” Alec stated.

When Trump won the White House in 2016, Alec expected the office would change Donald and his outlook on the world, but after two years on the job, he’s no longer hopeful that will ever happen. Nor is he hopeful of the president’s rhetoric healing the divide throughout the country.

Alec also revealed how his own safety was put at risk after F.B.I. agents discovered his and his wife’s names on the computer of Cesar Sayoc, a vocal Trump supporter who recently pleaded guilty to mailing pipe bombs to several of the president’s biggest critics. Authorities informed Baldwin he would need a police escort in and out of the building whenever appearing on “SNL.”

“Trump’s behavior doesn’t help,” Alec said of the threats against him.

Should Trump lose in 2020 and Alec lose his gig portraying him on the late-night series, he told Howard he wouldn’t be too upset.

That’s not to say Alec would stop working altogether – he continues to be one of the hardest working entertainers in the industry. He’s returning for another season of hosting the ABC game show “Match Game” this summer and has a docket of feature films being released in 2019. First up in theaters is “The Public,” a movie Alec co-stars in with Emilio Estevez, who also wrote and directed the film. After that, audiences will see Alec reunite with one of his “30 Rock” love interests Salma Hayek in “Drunk Parents.” Two of Baldwin’s other films will then premiere at the Tribeca Film Festival: “Crown Vic,” a crime drama he produced starring Thomas Jane, and “Framing John DeLorean,” an upcoming hybrid documentary in which Alec plays the titular role of the infamous car designer.

Alec prepared for his portrayal of DeLorean the same way he crafts all of his impressions. “You watch them with the sound off,” he told Howard, saying he’ll watch as much video footage as he can and mimic the person’s movement before trying to imitate their actual voice. “The voice comes last.”

He did a lot of watching while working with Robert De Niro on 2006’s “The Good Shepherd.” De Niro served as the film’s director and would sometimes pull Alec aside between takes to give him feedback.

“I would just stare at him,” Alec said with a laugh, telling Howard he couldn’t help but be in awe of De Niro. “After like 60 seconds I’d be like, ‘Could you say that again because I haven’t heard a single word you said. I’ve been too busy staring at you.’”