Howard returns from Tennessee without running into any snakes 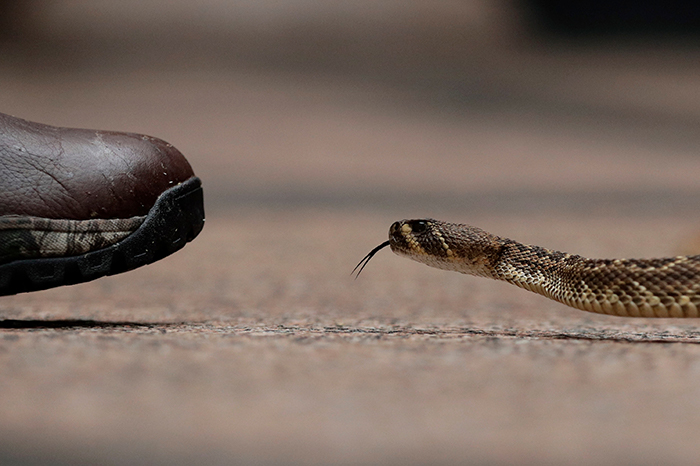 After purchasing anti-rattlesnake boots in preparation for the worst, Howard and his wife Beth Stern have returned from their trip to Tennessee … which wound up being 100-percent snake free.

According to a tour guide that Howard talked to, Tennessee is home to 34 different species of snakes, including four that are venomous. The guide also supposedly praised Howard for coming down south prepared.

As Howard described the boots and stockings he wore while in Tennessee, Robin recalled in detail seeing him wearing some of that gear to work … except according to him it never actually happened.

“There was something on your legs,” Robin said on Monday, insisting she saw Howard in his anti-snake boots. “You had something all the way up to your knees, they were thick.”

“Let’s not get hung up on this, but I guarantee you didn’t see these,” Howard insisted with a laugh. Executive producer Gary Dell’Abate also confirmed neither he nor anyone else in the Stern Show back office could recall seeing Howard wearing anything similar to what Robin was describing.

Howard went on to rave about his trip, insisting there’s no need to go to other places. “This country, there’s so much to see,” Howard gushed. “Beautiful part of the country and enjoyed it very much.”

Speaking of seeing the country, Howard reminded the audience the show will be in Los Angeles starting next Monday. “The first day we’re there it’s the kind of show where many people in show business are stopping by to welcome us to L.A., Robin.” Howard explained. “We just have three interesting shows we’re going to do and then I am going to do book promotion.”

Look out for more details on Howard’s trip as it gets closer!

VIDEO: Billie Eilish Reveals Why She’s Not Dating and How Her Early Brush With Stardom Helped Her Avoid Disaster