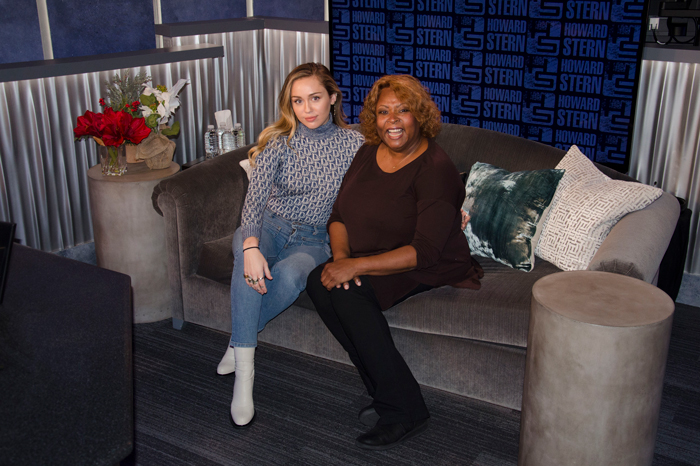 No one was more stunned to hear Robin Quivers announce her retirement from singing than her music producer Derek who said on Wednesday’s Stern Show he was “blindsided” by the news. Robin’s decision to call it quits came after she cut a duet of “Silent Night” with pop superstar Miley Cyrus. Though the song received rave reviews after Howard debuted it in December, Robin claimed the recording session was far less enjoyable than her previous experiences working with Derek.

“You talked about it on the air for three days. You made it sound like I had you chained to a radiator,” Derek told Robin with a laugh this morning.

Robin reminded everyone she felt Derek was over-directing her during their latest collaboration, but Derek explained his input was only an attempt to streamline the recording process. Robin wasn’t exactly easy to get into the booth that week, either.

“We were under a big time constraint,” Derek said. “Miley Cyrus was doing ‘SNL’ and Robin was harder to book for the session than Miley was.”

While the two were eventually able to talk through their differences at the recent staff holiday party, Derek admitted he tried to steer clear of Robin most of the evening. “I was petrified the night of the party,” he told Howard. “I was ducking her the entire night. I thought she was so mad at me.”

Robin has forgiven Derek but she’s sticking to her decision to stay out of the recording studio. “Right now I’m still retired,” she maintained. “I will continue to sing for myself.”

Howard suggested maybe he should take over as Robin’s producer but she immediately dismissed the idea, suggesting she is her own impresario … and always has been.

“Robin has been producing Robin and that’s where all the greatness has come from,” she declared of herself.