Producing a hit song isn’t easy, but if anyone can do it, it’s Mark Ronson. The multi-talented musician made his Stern Show debut on Tuesday ahead of his much-awaited studio session with Howard. Even though the track they’re working on is just starting to get off the ground, Mark is already hopeful this could be big.

“I think it’s going to be great,” he said, calling Howard’s “platinum voice” the one thing they’ll need to make a smash hit. Mark also revealed he’s recruited the rock band Haim to provide backing vocals for the song as well as some horn instrumentals from the Roots, Jimmy Fallon’s house band on “The Tonight Show.”

It seems fans everywhere are already demanding to hear the tune, too. Mark told Howard he recently ran into Natalie Maines who asked him for an update on how the song was coming. Fellow Stern Show celebrity superfan Jimmy Kimmel also pulled Mark aside to inquire if he’d finished Howard’s song yet.

Of course, Mark is also creating quite a bit of buzz at the moment with the song “Shallow,” Lady Gaga and Bradley Cooper’s duet featured in the movie “A Star Is Born.” Not only did it hit No. 1 on the Billboard Hot 100, it’s now the frontrunner to take home a Best Song Oscar at next month’s Academy Awards.

“I had a feeling this was going to be good,” Mark told Howard, explaining he was in the middle of producing Gaga’s album “Joanne” when she asked him to help her out making an original song for the film.

As Mark understood it, “Shallow” was originally going to be used for the movie’s end credits and wasn’t going to be sung by the two main characters. It was Bradley’s idea to turn it into a duet and the catchy tune then became a part of the film’s storyline. Mark revealed he still has some of the demo tracks of Cooper singing Green Day and Radiohead songs, joking he might have to sell them to the highest bidder someday if he’s ever hard up for money. 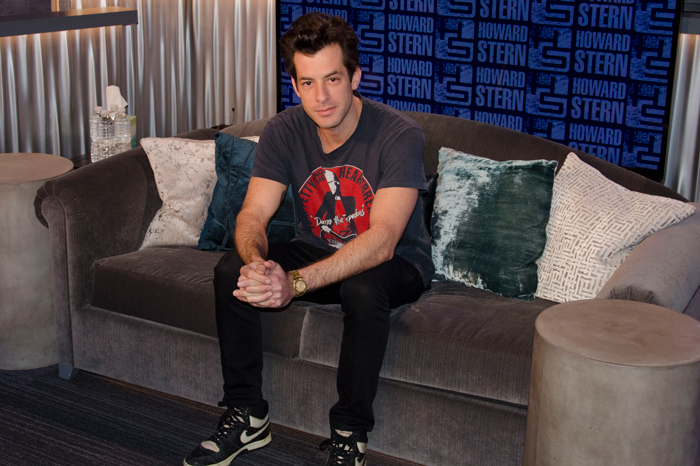 In the end, it only took Mark, Gaga, and Bradley two weeks to lay down the track for “Shallow,” but not all songs come together so quickly. When Mark was working with Bruno Mars on his other No. 1 hit “Uptown Funk,” the two were in the studio for about eight months, tirelessly trying to get the song sounding as good as it possibly could.

“I think the key is to make it sound like it took 10 minutes,” Mark said. “I learned that from Bruno … he’s the biggest perfectionist I know.”

One of Mark’s latest collaborations was with repeat Stern Show guest Miley Cyrus on their song “Nothing Breaks Like a Heart.” After seeing her perform “50 Ways to Leave Your Lover” on “SNL’s” 40th anniversary special, Mark knew he wanted to work with Miley, whom he called “one of the great vocalists of her generation,” but it took another four years before the two finally wound up in the studio together.

The pairing that may very well have put Mark on the map as a music producer, though, was his work with Amy Winehouse on her single “Rehab.” The two met for the first time on their way into a New York recording studio and while Amy didn’t recognize him, he told Howard he immediately recognized her signature beehive hairdo.

“We instantly, like, got on like a house on fire,” Mark said of his and Amy’s fast rapport.

Amy shared with Mark how she wanted to make music that sounded similar to the pop girl groups of the 1960s. Getting that retro sound he could do, but Mark next needed Amy to come up with lyrics and a song for them to lay down a track to. While out for a walk one day, she opened up to Mark about her previous problems with substance abuse, telling him things got so bad her family even tried to get her to go to rehab, but she said “no, no, no.”

“She said it with its rhythm and it sounded hook-y,” Mark recalled.

He suggested Amy try making a song out what she’d just said and what she brought back to him was a slow, bluesy track. In order to speed it up a bit, Mark said he gave her a fast-paced drum beat comparable to the old Shangri-Las hit “Leader of the Pack.”

The uptempo rhythm clearly worked – “Rehab” went on to become Amy Winehouse’s biggest hit of her too-short career, peaking on the Billboard Hot 100 at No. 9.

Mark’s knack for making hit music started at an early age thanks to his stepfather Mick Jones, lead guitarist for the band Foreigner. Growing up, Mark would see yellow legal pads full of song lyrics and recording notes lying around the house. Mick even supposedly wrote “I Want to Know What Love Is” for Mark’s mom, Ann Dexter-Jones.

Aside from his famous stepdad, Mark was also surrounded by other rock superstars and A-list celebrities throughout his life. From catching Bruce Springsteen searching for beers in his family refrigerator to being tucked into bed by comedian Robin Williams to even having a sleepover with Michael Jackson and his childhood friend Sean Lennon (son of John Lennon and Yoko Ono), Mark’s childhood was anything but ordinary.

It was even a rock star who supposedly saved Mark’s life as a kid. As his mother tells it, he was swimming in the ocean when a wave came along and nearly carried him out to sea. Thankfully, someone on the beach rushed into the water and pulled young Mark to the shore.

“I think it was Paul McCartney,” he told Howard. Mark admitted the details could have been exaggerated throughout the years, but he brought the incident up to Sir Paul while working with him on his 2013 album “New.”

“He actually vaguely remembered the story so I wasn’t able to charge him for any of the songs,” Mark said with a laugh.