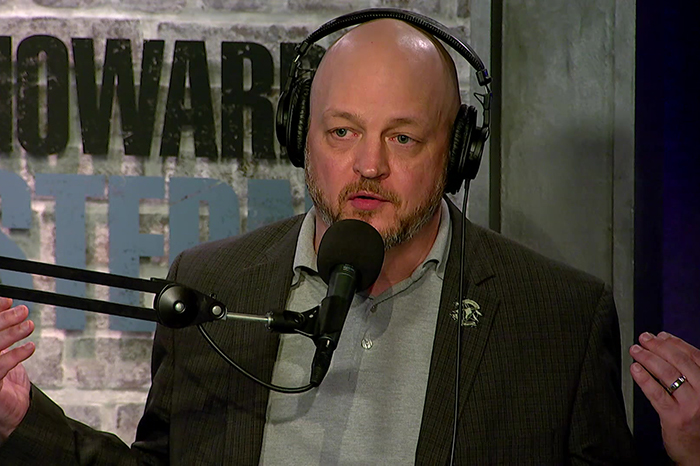 Discussing details for next week’s string of L.A. shows, Howard questioned Stern Show staffer Brent Hatley on Wednesday about his motivations for wanting to use a code name at the hotel he’s staying at.

“That’s just standard operating procedure,” he explained, saying it started back when he toured with Bubba the Love Sponge and fans would call his room at two in the morning.

While Howard understood the reasoning, he had a much simpler solution for Brent’s concerns. “You know what I do? I go under the code name Howard Stern and then I just say please put a ‘Do Not Disturb’ on all my calls until further notice,” Howard said. “Then you don’t have to use all your creative juices coming up with that code name.”

While not every staffer knows how they’ll spend their downtime in California, Brent has already made his agenda known. “Biggest plans I’ve heard for L.A. is Brent has a whole lockdown on these two women he’s going to fuck,” Howard said.

While Brent initially wanted to wine and dine his new female friends, Howard’s advice apparently set things on a slightly different path. “He’s just going to fuck … because I convinced him going on a date might be a bit much,” Howard said.

Fellow staffer and unofficial Brent correspondent Shuli Egar came in to express concerns of his own. “I don’t know man, I’ve got a weird feeling,” he said, agreeing with Howard’s worry Brent might strike out in L.A. while his wife Katelyn has fun with several guys back home.

But Brent insisted one of the girls he’s meeting is a “100 percent” sure thing. “She got in touch with me … said that she’d met me before in another radio market briefly, [and said] ‘Do you want to hook up?’” he explained.

To commemorate Katelyn’s plans while Brent is away, a song parody supergroup consisting of Eli Braden, Psych, Little Mikey, and Daniel Mendelson got together to record an updated version of “We Are the World.” Listen to the instant classic (below).