Snoop Dogg stopped by the Stern Show with actor Seth Rogen on Tuesday to welcome Howard to the West Coast and offer some advice to his staffer JD Harmeyer, who had planned on getting high later in the day for the very first time. But before the celebrity weed enthusiasts set JD straight on all things pot-related, Snoop opened up about everything from his latest film and music projects to the person he keeps on his payroll just to roll him blunts.

The most anticipated of those projects is perhaps “Dolemite Is My Name,” an upcoming biopic starring Eddie Murphy as the legendary ‘70s blaxploitation film star Rudy Ray Moore. Considering Snoop and Moore were friends before his death in 2008, Howard wondered how he felt watching Murphy portray someone he knew personally.

“He fucking killed it,” Snoop told Howard, adding, “I feel like Dolemite would’ve been proud to see that movie because they depicted it amazing. It was perfect—the story, the struggle, and Eddie Murphy was fucking—he was Eddie Murphy.” 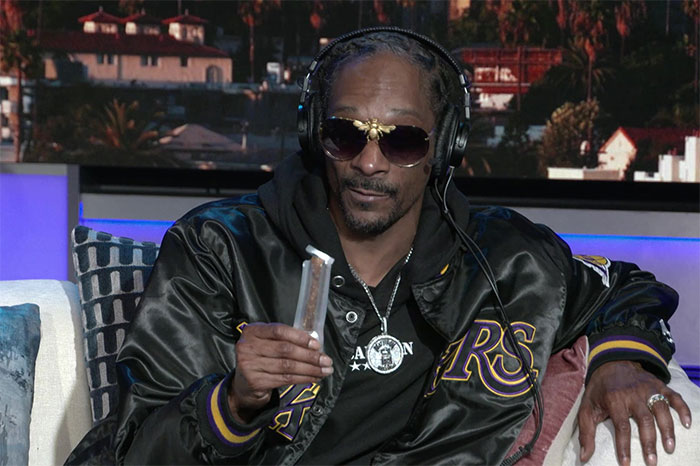 “Yeah, he really is something,” Howard agreed.

“I said it like this,” Snoop continued, “If you’re a kid and you grow up and you idolize somebody, and you get the opportunity to play them in a movie and you know everything about them, and you study them and then you have a great director and a great cast around you—it’s flawless.”

Seth admitted he was only familiar with the “Dolemite” franchise because, when he was a kid, he and his friends insisted on renting movies with interesting boxes. “I remember we saw the box for ‘Dolemite’, and we were like, ‘What the fuck is that?’ And we became obsessed,” Seth said shortly before he and Snoop started quoting lines from the movies.

“Dolemite fucked all the women, beat the police, and he lived at the end of the day,” Snoop concluded. “That’s my hero.”

As it turns out, Seth Rogen isn’t the only past Stern Show guest who’s gotten sky high with Snoop Dogg. The rapper and actor told Howard he also shared a joint with Oscar winner Matthew McConaughey on the set of their drug-fueled comedy “The Beach Bum,” though only of them was expecting to get stoned.

“Oh, I fucked him up,” Snoop told Howard, explaining he swapped out the “fake-ass Hollywood weed” with the real thing on their first day of shooting and passed it to Matthew, who had no idea.

Snoop’s fondness for making movies under the influence of marijuana isn’t limited to live-action roles, either. He stars alongside Charlize Theron, Oscar Isaac, Nick Kroll, and Chloë Grace Moretz in the upcoming animated comedy “The Addams Family.” On Tuesday, he revealed he was “high as fuck” while recording lines for his hair-covered character Cousin Itt.

“Did you ad lib some of your lines?” Howard wondered.

Though he’s playing Cousin Itt on the big screen, Snoop has someone on his payroll he says is more of a Lurch. The revelation came after Seth told Howard there’s a member of Snoop’s entourage whose sole responsibility includes helping Snoop and his friends get high.

“He knows how to gauge the look on someone’s face when it seems like they want a blunt, and if they do he gives you one,” Seth explained. “He’s got the best timing there is.”

“The motherfucker’s like Lurch from ‘The Addams Family,’” Snoop said. “You raaaang?”

Howard was blown away to learn someone could make a living rolling blunts and, according to Snoop, this guy pulled in between $40,000 and $50,000 a year in addition to a list of job perks which included traveling all over the world with Snoop and smoking as much weed as he wanted. “That’s his J-O-B. His occupation. On his resume, it says … P.B.R. Professional blunt roller,” Snoop explained.

“Did you go to Zip Recruiter and find him?” Howard laughed.

“Motherfucker was fresh out of jail,” Snoop said, explaining the guy got a lot of practice behind bars rolling the perfect blunt. “If you’re great at something I need, I’m hiring you.”

Howard also picked Snoop’s brain about the ongoing legal drama surrounding rapper Tekashi69, who was indicted last year on federal charges and recently sought a lighter sentence by testifying against two of his former alleged associates.

“Tekashi Snitch-nine. This motherfucker told on everybody,” Snoop told Howard. “He probably told on you, too.”

Snoop has previously spent time in jail, so Howard wondered what a celebrity like Tekashi might be in for after ratting out his coconspirators. “You know the rules and regulations of this shit,” Snoop said. “Snitches get stitches.”

“I’ve heard of people telling on each other … but he ratted on other organizations on top of his organizations,” Snoop continued. “His friends, his people—I mean, he just went berserk.”

“The Addams Family” opens Friday in theaters, “Dolemite Is My Name” arrives Oct. 25 on Netflix, and Snoop Dogg’s latest rap album “I Wanna Thank Me” is available now.