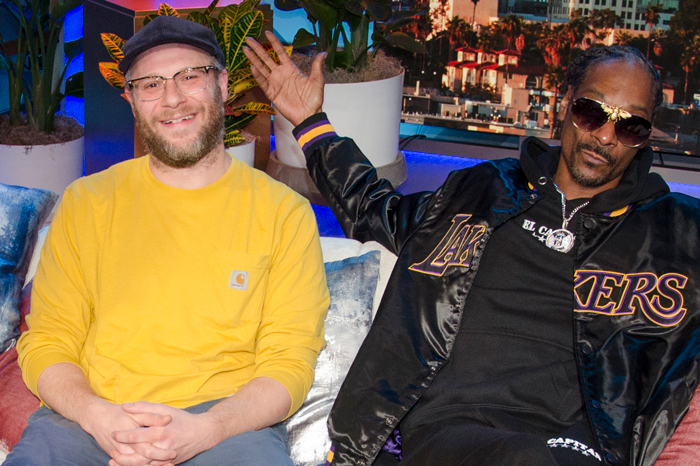 Seth Rogen swung by the Stern Show on Tuesday morning, welcoming Howard to Los Angeles during day two of his broadcasts from SiriusXM’s new Hollywood studios. The actor and producer didn’t sit down with the King of All Media to promote any new film or TV shows, however—he and legendary rapper Snoop Dogg dropped by to dispense some weed-flavored wisdom for Stern Show staffer JD Harmeyer, who was just minutes away from embarking on his maiden marijuana voyage.

Before offering JD his advice, Seth opened up about his latest weed-related hobby, telling Howard he’s been hard at work putting the “pot” back in pottery by crafting his own ceramic ashtrays tailor-made to hold his favorite joints.

“I’ve gotten pretty good at it, I gotta say,” Rogen confessed, later adding, “I give the joint the respect it deserves, which is like a little place to sit.”

Necessity is said to be the mother of all invention, and the proverb proved true in Seth’s case as well. “I realized I interacted with ashtrays more than almost any object in my life because I smoke weed all day,” he told Howard. “I interact with an ashtray like several thousand times a day, and then I was like what if I make the perfect one?”

Seth took a few lessons at the start, but now he and his wife have their own pottery wheel and kiln at home. “I made probably six ashtrays this week,” he said, explaining he’s also now creating vases as well.

“I do it almost every single day,” Seth said. “It’s all about centering … it’s like a physical manifestation of a mental place you want to be: which is centered.”

“So, you and your wife are like Demi Moore and Patrick Swayze in ‘Ghost’?” Howard asked.

“Exactly. Yes, a hundred percent,” Seth said, “She loves it. She’s done it since high school and has been trying to convince me to do it for 10 years.”

Seth confessed he’s enjoyed a variety of different hobbies in the past, from photography to shaping bonsai trees. He said the common denominator is his need to sometimes produce something physical, as opposed to his films and TV shows which to him feel intangible. “You create things that are physical things … and movies have no physical space they occupy,” Seth told Howard. “I think I long for some physical artifact of my work.”

While Seth has no plans to sell his ashtrays in stores, he told Howard several celebrities already hit him up in the hopes of getting their hands on one, including his recent “Long Shot” co-star Charlize Theron.

“I give it to my friends who ask for it,” Seth said before telling Howard he’d gladly give him a vase, instead, since he doesn’t smoke.

When Snoop stopped by later, he also made a point of complimenting Seth’s pottery skills. “I like your ashtrays, man … in fact, I want to come make one with you,” he said.

“Yeah, I would love that!” Seth responded.

Since Seth is a pot expert, Howard was curious if he had any thoughts on the vaping trend which has recently been linked to a string of serious illnesses and even deaths. “I don’t vape,” he told Howard. “I never vaped really because I never quite got what the fuck it was … with weed, I always knew pretty much what it was—you could see it.”

One of Seth’s concerns about vaping is how unregulated it is, at least compared to his home country of Canada where both marijuana and e-cigarettes are heavily scrutinized by the government. “Here, it’s like anyone can make that stuff, and you don’t know what that stuff is,” he concluded.