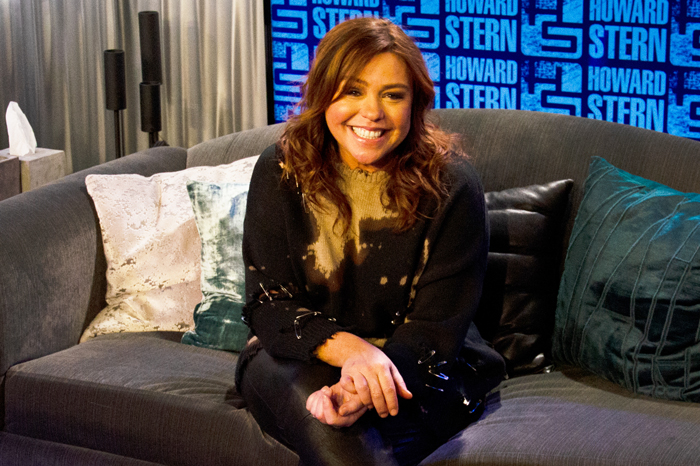 She hosts multiple TV shows, heads up her own home décor and furniture lines, and just authored her 26thpublished book, “Rachael Ray 50: Memories and Meals from a Sweet and Savory Life.” Rachael Ray is busier than ever … and she wouldn’t have it any other way.

“Do you ever sleep?” Howard asked his guest on Wednesday morning’s Stern Show.

“Very rarely and for very little,” she replied with a laugh.

With so much going on in her professional life, it would seem work simply doesn’t stop for Rachael. Around her home are notebooks strategically placed so that she always has somewhere to write down a new cooking recipe, sketch a new design, or capture a new on-air segment idea. She told Howard she even has a formal notebook that she takes with her in case something pops into her head while out at an event.

Her work in the kitchen began at a very early age. Rachael’s mother went from owning her own restaurants to running restaurants for others.

“My mom is a very hands-on mom,” Rachael told Howard. “She worked in restaurants but didn’t like her kids to be out of her sight and so we were literally all in kitchens from the time we were born.”

Just like Howard, one of Rachael’s very first jobs was working as a dishwasher. As grueling as the gig was, the two reminisced about how much they enjoyed cleaning dirty plates, glasses, and silverware.

“And you’re covered in food. I smelled like vomit,” Rachael added. “It’s a badge of honor, man.”

Eventually Rachael graduated from dishwasher to “fountain girl,” scooping ice cream for customers at one of the Howard Johnson’s restaurants her mom managed. She writes about her experiences there inside her new book in a chapter she called “The Girl With the Ice Cream Boobs.”

Because of Rachael’s short stature, she would have to lean into the freezer bin where the ice cream was stored. But running along the front of the freezer was a water stream that employees used to clean the ice cream off of the scoops after each use.

“When I would pull myself out of the ice cream bin … I would have a line between my boobs of melted ice cream,” Rachael explained. “It looked like I was lactating vomit.”

Her dedication to customer service continued on in Rachael’s adult life when she began giving cooking tutorials at a store in Upstate New York. Her now famous concept of 30-minute meals came to be while teaching people in person how easy it is to prepare food at home. A local news reporter from WRGB in Albany, N.Y., witnessed one of Rachael’s classes one day and recommended she start appearing on air, teaching viewers at home how to cook as well.

Rachael also landed deals for her own radio segments and eventually released her first cookbook. One day in 2001, with a snowstorm forecast to hit the Northeast, Rachael received a call asking her to be on the “Today” show with Al Roker since the weather caused every other previously booked guest to cancel at the last minute.

“I thought it was a joke. I hung up the phone,” Rachael told Howard.

Immediately following her debut on the morning TV show, Food Network offered Ray an opportunity to host not one but two shows on national television. Her program “30 Minute Meals” earned Rachael her first Emmy in 2006 and her profile continued to grow. So much so that eventually the queen of daytime TV herself took notice.

“A couple years after Food Network, I get called by ‘The Oprah Show’ to come on and cook with Oprah. I was literally speechless,” Rachael said. Her chance to appear on Oprah Winfrey’s iconic series nearly never happened though after her initial flight to Chicago was cancelled. Arriving late at her hotel and with nearly no time to spare before she was due at Oprah’s studios, Rachael recalled how she was crying in her room while frantically ironing the outfit she’d picked out for this big moment in her life.

“I show up and I’m just a hot mess and her hair and makeup people look at me with such pity, they almost start crying,” Rachael remembered. Her luck turned around once cameras starting rolling and Ray’s segment went so well, Oprah complimented her in the commercial break, leaning in and whispering to her “you’ve got it.”

She meant what she said – Oprah and her production company Harpo Studios went on to produce Rachael’s own daytime series, starting in 2006. Now in its 14th season, the show took home the Emmy for Outstanding Talk Show in 2019, the third Emmy Rachael and the show have won so far.

“I have to tell you she is delightful and has changed the course of my life and my family’s life,” Rachael said of Winfrey.

Though she and Oprah only ever hang out in a professional setting, Rachael told Howard she does have a handful of famous friends. She makes dinner for legendary crooner Tony Bennett often, though she told Howard one meal she served to him at her house got off to a bad start.

“I almost killed him one time,” Rachael said, explaining she’d polished her floor that day, perhaps a bit too much. When Tony went to take his seat at the table, his chair slid out from underneath him and he wound up on the floor, hitting his head in the process.

“Susan, his wife, said, ‘Don’t worry about it. He’ll pop right back up.’ He did and he ate double portions of his ossobuco,” Rachael told Howard.

She also counts Green Day’s Billie Joe Armstrong and his wife Adrienne as close friends thanks in large part to their mutual involvement in animal rescue. Rachael has been very active in the chimpanzee sanctuary Billie and Adrienne founded.

“You want to see something profound – you see an animal with about the same intelligence as a kid human be on the grass and out in the air for the first time ever … it’s incredible,” Rachael told Howard about observing these primates at the sanctuary.

Rachael has also donated her time and money to the North Shore Animal League, working with both Howard and his wife Beth in finding homes for dogs and cats in need.

“You know that I don’t work for money … I’ve given away more money in my life than I thought I would ever earn in 10 lifetimes,” Rachael said on Wednesday.

Howard wondered if being active in several animal charities has made Rachael reconsider making meals that involve meat. “I never promised people that I wouldn’t eat animals,” she replied.

That’s not to say that her diet hasn’t evolved recently. “We are very largely plant-based. We’re never gonna give up cheese and I don’t think John is ever going to give up salami. But several meals a week are vegetable-based,” she said.

She also makes a point of coming up with recipes for all people, whether they be vegetarian, vegan, following a keto diet, or following no diet at all. “That’s part of my job … we cook for everyone in my house,” Rachael said.

Rachael can’t cook everything, though. She told Howard there are two things she simply cannot make in her kitchen: coffee and toast.

“I burn bread. I set bread on fire constantly and consistently,” Rachael admitted. Since she’s usually making meals for several people, using a standard toaster isn’t an option for Ray so she tends to toast her bread using the broiler in her oven. As for her difficulty with coffee, Rachael said she relies on her husband John to work their coffee maker. Any attempt on her own and the coffee simply doesn’t come out right, no matter how hard she tries.

Trying hard did pay off for Rachael, however, leading up to her throwing out the first pitch at Boston’s Fenway Park. She excitedly told Howard how then Red Sox catcher Jason Varitek caught her ball with ease after she launched it straight over home plate.

“It didn’t touch the dirt and it was from the mound, proper!” she exclaimed. “I threw for six months to practice for that.”

If only Gary Dell’Abate had had the same experience when he threw out the first pitch at a Mets game in 2009. Unfortunately for the Stern Show’s executive producer, he threw the ball high and away, hitting a nearby umpire.

Howard asked Rachael if she thought a pitch like Gary’s should get him banned from ever coaching little league again. She chuckled while responding, “He should be inspiring them after the pitching coach is done coaching them.”

Click here to order your copy of “Rachael Ray 50: Memories and Meals from a Sweet and Savory Life.”