The Stern Show brought High Pitch Erik into the studio on Monday for a weigh-off, but instead of calculating his weight in pounds Howard wanted to see how many copies of his recent bestseller “Howard Stern Comes Again” the Wack Packer was equivalent to.

Making the measurement possible was an enormous, custom-built contraption so large it not only was able to hold Erik on one end but also hundreds of copies of Howard’s 500-page book stacked high on the other end.

The weigh-off had a bit of a circus vibe with High Pitch dressed like a strongman, staffer JD Harmeyer dressed like a carnival barker, and Executive Producer Gary Dell’Abate dressed like a ringmaster. “I’m ‘The Greatest Showman,’” Gary explained, referring to Hugh Jackman’s character in the 2017 movie musical. 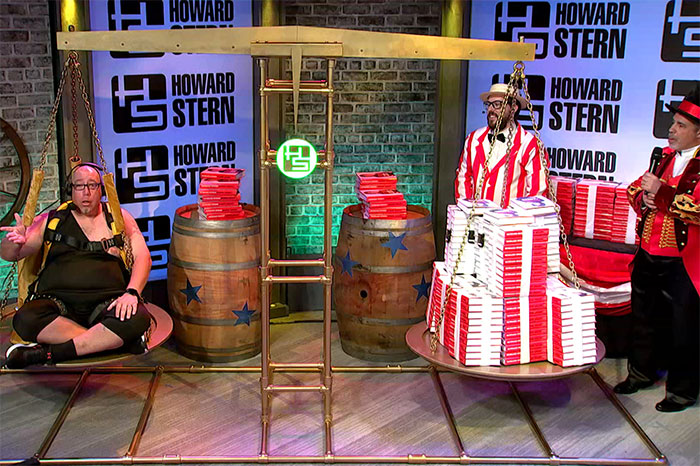 Before getting started, several staffers offered up a guess as to how many copies of Howard’s book Erik would weigh—Howard guessed 75, Robin settled on 120, Shuli Egar said 115, Fred Norris went with a whopping 400, and Erik himself guessed 150.

“Fred’s out of his fucking mind,” High Pitch said.

Getting High Pitch onto the rig wasn’t easy and he needed to be strapped onto the scale so he wouldn’t roll off. JD added a stack of 10 books at a time to the scale, but Erik didn’t budge at all early on.

“He’s flat on the floor,” Robin said as they passed 90 books.

After getting into triple digits, the Wack Packer finally began to move. Erik caught air at 130 books, but still the scale was not yet even. JD proceeded to add one book at a time until the light on the scale turned green, signaling both sides were balanced. At 133 copies of “Howard Stern Comes Again,” Robin’s guess came the closest. 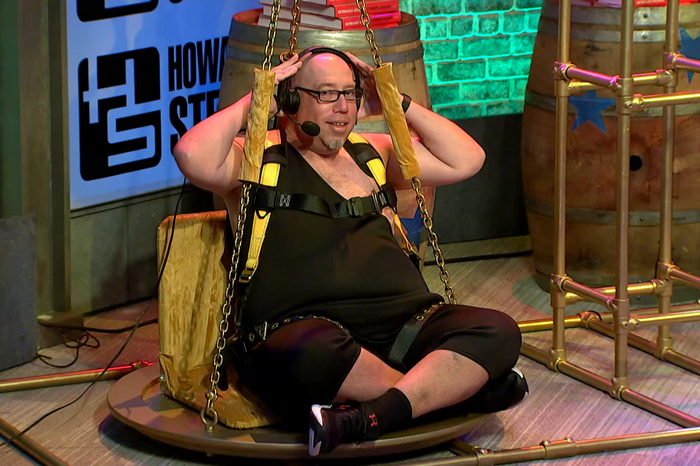 As it turned out, getting Erik off the scale was even trickier than getting him on and it took four guys to get him down safely. “He’s fucking heavy,” Gary said.

Erik disputed the results and asked to step on a conventional scale instead. Howard found one, and the Wack Packer weighed in at 321 pounds.

Howard also had Shuli update listeners on Erik’s latest vehicular escapades, even playing clips from a drive Shuli took with him while the show broadcasted from Los Angeles. Needless to say, the Wack Packer still doesn’t appear to be following the letter of the law. According to Shuli, Erik has already amassed 16 tickets for speeding and running red lights. “That’s $800 worth of tickets,” Shuli explained.

“I literally think he’s the only one doing videos on that site anymore … He has like 10 a day,” Shuli said, adding that High Pitch has also recently spent money on first-class accommodations to L.A., a luxurious cruise to Cabo San Lucas, and $1,000 worth of cigars.

His rental car experience in L.A. got off to a bad start when Erik was given a car that was much too small for him. He could squeeze himself into the driver’s seat, but apparently not without his belly getting pressed up against the steering wheel. “His buddy told me every time he’d breath the horn would honk,” Shuli recounted.

High Pitch eventually talked his way into a spacious SUV, but things didn’t go much better in that vehicle after he picked Shuli up so the two could go for lunch. “Within a minute of driving, High Pitch nearly got in an accident. His road rage was on full display,” Howard explained before playing several expletive-filled clips from their tumultuous drives together.

In addition to speeding, not wearing his seatbelt, cursing out other drivers, yelling at street performers dressed like Wonder Woman and Catwoman, honking his horn, and hitting up the Chick-fil-A drive thru for three sandwiches at a time, Erik apparently also nearly ran over a homeless person while driving through Los Angeles. “It wasn’t my fault,” High Pitch told Shuli. “It was dark outside. I couldn’t see him.”

Moreover, he also apparently endangered the staffer when turning into oncoming traffic. Shuli confessed it was the scariest moment of their drive.

“Oh my God, it’s a disaster,” Howard said after hearing the clips. 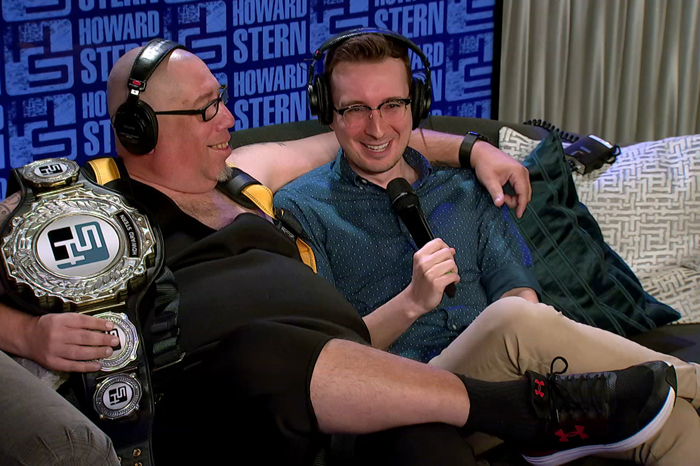 While High Pitch’s antics behind the wheel left the rest of the driving world with plenty to think about, the Wack Packer himself is focused on something else. He recently broke up with his girlfriend and since then has been thinking a lot about Howard’s Canadian staffer Chris Wilding, who gave Erik a leg massage to remember late last year.

Erik recently sent Chris a picture of his manhood and on Monday admitted he would gladly marry the staffer, if only to prevent him from having to return to Canada. However, Erik did grow concerned after he was informed about what married couples usually do on their wedding night. He feared hooking up with Chris would equate to betraying his longtime “Blue Bloods” crush Donnie Wahlberg.

Chris came into the studio to share his side of the story and High Pitch immediately propositioned him. Not only did the Wack Packer ask Chris to be his Thanksgiving dinner date, he also asked for another massage and revealed he’d allow Chris to give him oral pleasure while driving.

High Pitch sat with his arm around Chris for the remainder of their conversation and eventually asked him for a kiss. The staffer opted to play with Erik’s nipple instead.

High Pitch was apparently smitten. “You gotta see this on the app,” Howard said. “Erik, you are in love.”

Click here to get your own “Howard Stern Comes Again” book weight!