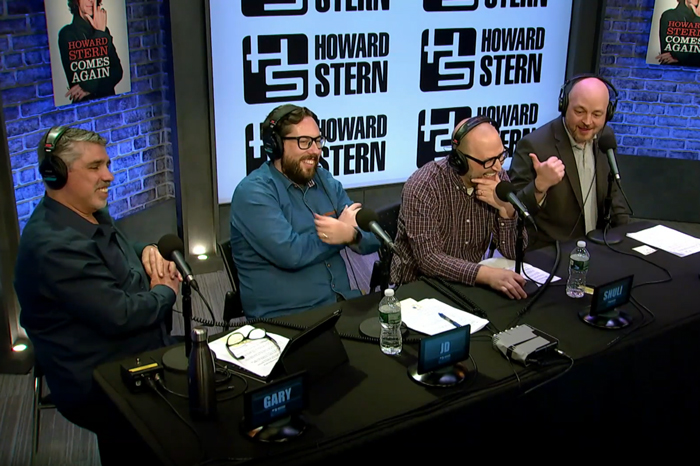 Howard brought his staff into the studio on Wednesday to help him once again “clean out the computer” and play a few packages they’d worked hard on but that hadn’t yet made it to air.

Brent Hatley shared what it was like attending last year’s Radio Hall of Fame Induction Ceremony to support Kid Kelly, who the Stern Show helped to get in. Brent recorded several clips from the event, including an induction speech from Q104.3’s Jim Kerr and a lengthy introduction from SiriusXM’s Cousin Brucie. He also made the case for why both Gary and Fred Norris should be inducted, though his colleagues were more curious about why Brent was so obsessed with the Radio Hall of Fame in the first place. “It’s our artform. It entertains millions of people every single day,” Brent said. “I think it should have the same level of respect as the Rock and Roll Hall of Fame has.”

Shuli Egar’s package was comprised of recent Bobo voicemails. The longtime caller had apparently left messages for virtually every Stern Show staffer he knew, bragging about himself and his awards in the hopes those accomplishments would somehow make their way onto the show. Shuli finished with a clip in which he repeatedly asked Bobo to turn down a loud and distracting TV. After asking him three times, Shuli finally realizes Bobo was just pretending like he was near a TV and had in fact been out in public the whole time.

JD Harmeyer, meanwhile, had a game for Howard to play. He gathered clips of various reporters, hosts, and TV guests raving about “Howard Stern Comes Again” and asked the King of All Media to try and guess which ones refused to say its full title. Though Howard did guess each one correctly, he was shocked to learn so many people were too timid to say “comes again” on the air.

“That’s why it’s the perfect Christmas gift,” Howard concluded with a laugh. “When my book is laying on your coffee table and it says ‘Howard Stern Comes Again’ … it provokes conversation.”