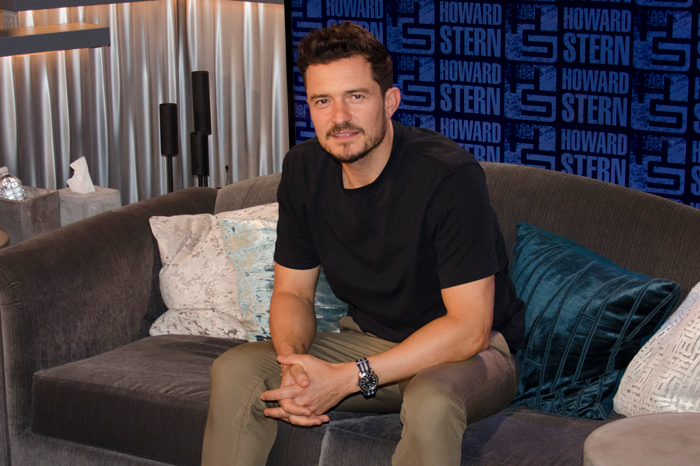 Orlando Bloom made his Stern Show debut on Wednesday, sitting down with Howard for a wide-ranging conversation touching upon everything from his early days as an actor and first big breaks in Hollywood to his new Amazon Prime Video series “Carnival Row.” The British actor also opened up about his much-anticipated wedding to recording artist and fellow Stern Show guest Katy Perry.

Orlando told Howard he moved London at the age of 16 to pursue his dreams as an actor and his big break came just a few years later when at the age of 20 he landed a leading role in Peter Jackson’s blockbuster adaptation of J.R.R. Tolkien’s beloved “Lord of the Rings” trilogy.

Though Bloom’s name is now synonymous with Legolas—the films’ bow-wielding elf who helps lead a band of humans, hobbits, and dwarves past an army of orcs to destroy a cursed ring—Orlando told Howard he originally auditioned for the much smaller part of Faramir, a character who doesn’t even appear until the second film. Fortunately, Jackson, his wife, and the casting directors saw something more in Orlando and invited him to try out for a much bigger part. After multiple auditions, both in person and on tape, they invited him to accept a role that would change everything.

“It’s the greatest gift of my life,” Bloom told Howard of his opportunity to star in the “Lord of the Rings” franchise.

Signing on to the trilogy meant moving to New Zealand for 18 months to shoot all three films at once, but for Orlando it was a “magical time” and a dream come true. Not only was he doing what he loved alongside a cast of greats like Christopher Lee, Ian McKellen, Ian Holm, and Cate Blanchett, but he was treated like royalty on set and given both a per diem and a Nissan Skyline to get him around town.

If Orlando Bloom wasn’t a household name after “Lord of the Rings” hit theaters, it certainly was by the time the Disney-backed “Pirates of the Caribbean” franchise set sail in 2003. But on Wednesday he told Howard he very nearly turned down a starring role in “The Curse of the Black Pearl.”

“I said to my manager, ‘Who wants to do a movie about a Disney pirate ride?’” Orlando recalled.

Thankfully, he possessed the good sense to listen to his Oscar-winning “Ned Kelly” co-star Geoffrey Rush, who told him climbing aboard the “Pirates” ship was the smart move to make. Orlando told Howard he later knew it was the right decision when Johnny Depp agreed to play Captain Jack Sparrow. “I was like, ‘Listen, I will do this just to be in his presence to see what he does and how he does it,’” Orlando said.

Howard was curious about his relationship with Depp, who Orlando described as “disarmingly charming and so great on set.” Bloom said the two grew close after working on three massive projects together, but they don’t still hang out regularly. “If I see him, we look at each other and it’s like you’ve walked a path with somebody,” Orlando told Howard. “Do I call him and go out for a drink? No. Do we go out for dinners? No.”

Orlando said he isn’t disappointed they don’t spend much time together off camera, especially considering their mutually hectic schedules. “Life is life,” he said. “Busy people are busy.” 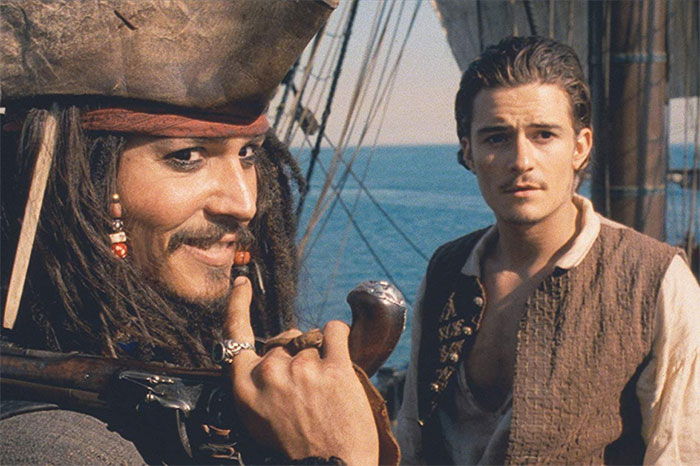 Johnny Depp and Orlando Bloom in “Pirates of the Caribbean: The Curse of the Black Pearl” (2003) Photo: Disney

And he should know—few actors were as busy as Orlando between 2001 and 2007 when he starred in not only those two colossal trilogies but also Ridley Scott’s “Blackhawk Down” and “Kingdom of Heaven” and Wolfgang Petersen’s “Troy.” He said his “Troy” co-star Brad Pitt tried putting Orlando’s unfathomable career trajectory into perspective for him when they saw each other at Cannes Film Festival in 2004, but it wasn’t something he was ready to comprehend.

“He was like, “Wow, man, I’ve never really seen a run like it.’ I didn’t really know what he was talking about. Until now,” Bloom explained.

One opportunity Bloom hasn’t yet seized is the chance to host “Saturday Night Live.” He was offered a crack at NBC’s late-night sketch comedy series about a decade ago around the time he was promoting “Pirates of the Caribbean: At World’s End,” but he turned it down.

“I was really insecure at the time,” Orlando told Howard, saying his decision was based in part on his lack of perspective at the time.

“If they asked you now you would do it?” Howard wondered.

Orlando opened up about several important relationships on Wednesday, including one forged in the North African desert while working on “Kingdom of Heaven.” That’s where he rescued his longtime canine companion Sidi.

“He was a good boy,” Orlando told Howard. “He just was a wonderful animal.”

“I rescued him in Morocco in a desert,” he continued. “I see this puppy in a desert eating camel dung out of a box.” He admitted rescuing a dog during a grueling film shoot wasn’t easy and it often kept him up at night, but the two were soon inseparable and Sidi even wound up joining him on later film shoots.

Sidi succumbed to liver failure at the age of 12 and Orlando said it was the hardest he ever cried in his life. “I just couldn’t stand the idea that he’s just not gonna be around anymore,” he explained.

But Orlando has managed keep the dog with him, and not just in his heart. When the animal was dying he found a company which could preserve its skeleton, and now he keeps Sidi’s remains in his house by a window.

“It looks like he’s running outside. When I see it I smile and I think of him, it makes me happy,” Orlando told Howard.

Of course, no conversation with Orlando could be complete without mention of the legendary 2016 tabloid photos which showed Bloom and Katy Perry paddle boarding on vacation in Italy. The paparazzi cameras captured the actor manning the oar while completely naked and it wasn’t long before uncensored images of his manhood made their way across the internet.

“Were you upset when that occurred?” Howard wondered.

He told Howard the drama surrounding the photos unfolded in a series of waves, starting with a call from his publicist clueing him in about their existence. “First there’s the photo with the block over it and you make some jokes—‘Well, I hope they got a black box big enough to cover it,’ … And then suddenly you realize that somebody is going to uncover the black box because they’re going to get paid enough money.”

The actor was also quick to point out fans needn’t Google paparazzi pictures to get a glimpse at his body. They can simply stream his new Amazon Prime Video series. “I do get my butt out in ‘Carnival Row,’” he told Howard.

That’s not all he had to say about “Carnival Row,” a fantasy noir series he stars on about a human detective who partners up with a beautiful winged faerie to solve crimes and ease the rising tensions between humans and the oppressed mythical creatures who have come to their lands as refugees.

Orlando also executive produces the series, adapted from a hit script that directors like Guillermo del Toro have previously taken an interest in. The actor admitted shooting Season 1 was challenging at times, thanks in part to a director who unexpectedly left the project and some executive turnover at Amazon and another of the production companies. But he’s proud of the project and the cast they’ve helped assemble, including model turned actress Cara Delevingne who plays Orlando’s winged partner in crime-solving. 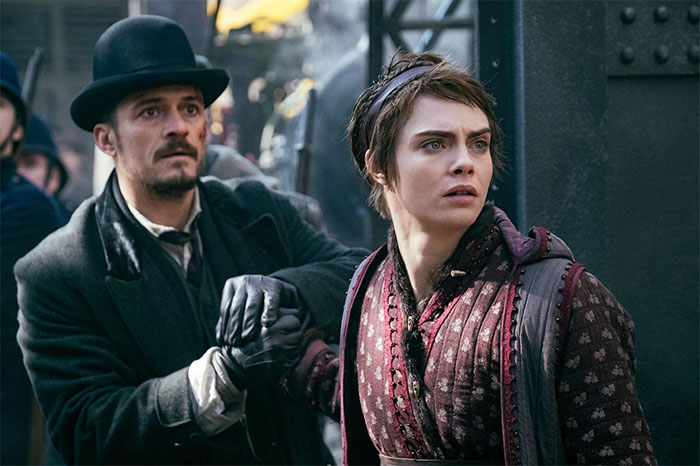 Considering their characters have romantic tension on the show, Howard was curious if he ever worried about developing any feelings for Cara on set. “You gotta just be professional, man,” Orlando told him. “I never shit where I eat. Even in drama school … I’m not saying I haven’t fallen in love, I just never shat where I eat.”

“I want to keep that chemistry for the camera,” he added.

Everyone seems to be responding well to their onscreen chemistry so far. Despite debuting just a few days ago Amazon has already renewed “Carnival Row” for a second season and Orlando came into the Stern Show with hints of a beard on Wednesday in part because filming is set to resume in just a few weeks.

Orlando, a practicing Buddhist, believes there’s far more to life than just the hits and misses of his career. He’s careful to balance his workload with his home life, especially these days considering he has both an 8-year-old son, Flynn Bloom, and is now engaged to Katy Perry.

His first well-publicized celebrity romance was with actress Kate Bosworth. The two dated in the mid-2000s and Orlando said she—along with Transcendental Meditation—helped guide him through a couple of the trickier stretches in his career.

“She was amazing,” he told Howard.

Orlando later found love with Victoria’s Secret “angel” Miranda Kerr, and the two were married from 2010 to 2013. While their romance ultimately didn’t pan out, Orlando said their relationship remains strong thanks in part to their love for and commitment to their son.

Orlando definitely wasn’t shy about discussing his love for his current fiancée, either. The two plan to marry next year and Bloom said children might not be too far down the road. “We are shooting for that,” he told Howard. “It’s like this wild mustang. If we can just wrangle this beast and get on it’ll, we’ll have the ride of our life.”

Howard heard they considered having their nuptials at Disneyland. Orlando debunked the rumor, though he admitted it’s something Katy might actually like. “That would be a very good option … she loves Disneyland more than anything else,” he said.

He said the two intend to keep many of their wedding details private, though he did reveal they’d already gotten to work on crafting their guest list. With a laugh, Howard told them not to worry about saving a spot for him as he’d be unlikely to attend any wedding if it meant traveling all the way out to California.

That’s all Orlando needed to hear before extending Howard an invitation. “So long as you agree not to come, I’ll send you an invite,” he joked.

Howard did suggest utilizing a celebrity officiant, saying Mark Consuelos did a great job for him and Beth when they wed in 2008.

That got the actor thinking. “Wait, you could marry us,” Orlando said. “I’m on the phone right after this—’Katy, Howard Stern is marrying us!’”