Panel reviews Brent and Katelyn’s dive into the lifestyle, from soft swinging to the Jackhammer

Stern Show staffer Brent Hatley and wife Katelyn spent the better part of 2019 exploring the swinging lifestyle and for Howard and co-host Robin Quivers, it was the storyline that stood out the most last year. “That was the biggest story of the year I think, don’t you?” Robin said to Howard and the staff panel assembled in the studio on Wednesday.

“Yeah, when I think about it I think about Shuli not believing Brent and then Brent proving that he was telling the truth,” Howard explained.

“Well, not on everything,” Shuli interjected. “A lot of stuff that went down, went down when none of us were there to validate or cover any of it … the stuff that we were sent on, didn’t necessarily end that way.” 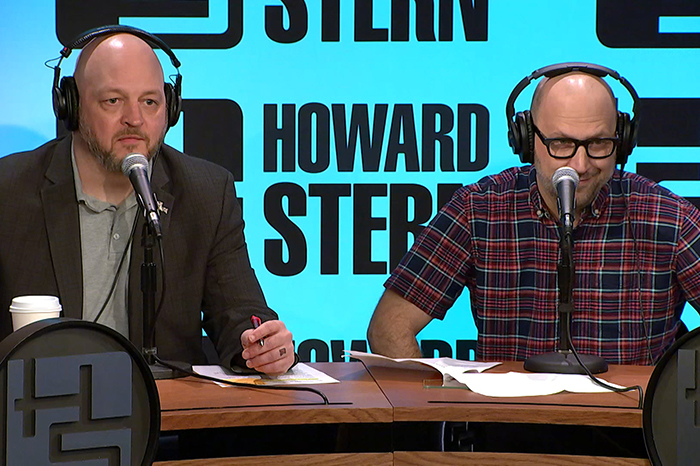 As Howard played audio recapping some Brent and Katelyn’s journey, concern for the staffer continued to come up. “You seemed a year ago to be a much happier person to be around in the office,” co-worker Jason Kaplan noted. “I don’t know, this doesn’t seem to have been a good year for you.”

Ronnie “the Limo Driver” Mund agreed with Jason’s assessment of their colleague. “He’s not here anymore, he’s not the same guy,” Ronnie mentioned. “He’s like a turtle now. It’s like his head goes into a shell when he walks around here. Bottom line, I think he’s in over his head with this whole thing.”

“Ronnie’s talking about him the way people talk about someone who went to a battle,” executive producer Gary Dell’Abate remarked.

“I feel like since that Jackhammer guy got in there, the cop, that they’re in your head,” Howard told Brent, referring to Katelyn’s week of swinging when the show was out in Los Angeles.

“They’re not,” Brent insisted. “That’s not the case at all.”

“We did learn a lot from Brent and Katelyn this year on swinging and that’s the bottom line,” Howard pointed out. “This show is where we learn.”

For Brent’s part, the staffer said he has zero regrets about his and Katelyn’s decision to move away from monogamy. “Life is an adventure, we’re figuring everything out,” he stated.