Plus, actor Michael Rapaport targets the Stern Show staffer with some angry voicemails

Howard and his staff panel spoke at length on Tuesday about this Sunday’s Super Bowl matchup between the Kansas City Chiefs and the San Francisco 49ers, but no one had more thoughts on the subject than Kansas native and lifelong Chiefs fan Richard Christy.

“Can I just say, go Chiefs! Let’s do this! Kansas City, we’ve been waiting 50 fucking years for this, man,” Richard told Howard.

“This has never happened in my fucking lifetime, and I’ve been a lifelong Chiefs fan, man. We’re doing this, Kansas City,” he continued before thanking everyone from superstar quarterback Patrick Mahomes and head coach Andy Reid to safety Tyrann “Honey Badger” Mathieu. “You guys are the fucking best. You made me so happy this year. This is gonna fucking rule.”

Despite the fact Richard celebrated hard after the Philadelphia Eagles won the Super Bowl in 2018, he insisted a Chiefs win would mean so much more to him. “My dad and I grew up watching the Chiefs together every Sunday. We bonded over Chiefs,” he told Howard, unsuccessfully fighting back the tears. “We could never afford to go to the Chiefs games, but we watched together at home.” 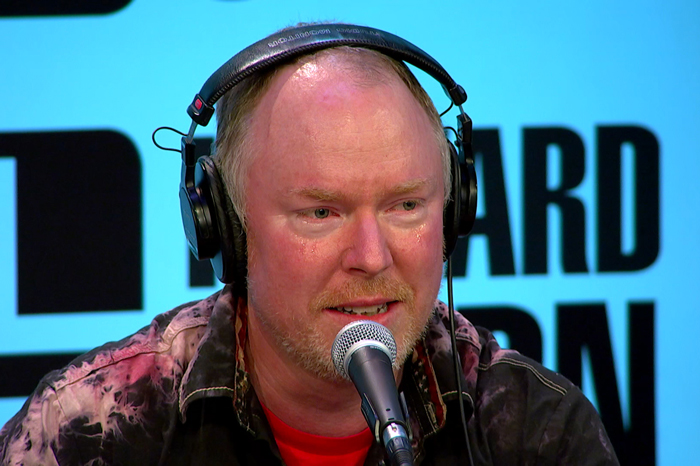 Considering most teams don’t even make it to the Super Bowl, Howard’s co-host Robin Quivers pointed out how fortunate Richard was to be in this situation. “This might never happen again,” she told him.

“You know what? With Mahomes it’s gonna fucking happen again!” Richard insisted. “He’s gonna win it, and he’s going to keep winning it. This is the start of something fucking great and me and my dad are gonna be here to see it for many years to come.”

“This is fucking so huge for me and every Chiefs fan out there. Fifty fucking years we’ve been waiting. This is amazing,” Richard continued, trying to catch his breath. “I can’t even describe the emotions I’m going through.”

Howard was curious what a phone call between Richard and Mr. Christy might sound like if the Chiefs emerged victorious, so the staffer acted it out for him. “I’m never going to wash away these tears. They’re tears of joy,” Richard told “Mr. Christy,” being played by Howard. “If we have another son it’s Patrick Christy all the way.”

Howard commended his staffer for showing his tender side, but executive producer Gary Dell’Abate wondered what Richard might do if his team were to lose on Sunday. “I’m gonna be bummed, but I know as long as Mahomes is coming back we’re gonna get there eventually,” Richard said.”

Regardless of whether the Chiefs win, this season has already been pretty good to Richard. He recently won $1,200 after beating actor and Stern Show celebrity superfan Michael Rapaport in the Emotional League Fantasy Football League finals.

“The sweetest victory is getting to beat Michael Rapaport in the championship. It was awesome,” he told Howard. “I kicked his ass, too.”

Rapaport has been known to trash talk Stern Show staffers in the past, so Howard wondered if Richard received similar treatment before or after their game. “I won’t give him my number,” Richard said, adding, “I don’t need that. I don’t need someone yelling at me on my personal time.”

“But you don’t get to trash talk him,” Robin noted.

“I don’t need trash talk. I beat his ass by 40 points in the championship,” Richard responded.

Considering this was the third straight year Rapaport lost in the finals, Gary even decided to get in on the ribbing. “I usually don’t like to mix it up with him but after Richard beat him … I couldn’t resist. I said, ‘Oh, the humanity. You lost again. You’re the Susan Lucci of this league,’” the executive producer recounted.

Since Rapaport didn’t have Richard’s number he left a despondent voicemail after the game for Richard’s colleague Sal Governale. “Fuck, Sal. I fucking lost, man. I fucking lost and now I got that big-toothed fucking ape baboon—fucking Booey—texting me and taunting me and harassing me. That fucking animal,” he said.

Adding insult to injury, the league had the wrong email on file for Rapaport which meant a delay in him receiving his second-place prize. The actor didn’t handle the news well. “Everybody else is getting paid throughout the year, but I can’t get my fucking money now? … What are you a fucking church? You can’t answer the phone, prick? What are you the Catholic church?” Rapaport said in another voicemail.