“Are our balls going to be black?” Richard wonders before testing the internet phenomenon

Male users of TikTok have been using the popular social networking service to see if it’s possible to taste soy sauce by dipping their testicles in the condiment, a theory Stern Show staffers Richard Christy and Sal Governale were both more than happy to test out. “Guys are making videos of themselves dipping their balls in soy sauce claiming they can taste the salt,” Howard elaborated on Tuesday ahead of the action.

With the assistance of executive producer Gary Dell’Abate, Richard and Sal agreed to be blindfolded and dip their genitalia in cups of water and soy sauce. “I wouldn’t get my dick in that soy sauce, just your balls,” Howard recommended.

“Are our balls going to be black?” a chuckling Richard asked, clad in nothing but a Kansas City Chiefs shirt. 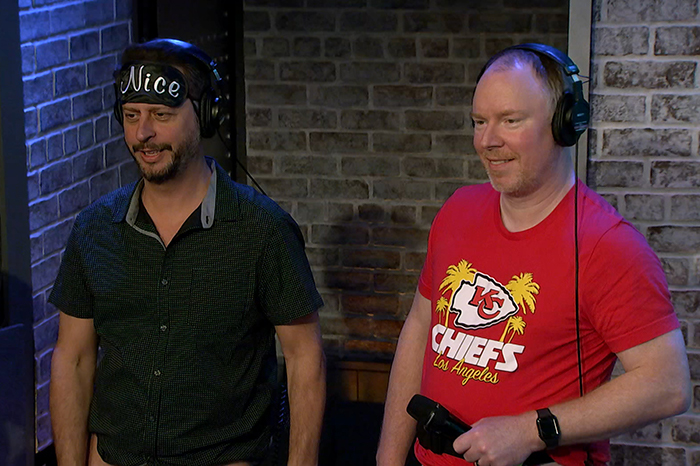 First up was Sal, who appeared confident in his deciphering. “Wow, you won’t believe this … I immediately got the taste of soy sauce,” the staffer proclaimed. “It went through my nostrils and on my taste buds.”

Despite already failing, Sal went ahead with the soy sauce portion of the test. “It’s so strong in the nose,” Sal reported. “Howard, I can taste absolutely nothing.”

As Richard stepped up to take the challenge, he squatted down in order to get his testes fully immersed in the mystery liquid. “I’m getting a little salty taste sensation, I think that’s the soy sauce,” Richard answered with certainty.

“Wow, Richard has taste buds in his balls,” Howard said upon learning his staffer guessed correct.

“Well, he has them in his ass,” co-host Robin Quivers reminded, referencing Richard’s methods of enjoying beer and champagne.

Willing to share his tasting secrets, Richard broke down his approach. “You’ve gotta leave them in there for a minute,” he explained. “I felt a weird like, not a taste, but like something soaking in my balls that tingled it a little.”

Watch the full video of Richard and Sal’s soy sauce challenge (above).