From his late-night Comedy Central series “Lights Out” to his recent slew of streaming successes, there’s little question David Spade has become one of the world’s most recognizable entertainers. During his return to the Stern Show on Tuesday, however, the legendary actor, comedian, and talk show host opened up about a more trying time in his career a few decades back when he was going on as many auditions as he could schedule. Needless to say, he still vividly recalls the time fellow Stern Show veteran Jim Carrey beat him out for a breakthrough television role.

“I lost a job to him for ‘In Living Color.’ I was up for that white guy part,” Spade told Howard on Tuesday. “I auditioned a bunch of times.”

Adding insult to injury, just auditioning multiple times for the “In Living Color” role had forced David to abandon a potentially lucrative (and relaxing) two-week stand-up gig in Hawaii.

“Did you know that you were up against Jim Carrey?” Howard asked him.

It wasn’t long before Spade’s career also skyrocketed. In 1990, the same year “In Living Color” premiered, David landed a writing gig on “Saturday Night Live.” The rest, as they say, is history. Looking back on it now, he realizes “In Living Color” hired the right man for the job.

“Usually I just go, ‘I’m so much fucking better than this guy,’” David laughed. “But when you see Jim Carrey you go, ‘Goddamned, did they make the right call,’” 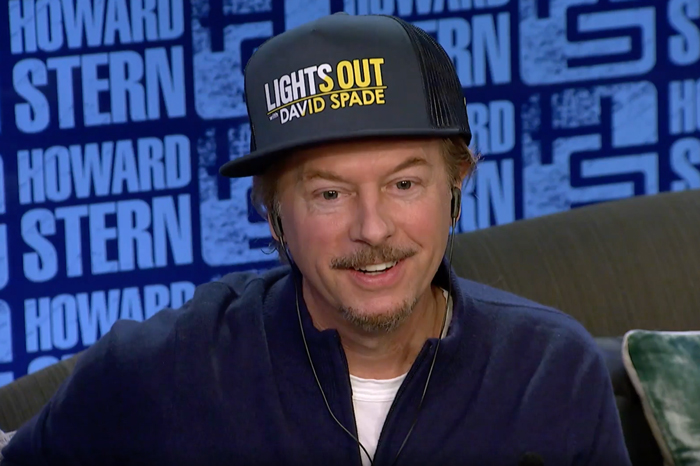 David became a household name, thanks not only to his many years on “SNL” but also several well-received stand-up specials, acting opposite Chris Farley in films like “Tommy Boy” and “Black Sheep,” and toplining long-running sitcoms like “Just Shoot Me” and “Rules of Engagement.” In recent years, Spade has also starred in a several Netflix comedies, including “Father of the Year,” “The Do-Over,” and the upcoming “The Wrong Missy,” which he recently finished filming.

Considering those projects are reportedly some of Netflix’s most popular original offerings, it’s unsurprising the digital streamer’s head honcho Ted Sarandos recently invited David to his house for an exclusive, comedians-only Grammys party.

“It was a sit-down dinner,” David said, explaining everyone was there to celebrate the Grammy nominations for Best Comedy Album earned by Stern Show veterans Ellen DeGeneres, Trevor Noah, Aziz Ansari, and Dave Chappelle, who had each released recent Netflix specials.

David sat with Jimmy Kimmel and his wife Molly McNearney at the dinner and he told Howard there were about 20 comedians total in attendance, including Tiffany Haddish, Aly Wong, Patton Oswalt, Bill Burr, Kevin Hart, Bill Hader, Arsenio Hall, and even Eddie Murphy. David revealed he and Eddie got a chance to catch up with each other. “It was all just conversation about ‘SNL’ and nice stuff. He was very cool,” Spade recounted.

“So, the party is fun for you or is it like work?” Howard wondered.

“It was just pure fun because it was easy and everyone is just laughing and cracking up,” David told him.

David told Howard he was invited to several Oscar shindigs earlier this month, too, including the annual Vanity Fair party as well as an after-party at director Guy Oseary’s house. “I went to two,” he told Howard. “It’s stupid. I have no business being there, but it is fun to go.”

He revealed the Vanity Fair hosts invite different tiers of celebrities to join the gathering at different times on Oscar night, with A-listers generally arriving earlier in the evening. This year, David’s invitation was for 10 p.m.

“The 10 p.m. invite was the number one invite? Is that when the party starts?” Howard asked.

“I’m sure there’s better,” David said, explaining he ran into comedian Sarah Silverman and she lamented the fact her 8 p.m. Vanity Fair party invite meant she needed to head there before the Oscars had even ended. “I go, ‘Just come later,’ and she goes, ‘You can’t. You have to go when they tell you,’” he recalled.

Sarah apparently wasn’t exaggerating, either, as David recalled showing up to the Vanity Fair party at 9:40—just 20 minutes before his invite time—and the lady at the door still wouldn’t let him in early.

“This is the most embarrassing thing I’ve ever heard,” Howard laughed.

David shared another awkward and ultimately agonizing mix-up for Howard on Tuesday which occurred after he scheduled an in-room massage at a fancy hotel. Though he’d asked the front desk for a female masseuse, he suspected he was getting more than he bargained for after being startled by a surprisingly powerful knock on his door.

“I look through the peephole and there’s this huge Russian Dolph Lundgren guy,” David told Howard. “I said … ‘What’s going on? Are you looking for the gym or the steroid room?’

After being informed he’d be stuck with the bill either way, David gave the massive male masseur a shot. That wound up being a painful mistake, though. “He puts me on the table like a fucking rag doll,” David said, explaining he felt discomfort right away but was afraid to speak up even though the massage was “obviously, like, 300-times too hard.”

David finally worked up the courage to voice his anguish but the masseur didn’t want to hear it. “He fucking shushed me, and I was so stunned,” David said, adding, “I shut the fuck up for an hour while he beat the shit out of me.”

Perhaps unsurprisingly, given the quality of his massages, David told Howard he sometimes suffers from back and neck pain. He sought out marijuana to help with the pain, but things again didn’t go as planned after he ignored a recommendation from Kimmel on where to purchase the weed and instead tried his luck at a less-crowded spot in a seedy part of Hollywood.

“It was so terrifying. There are like a line of these psychos out the door, onto the street, and it’s in a sketchy part of Hollywood… It’s like ‘World War Z.’ They’re walking up the walls. Everyone’s all fucked up, for starters. I don’t know what they’re on—gacked up on gook,” David said.

The proprietor gave David the celebrity treatment and tried sending him home with a variety of offerings, like gummy bear edibles, but the multitude of options proved overwhelming. “I get scared,” David concluded. “I just want this little pen—take a few puffs like a puss and try to zonk out.”

“Lights Out with David Spade” airs Monday through Thursday at 11:35 p.m. ET on Comedy Central.