Sofia Vergara has been scoring laughs on ABC’s “Modern Family” for the better part of a decade and should make bank at the box office this month alongside Reese Witherspoon in “Hot Pursuit,” a comedy about a crooked cop and a drug dealer’s widow.

But her “Modern Family” and “Hot Pursuit” roles are just the tip of Sofia’s acting iceberg. The accomplished Colombian thespian has actually starred in a TON of great things (and, no, we aren’t even talking about our sexy nighttime dreams!)

Here are seven of Sofia’s hottest and most hilarious roles to date — check them out ASAP:

Sofia first piqued our interest in 2004 when she played a sex-crazed flight attendant in “Soul Plane,” a.k.a. Kevin Hart, Tom Arnold, and Snoop Dogg’s urban take on “Airplane!” The film crashed and burned with critics, but Sofia’s character was a bright spot. Her – ahem – climactic moment came in the cockpit (insert your own joke here) when she helped land the plane by mounting the controls in the most salacious way possible, spreading her legs, and pretending to have sex. 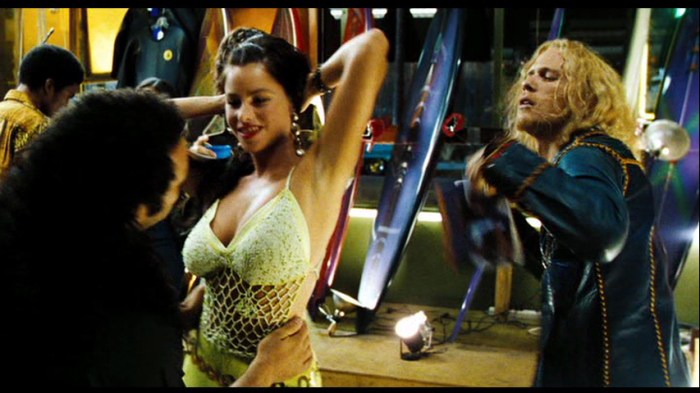 Sofia played the crime boss’s scantily clad girlfriend in “Lords of Dogtown” (2005), Catherine Hardwicke’s look at the rise of skateboarding in Venice Beach in the 1970s. But her character Amelia was a bit of a cougar, too, flirting with young stars Emile Hirsch, Heath Ledger and John Robinson. Sounds like every young dude’s dream, right? Sofia’s part in the critically acclaimed film isn’t HUGE, but it is memorable. Plus, she reportedly bonded with Heath on set and he eventually inspired her to get a tattoo.

John Singleton’s “Four Brothers” (2005) has enough action and violence to make a Navy Seal cry, but Sofia, who co-stars as Tyrese Gibson’s Latin love interest, is the revenge flick’s much-needed comic relief. While Tyrese and his brothers (played by Mark Wahlberg, Garret Hedlund and Andre Benjamin) are avenging their mother’s murder by cracking a bunch of skulls, Sofia’s character is cracking funny bones with her crazy hot (and crazy crazy) antics. Some of the best bits of the movie are when the brothers rag on her over-the-top accent and insane behavior, much to Tyrese’s chagrin.

Sofia made a memorable cameo as a fruit-slinging village girl on a Season 4 episode of HBO’s long-running rich-bros comedy “Entourage.” Vinny Chase (Adrian Grenier) and his crew discover her during the filming of his Pablo Escobar biopic “Medellin.” The faux flop’s director Billy thinks Sofia is so damned hot that he gives her a major role in the film, which is a bust and nearly destroys Vinny’s career.

5. Esperanza Villalobos on “The Knights of Prosperity”

Unbeknownst to many Sofia fans, she was actually the lead on an ABC sitcom well before her “Modern Family” days. The short-lived 2007 series was called “The Knights of Prosperity” and it centered around a group of misfits hell-bent on robbing rock star Mick Jagger. No, seriously, that was the show’s entire premise. Sofia shined as the hot and heavily accented Esperanza Villalobos, but not enough people tuned in and ABC pulled the plug on the series – co-created by David Letterman – after only 13 episodes.

Robert Rodriguez didn’t snag any Oscars for his outrageous 2013 “Machete” follow-up – “Machete Kills” — but the director’s tongue-in-cheek action-comedy was one helluva ride. Sofia played Machete’s delightfully deadly mother, Madam Desdemona. Equipped with guns on her grapefruits and a codpiece cannon big enough to put Jon Hamm’s to shame, she was a super-fine force to be reckoned with. Even better, she runs a brothel filled with hooker assassins, which is pretty much the most badass thing ever. Wait, why didn’t this thing win any Oscars?

7. The overprotective mom in “Chef”

Sofia plays it straight in “Chef,” Jon Favreau’s 2014 cooking comedy-drama. He wrote, directed, and starred in the surprisingly sweet film about a talented chef who gets into the food truck business after enduring a midlife meltdown. Sofia co-stars as Inez, his overprotective ex-wife and baby mama. She reluctantly allows their young son to take a job on the food truck and partake in a heartwarming culinary adventure. It’s one of Sofia’s more subdued roles, but also some of her best acting to date.​​