From “The Matrix” to “Gotham” and everything in between 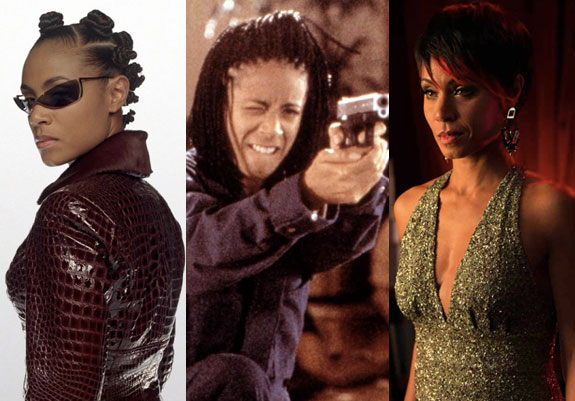 Jada Pinkett Smith in “The Matrix Reloaded,” “Set It Off,” and “Gotham” Photo: Warner Bros.

Hollywood has given birth to dozens of fierce female characters since Sigourney Weaver paved the way in 1979 by whooping that first alien’s butt. These days, every A-list actress from Scarlett Johansson (“Lucy,” “The Avengers”) to Jennifer Lawrence (“The Hunger Games”) kicks ass and takes names onscreen.

But which actress secretly has the most rugged, rough-and-tumble resume in the biz? None other than our girl Jada Pinkett Smith. The Baltimore-born badass has portrayed a plethora of powerful women throughout her decades-long career, including a hovercraft-piloting robot huntress (left), a bank robber (center), and a comic villain (right).

In honor of her appearance on the Howard Stern Show this week, we’ve done you the favor of putting together a list of her nine most badass roles: 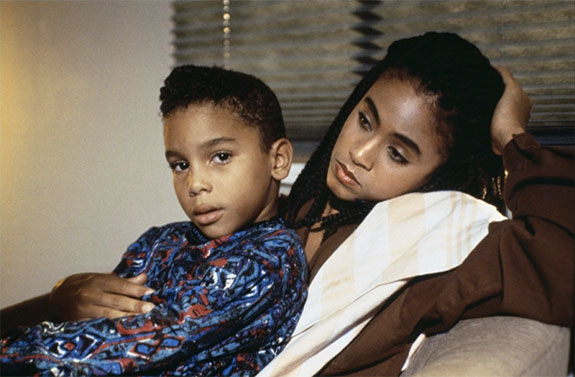 Jada played one of the toughest cookies you can imagine in her first movie ever, the Hughes Brothers’ critically acclaimed urban drama “Menace II Society.” Her character Ronnie was a single mother struggling to raise her son in a violent, impoverished neighborhood. And, really, what’s more badass than that? It was an acclaimed debut for Jada and the film went on to win the big prize at that year’s MTV Movie Awards, beating out a few others you may remember, like “Jurassic Park” and “Schindler’s List.”

The most cray cray character Jada has ever played might be Peaches, the feisty, foul-mouthed love interest in “A Low Down Dirty Shame.” When She’s not saving Shame’s (Keenan-Ivory Wayans) ass, she’s putting the hurt on anyone who gets in her way. At one point Peaches cold cocks a pretty boy soap star, knocking him from the sidewalk clear onto a restaurant patio. The best part is all the trash-talking she does while he’s still trying to stand back up. (“If you think you’re gonna sleep with a sister, I got something else for you. I. Will. Come. Back. For. You.”) Later on, she squares off against the female villain in what might be the prettiest catfight ever put to screen. Needless to say, Peaches creams the other lady. 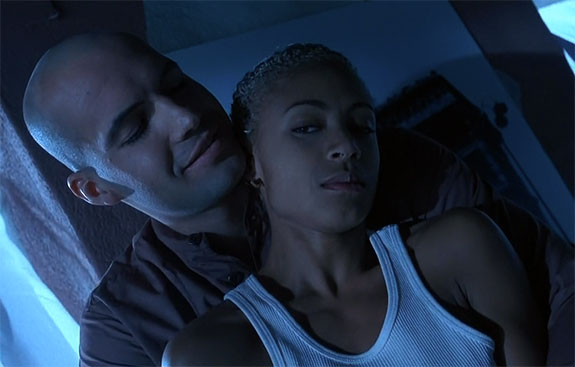 Two movies were spun-off from HBO’s comedic horror series “Tales From the Crypt”: “Demon Knight” and “Bordello of Blood.” The latter is memorable because Dennis Miller played a P.I. who battles hooker vampires, but “Demon Knight” is the far superior film… and that’s thanks to two amazing performances from Jada and “Titanic” baddy Billy Zane.

Jada stars in “Demon Knight” as Jeryline – a convict who accidentally becomes a pawn in the ultimate battle between good and evil. She eventually faces off against Hell’s scariest minions – led by the hilariously wicked Billy Zane. Her only weapons are her wits and… wait for it, wait for it… the diluted blood of Jesus, gathered during his crucifixion. Amazing. Better yet, her badass character defeats Zane (SPOILER ALERT) by kissing him with a mouthful of Jesus-blood. Yeah, you read that right. “Demon Knight” is a weird, wild movie and Jada is believably awesome throughout.

In her next film, “Set It Off,” Jada robbed banks alongside rap legend Queen Latifah and acclaimed actress Vivica A. Fox. How cool is that???

F. Gary Gray (“Straight Outta Compton”) directed the crime flick about a group of fierce inner-city females who are so fed up with truth, justice, and the American way that they decide to go on a crime spree. The cops are hot on their trail, however, and Jada eventually finds herself in the middle of a ton of gritty action scenes and intense shootouts. “Sugar & Spice” this is not.

Jada’s character Stony Newsom eventually flees to Mexico by herself and is the only one of the women to make it out alive.

Unfortunately, Jada did NOT make it out alive in this one. She didn’t even make it through 10 minutes! But we’re throwing her character Maureen on this list anyway, because she put up one hell of a fight against the masked killer. He stabbed her four consecutive times before finally taking her down and, even then, she managed to unleash a blood-curdling scream before dropping dead. That’s pretty much all you can ask of a victim in a slasher film, right?

Watch the crazy sequence (above).

Jada’ best bits of onscreen badassery might have come in the Wachowski siblings two blockbuster “Matrix” sequels, “The Matrix Reloaded” and “The Matrix Revolutions.” She played Niobe, a tough-as-nails hovercraft pilot and martial arts expert. Her hobbies included, killing robots, killing more robots, making out with Morpheus (Laurence Fishburne), killing even more robots, and saving the ever-loving sh*t out of humanity. Not only was Niobe one of Zion’s best hovercraft pilots (watch her fly one in the clip above), but she is also one of the only people not named Keanu to take on an agent and win. Jada kicked so much butt that she was nominated for the NAACP’s Image Award.

Jada’s badassery, as it turns out, isn’t limited to the big screen. She plays villain Fish Mooney on the freshman season of “Gotham,” Fox’s breakout Batman-inspired police procedural. She was a cruel but calculating criminal mastermind who put the hurt on good guys (Ben McKenzie as Det. Gordon) and bad guys (Robin Lord Taylor as the Penguin) alike. Unfortunately, Penguin pushed Fish Mooney off a roof on the May finale and Jada’s character is currently presumed dead. Womp, womp. 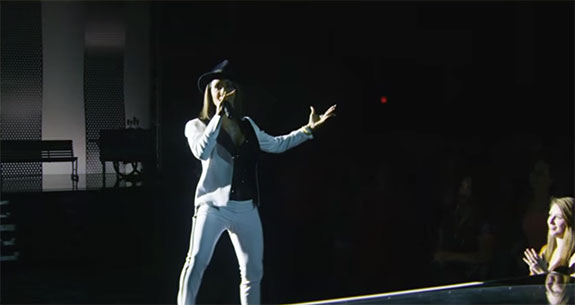 Jada has stepped in for Matthew McConaughey in “Magic Mike XXL,” the hotly anticipated stripper-bros sequel that will hit theaters HARD on July 1. It’s unclear what that entails, exactly, but judging from the trailers it going to get pretty hardcore. McConaughey took it off in the first movie – will Jada put on a similar performance in this one? Better yet, will she have to lay the smack down on Joe Manganiello and Channing Tatum when they get out of line? We sure hope so.

Watch her in the official trailer (below).

Last but certainly not least is Jada’s most impressive role as well as one she plays every single day — Jada Pinkett Smith. In addition to raising children and being an awesome wife, she is one hell of a philanthropist. She co-founded the Will and Jada Smith Family Foundation with her husband, which benefits inner-city kids and development. She also once donated $1 million to her old Baltimore performing arts school (that Tupac attended!) The actress-producer is a vital to variety of other great causes, too, including charities aimed at curbing human trafficking, raising AIDS awareness, and delivering healthy meals to patients suffering from heartbreaking illnesses.