Sir Patrick Stewart Might Be The Funniest Knight Alive 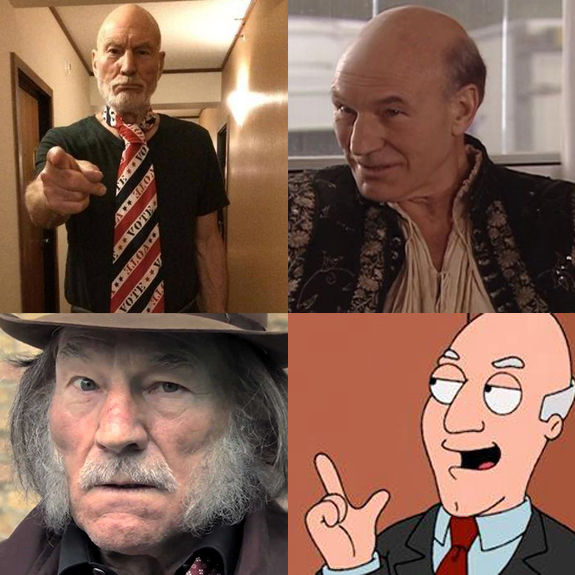 Off-color comedy is not something you associate with the Most Excellent Order of the British Empire – fancy talk for how the Queen recognizes significant civilian contributions to England by honoring them with a knighthood (or damehood) – but your opinion is about to change.

Sir Patrick Stewart, knighted at Buckingham Palace in 2010, is best known for his stoic portrayals of powerfully authoritative characters like Captain Picard from “Star Trek: The Next Generation” and Professor X from the “X-Men” mega-franchise series. He’s also one of the most prolific Shakespearean stage performers alive today which include performances in “Two Gentlemen of Verona,” “Anthony and Cleopatra” and “The Merchant of Venice,” just to name a few of the many plays he’s perfected at the world-famous Royal Shakespeare Company.

Sir Patrick’s newest series, a dark comedy called “Blunt Talk,” places him in a role most of us are not comfortable seeing him in – a perversely curious, coke-sniffing newsman with an appetite for the naughty. And quite frankly, that’s how the 75-year-old English thespian prefers it.

If you think this is his first dip into the comedy pool, you’d be gravely mistaken. We’ve compiled a list of some of the Knight Bachelor’s most memorable comedic roles throughout the past few decades to prove that Stewart has been working blue for years.

The HBO original series, created by Ricky Gervais, perfectly poked fun at the very core of how things are done in Hollywood – or London in this case. The series followed the life of a struggling actor, played by Gervais, as he clawed his way to the top of the entertainment industry. Each episode showcased an A-lister who was willing to mock their public persona. Ben Stiller, Kate Winslet, Daniel Radcliffe and even David Bowie popped up to point out the ridiculousness of show business. However, without question Stewart’s guest appearance was funnier – and creepier – than all that came before him.

One day we’ll all tell our kids about the wild, wild west days of the Internet. We’ll knowingly lean back in a creaky hover chair with an electronic pipe in our hand and talk about the days when well-known celebrities continually agreed to take part in half-baked, low-budget concepts that undeservedly wove their way into the pop culture fabric of our lives. Luckily, not all of these stand-alone sketches are strikeouts. Especially when Patrick Stewart steps up to the proverbial actor’s batter’s box. As this skit proves, it just takes glorious fake mutton chops, a “Game of Thrones” cameo and murdering Ryan Lochte to be a grand slam.

Based purely off their assumed polar-opposite sensibilities, it might come as a surprise to find out that Seth MacFarlane and Sir Patrick Stewart have collaborated almost as much as Bill Murray and Wes Anderson. Almost. The classically trained actor from Yorkshire, England has been in fourteen different episodes of MacFarlane’s “Family Guy,” playing a multitude of characters from Baby Susie Swanson to Peter Griffin with the vocal chords of Patrick Stewart and, of course, playing a perverted version of himself, Sir Patrick Stewart OBE.

Since we’re on the topic of adult animation, we might as well point out Sir Patty’s role in “Family Guy” spin-off, “American Dad.” Seth, besides being the executive producer of Stewart’s new live action comedy series, also hired Stewart for the reoccurring role of CIA Deputy Detective Avery Bullock, which has been a staple of the primetime cartoon since its inception. Once again Stewart puts his comedic wild side on display as he portrays a loose, eclectically odd version of the man we all fantasize to be in real life. Yes, we ALL fantasize about Patrick Stewart so no point in lying about it.

“Men In Tights” will not go down in history as one of Mel Brooks finer comedies. No, those honors will be saved for movies like “Space Balls,” “Young Frankenstein” and “Blazing Saddles.” But the Robin Hood parody on its own is still ripe with classic Brooks-esque chutzpah and sight gags. One of the finer decisions Mel made – besides casting a young Dave Chappelle in his first professional role – was casting future knighted scholar Sir Patrick Stewart as King Richard, who wastes no time stealing an open-mouth kiss from Robin’s future bride.

So technically, this is not a comedy nor was Patrick Stewart trying to be funny but this little web gem is found gold. In the 1976 TV mini-series “I, Claudius,” Sir Patrick plays Sejanus, a twisted Roman Captain who plots murder to usurp the current monarchy in hopes of world domination. In this scene he’s watching one of his victims die as he comforts the man’s wife. In the end, Sejanus and all his kids are unceremoniously killed but what is really important is this scene right here. Oh, and he’s wearing a sweet permed wig.