The Kocktails With Khloe host holds nothing back to Howard Wednesday morning.

Fashion and fitness icon Khloe Kardashian stopped by the Stern Show Wednesday morning to chat with Howard and promote her new FYI talk show, “Kocktails with Khloe.” Given the year Khloe and her family have experienced, there was obviously much to discuss.

Few marriages have been as eventful in such a short time as Khloe’s with estranged husband and former NBA player Lamar Odom. Howard asked Khloe about the initial discovery that Lamar had been cheating on her. Khloe says she never speculated that Lamar would be cheating, but certain elements, in addition to his 2013 DUI, let Khloe know that something was up.

“Nothing was on his cell phones, [but] he had an assistant. They were all on his assistant’s phone, so he was really crafty,” she explained.

From there, further details came to light, according to Khloe. “All these rumors kept coming out in the weeklies, and as much as I know they’re bullshit, where there’s smoke there’s fire. Something has to be right here,” she thought at the time.

“This one girl did this interview and she was so adamant, and when I confronted [Lamar], he blamed another teammate. He was like ‘oh that’s another teammate’s girl, blah blah blah…’ This was when he was playing for the Clippers his last season.”

According to Khloe, the cheating was all the more puzzling not just because their own sex life was great, but she simply had no idea when he found the time. “It’s another job,” she mused.

Being in the public eye certainly didn’t help. “It is humiliating on any level, but I found out he was cheating on me the majority of our marriage, I just didn’t know.”

But Khloe still doesn’t question why did he get married in the first place. “I know he loves me; I know we love each other. I know all of that — I don’t question those feelings.” And despite rumors, Khloe’s said she was not sure if she believes there’s a sex addiction.

On Her and Lamar’s Rapid Romance 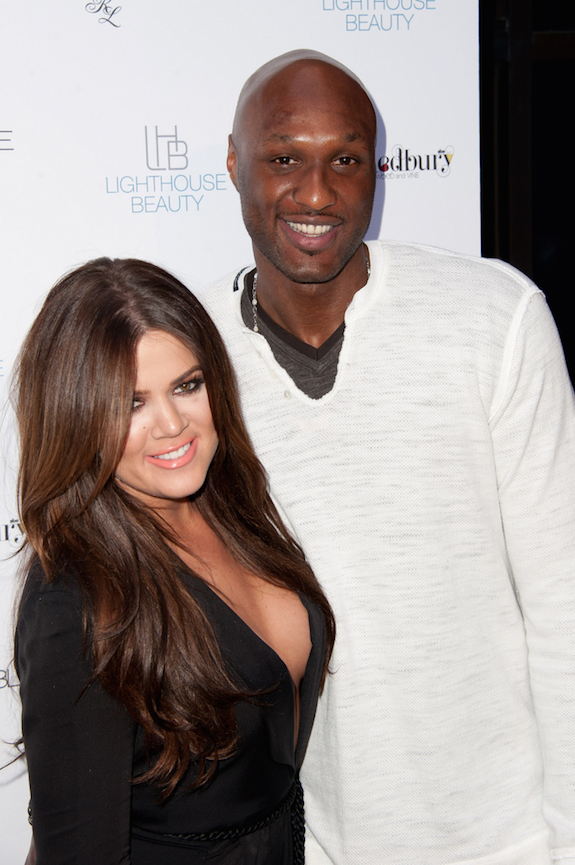 Howard wondered if it was a mistake to marry someone after only a month of knowing them, as Khloe and Lamar did.

Evidently, the family matriarch, Kris Jenner, as well as Khloe’s sisters all voiced their uncertainty about her hasty marriage. “All of them were like ‘you’re fucking nuts.’ It was nine days after meeting him we were like ‘we’re going to get married,'” Khloe recounted.

“It was just the most intense relationship I’ve ever had in a great way, but looking back in hindsight, would I say ‘oh, yeah probably should you have waited a little bit?’ Sure. But also, I don’t regret doing it,” she concluded.

In October 2015, after being discovered unconscious from an overdose at the Love Ranch brothel, Lamar was hospitalized and in a coma on life support for a few trying days. During that time, Khloe had to confront a hailstorm of issues with her husband.

First, she wondered why he was even at a brothel. “I’ve asked him that,” Kardashian told Howard. “I said, ‘listen, you do whatever the fuck you want to do but please promise me you’ll never go back to a disgusting brothel again. And if you want to pay someone, you could pay someone in the privacy of your hotel! What are you doing?'” she remembered asking him.

Lamar allegedly told her that he doesn’t know what he was thinking and that his brothel days are behind him.

Despite their struggles, Khloe has attempted to keep Lamar protected in a relative bubble during his healing process. “One day I came in and he was Googling ‘Lamar Odom overdose.’ I randomly walked into the room as he did this, and I was watching and he saw like surveillance footage or whatever online. So I grabbed the iPad and I was like ‘what the fuck are you doing? I’ve been trying to protect you, I don’t want this to hurt you!’ I have to remember – he has no idea what people know,” Khloe told Howard.

She doesn’t believe the herbal Viagra was the primary cause of Lamar’s overdose, despite the media’s insistence. Howard asked Khloe why he was even taking it, to which she responded, “I think when you’re doing so many other things, you’re a little limp down there …”

Khloe told Howard that Lamar is finally recovering, crediting his athleticism with saving his life. “The doctor thought he was a goner, too.” Fortunately, Khloe said she thinks Lamar is at about 70 percent right now.

Despite remaining close to Odom during his recovery, Khloe was cagey about indiciating whether the world would ever see them together again romantically. “Never say never but … he has so much that he has to prove himself, first,” she offered. For now, Khloe confirmed that she’s dating James Harden of the Houston Rockets.

On Fitness … And A Future Boob Job?

Later in the interview Howard asked Khloe about her dedication to fitness and prior body issues. “I had a major awkward phase for a very long time,” admitted Khloe.

“I’ve always had an incredible amount of confidence,” she explained though. “When everyone said I was the ‘fat Kardashian sister,’ I never thought that. Looking back now, I see how healthy I was, but I still wouldn’t say that’s a fat girl, I would say she’s a little overweight, she could maybe use the gym or cut back on a donut.”

After moving to Dallas with Odom, Khloe began a strict workout regimen. With Lamar traveling for games and all of her family in California, Khloe often found that she had some extra time on her hands. “That’s what I would do if I was bored — I would literally watch TV and do cardio,” she described of her schedule.

“I really appreciate the hard work it takes to have a good body. Sometimes when things are given to you, you don’t appreciate it and it’s fucking hard work!”

There is one thing Khloe would like to change about her body though. “I do want a boob job … what girl doesn’t want fucking cleavage?” she quipped. Howard balked at that idea, insisting her breasts are great as-is. However, Khloe maintained that “she could always remove them.”

On Being At the Forefront of Caitlyn Jenner’s Transition 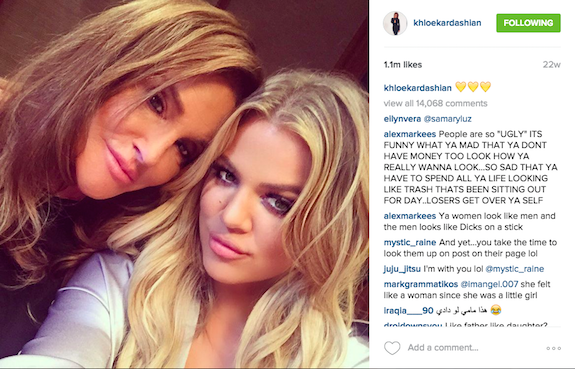 In 2015, Caitlyn Jenner dominated headlines across the nation, but few were on the front lines for her transition like her daughter. Khloe told Howard how the entire saga unfolded among the Kardashians.

“All these tabloids are coming out … we’re like ‘we could ask the source. You’re our dad, we’ll ask you.’ Bruce would consistently tell them the rumors weren’t true, which led to the family feeling betrayed when the news finally broke.

So how did Khloe and her sisters actually find out? “Something happened where we were at a meeting with E! for something and they mentioned that Bruce was having a TV show about transitioning or something. That’s the first we heard of it,” she told Howard.

“When things started going,” Khloe remembered, “he would only want to talk to us on camera … and I think it was also for security. Maybe he felt like we couldn’t get as upset or whatever.”

Obviously, Khloe was justifiably upset: “We felt so like ‘what the fuck? We’ve been asking you and why do business people know?’ I never want someone to feel like they have one-up on our family. We are a family. We’ve never turned our backs on each other yet with all the clusterfucks of shit that’s happened in our lives, why would we now?”

Howard pointed out how many expected gushing public support from Caitlyn’s daughters, but given how the whole thing was handled, Khloe and her sister’s honesty at the outset made sense.

“I don’t give a fuck what you want to do – just stop lying to us about things,” she vented. “Also it’s like, each sister had a different story because he couldn’t keep up. Just lay it on the table, what are we doing? What’s happening? Even then he didn’t tell us … we didn’t know when he was going to start fully dressing as Caitlyn.”

Tune into “Kocktails With Khloe,” premiering January 20th on FYI.