Ex-"SNL" writer opens up about almost writing for "Seinfeld," being sued by the King of Pop, and breaking an unexpected penis record 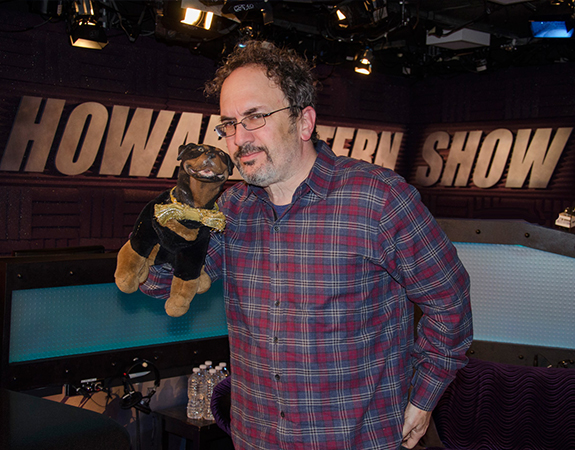 First, Robert and his puppet, Triumph the Insult Comic Dog, ruthlessly worked their way around the room, making fun of everyone within reach. After that, the acclaimed writer and comedian took the puppet off and opened up to Howard about his his early days writing for “Saturday Night Live,” Conan O’Brien, and more.

Robert told Howard that in the early days, he attended college in hopes of becoming a dentist like his father. He said he “sucked at science,” however, so it wasn’t long before he changed his focus and transferred from Cornell to NYU, which led to performing stand-up. The comedian recounted entering a few comedy contests in college, figuring since no one knew him he didn’t have much to lose. When he won, Robert explained to Howard, “it changed everything.”

The winning bit consisted of him dressing like an orthodox Jew while slowly turning the pages of a newspaper and licking his fingers between each painfully slow page flip. He said it was very Andy Kaufman-esque.

Before long, Robert moved to Chicago for a program with the famed Second City comedy troupe, ultimately putting him in front of the right people to get hired as a writer for “SNL.”

Conan and the Original Triumph Puppet

Robert would go on to become the head writer for “Late Night With Conan O’Brien,” telling Howard he focused on bringing something unique to the show. “I had all these rules, I didn’t want anything to resemble [David] Letterman,” he explained.

After experimenting with some puppet-driven comedy, Triumph the Insult Comic Dog emerged as an instant hit with Conan fans. It was a long time coming for Robert, though, who had perfected Triumph’s voice almost 30 years earlier, when he was still a kid. 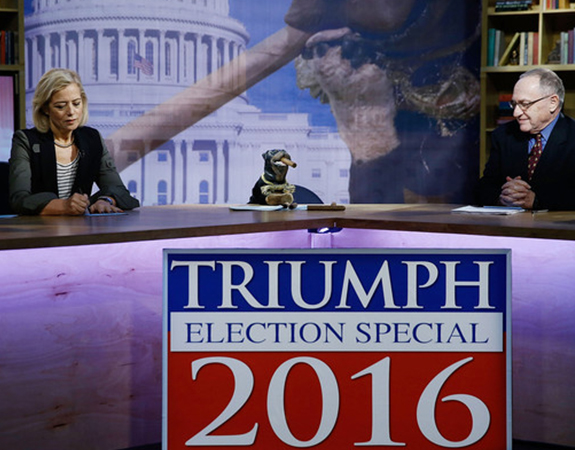 The Early Years of ‘SNL’

The funny man also recounted his early days as an “SNL” writer after being discovered by Al Franken.

“My first year I had a lot of problems,” he recounted to Howard, explaining that he was primarily writing “short film” types of sketches that Lorne Michaels wasn’t so keen on at the time.

“I almost got fired,” he even admitted to Howard. The 1985 season, which also featured the likes of Robert Downey, Jr. Dennis Miller, and Jon Lovitz, is infamous for being troublesome for a lot of the cast members and writers, but luckily Robert was able to stay the course and carve out a spot at the prestigious writer’s table.

One of the writer’s achievements during “SNL” was created one of its most famous animated shorts, “The Ambiguously Gay Duo,” voiced originally by Steve Carell and Stephen Colbert. Howard told Robert he thought it was the best animated cartoon to ever air on “SNL.”

The adult-themed cartoon actually debuted on “The Dana Carvey Show” before Robert brought it over to “Saturday Night Live.” At one point Jim Carrey was slated to star in a big screen version of the bit, but apparently Jim’s management put the kibosh on the whole thing. “The Ambiguously Gay Duo” may live on in other ways, however, as Robert told Howard that a Broadway musical is still a possibility.

A Series of Michael Jackson Cartoons

While “The Ambiguously Gay Duo” might be was one of Robert’s best known bits, tt was a completely different adult-themed cartoon that got the Emmy-winning writer in hot water with the heads of NBC.

“It was one of my first ideas on ‘SNL.’ I just thought, ‘Oh, Michael Jackson as a Hanna-Barbera cartoon,'” Robert told Howard. He went on to say that he wrote a few funny animated short films where Michael Jackson was relegated to being “an adorable pedophile” who found interesting ways to get near children. and described the cartoon to Howard as “Yogi Bear” for perverts.

It wasn’t long before NBC received a cease and desist letter from the King of Pop’s lawyers, causing “SNL” to press pause on the sketches until Jackson found himself on trial four years later. The new real-life drama spawned another cartoon in the series that showed a smitten Jackson floating towards the scent of a young boy who was placed on a window sill.

“Is it terrible that I’m telling these premises of a man who’s dead?” Robertl asked Howard, later admitting that “it’s harder to laugh at this stuff” because he’s a parent now.

The ‘Hans and Franz’ Movie That Could Have Been 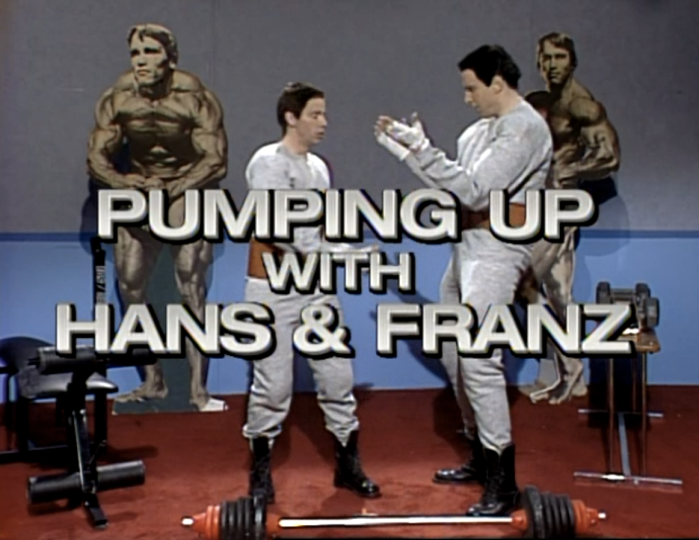 The best film Robert thinks he ever wrote was the “Hans and Franz” movie that was never made. The writer admitted it was a bit heartbreaking that the script, which was written like a musical, never got a fair shake. Amazingly, Robert said the movie had Arnold Schwarzenegger attached, though the future ex-governor had to back out of the project because of some box office bust.

A Single Season of “The Dana Carvey Show”

Even though Robert landed in front of the camera on a few bits he wrote, like the famous “Da Bears” sketch, he said he never really longed for the attention. “Honestly, I had so much fun doing Triumph and the lips of those [“Conan”] cut outs, that I didn’t think about it,” he told the King of All Media.

Dana Carvey did offer Robert a chance to be in front of the camera on the first season of “The Dana Carvey Show,” but the series was short-lived. To this day, Robert thinks the primetime sketch show tanked because its lead-in was “Home Improvement.” While the Tim Allen series was a number one show at the time, Robert thinks the family friendly fare was too great a contrast to an edgier “Dana Carvey Show” littered with envelope-pushing writers like Louis C.K., Stephen Colbert, Steve Carell, Bob Odenkirk, and Charlie Kaufman.

What’s the Deal With Writing for Seinfeld?

It was yet another “SNL” sketch that lead to Robert being offered a job on “the only sitcom [he] ever would’ve wanted to write for,” “Seinfeld.”

When Jerry Seinfeld hosted “Saturday Night Live,” he brought along former “SNL” writer and “Seinfeld” co-creator Larry David. Robert wrote a sketch called “Stand Up and Win,” which featured three Seinfeld-like contestants answer rhetorical questions like, “I know, who are these people?”

The bit went over great, Robert told Howard, and Larry ended up offering him a job. Unfortunately, due to health issues surround his father, Robert had to pass.

Howard also brought up one of his favorite bits that Robert Smigel ever wrote, which starred Matthew Broderick, Dana Carvey, and Jon Lovitz at a nude beach.

“I wrote it with Conan and Greg Daniels, but yeah, it was my idea,” Robert told Howard.

The bit, Robert explained, was inspired by a real trip he took with his wife to the Bahamas, during which he found himself talking with a very well endowed nude man. The four-minute sketch included the word “penis” over one hundred times and wound up being written about in The New York Times.