From “Twin Tower” sales to a mini-muffin special

A Texas mattress store is receiving a whole lot of backlash for a commercial advertising the company’s “Twin Tower” sale. The spot (above) includes two stacks of mattresses that come crashing down as the store manager, Cherise Bonanno, looks on and screams. She then turns to the camera and remarks, “We’ll never forget.”

After receiving hundreds of outraged comments, Miracle Mattress removed the video from their Facebook page. On Thursday, the company posted the following apology:

Unfortunately, this isn’t the first time a business has turned the anniversary of the Sept. 11 attacks into a commercial campaign. Check out these other sales and specials that backfired big time.

A Florida Walmart was criticized after they stacked packages of soda cans to resemble the World Trade Center towers. A shopper tweeted the above photo that shows the Coca-Cola display below a banner that reads, “We Will Never Forget.” Others on Twitter condemned the store, including one user who noticed the two towers were built out of Coke Zero boxes, possibly to harken back to “Ground Zero,” as the WTC disaster area was referred to following the attacks.

Walmart released a statement on Wednesday explaining that the display had been removed.

Twitter had a field day after this photo (above) was shared, showing how one Marriott hotel was commemorating the 9/11 attacks: with mini-muffins. Whether intentional or not, the half hour that the hotel was offering the freebie was very close to when the two planes crashed into the World Trade Center – the first plane at 8:46 a.m., the second plane at 9:03 a.m.

Marriott offered an apology and explained that this was not a company-wide promotion.

In 2013, a Wisconsin golf course ran a newspaper ad featuring an upcoming Sept. 11 special of a 9-hole round for $9.11 and an 18-hole round for $19.11, offered only on the anniversary of the attacks. After several complaints and some unwanted press, Tumbledown Trails apologized for the tasteless promotion. They then promised to donate the difference between their $9.11 special and their normal rates to the 9/11 Memorial. 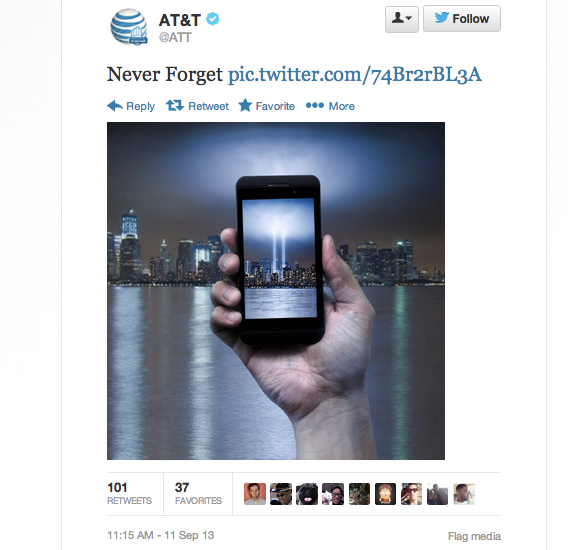 Telecommunications giant AT&T regretfully posted that pic (above) on the 12th anniversary of 9/11. Their attempt to use a national tragedy in order to sell cell phones on social media wasn’t met with much love by their followers. Many media outlets also criticized the tweet before AT&T deleted it and offered their apologies, writing: “The image was solely meant to pay respect to those affected by the 9/11 tragedy.”