A performance of "Super Bon Bon" live from the Stern Show studio! 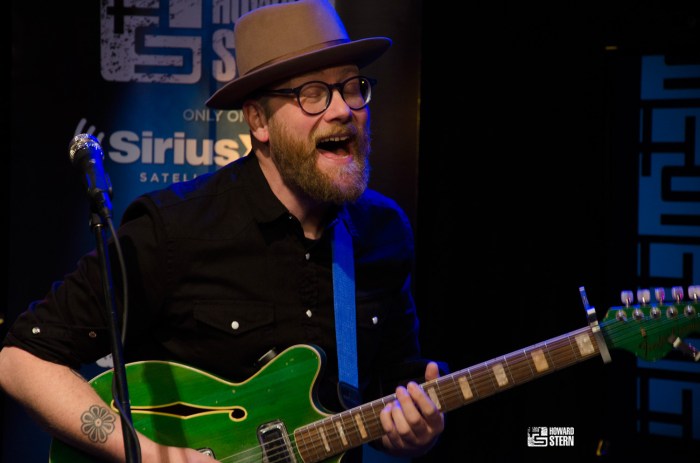 After an appearance on the Wrap Up Show, Mike Doughty stayed to perform one of Howard’s all time favorite songs, “Super Bon Bon,” in the Stern Show studio Photo: The Howard Stern Show

When Howard loves a song, he loves it for life. Whether from his formative years (Neil Young’s “Old Man”) or something that sticks from the K-Rock days (“Stars” by Hum), when he is reminded of these songs, he will praise and often times literally sing out his love for them. One of these songs is “Super Bon Bon” by the band Soul Coughing.

Mike Doughty — the former lead singer of Soul Coughing — knows all about what it’s like when Howard loves a song. “About once every year you’ll hear Howard ask ‘Whatever happened to that Soul Coughing guy?'” he told Jon Hein on the Wrap Up Show. And then that’s followed up by about “35,000 tweets” from his fans letting him know that Howard is talking about “Super Bon Bon” again.

So for Howard and the fans like him who still crave a little “Super Bon Bon” in their playlists, Mike broke into Howard’s studio one more time and recorded solo versions of his hit, and a song from his latest release “Stellar Motel,” “Light Will Keep Your Heart Beating In The Future.”

Soul Coughing was formed by frontman Mike Doughty in the early ’90s. Aside from “Super Bon Bon” you’ll remember their hit “Circles.” In 1997, Mike and Soul Coughing came into Howard’s studio to perform “Super Bon Bon” and “Soft Serve” from their album “Irresistible Bliss.” The on-air segment was quick, but Mike, being a huge fan, hung around after the show and ran into Howard in the studio. With all the band’s gear still in studio, Howard treated Mike to a quick demo of the drum solo from “Wipeout.”

“That’s what you do,” Mike says, “you don’t talk about doing mushrooms with [celebrities you admire] you let them lead, and you end up discussing ‘Wipeout.'”

Mike has a long history with the show — he began listening as a 13-year-old when Howard came to K-Rock. “I listened to K-Rock when it was all Kansas and Styx,” he explains. “Then all of a sudden there was this guy talking … pretty soon I stopped missing classic rock.”

Mike has not slowed down as a songwriter since Soul Coughing went away, releasing 17 albums since 2000 as a solo act. And that gives him a great vantage point on the ongoing “vinyl revival” debate between Gary and Howard.

“Anyone who tells you it’s anything but fun or nostalgic is just trying to justify it … it doesn’t sound any better!” Mike weighed in.

Mike is currently on tour with Big Head Todd and the Monsters – for info, music, and tour dates check out MikeDoughty.com.