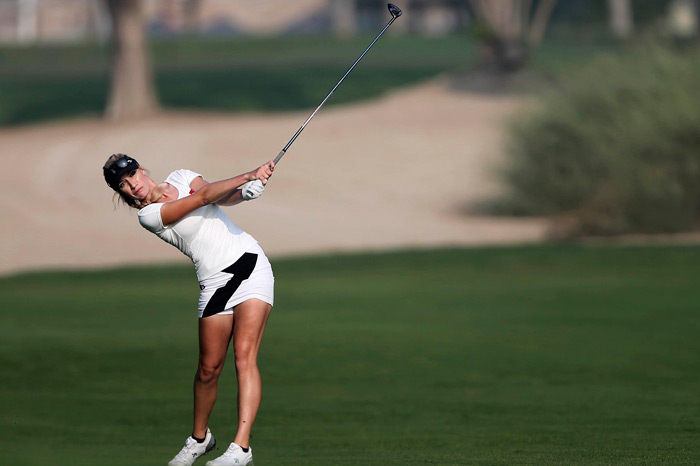 Paige Spiranac on 10th hole during the first round of the Dubai Ladies Masters golf tournament in Dubai Photo: AP

The Ladies Professional Golf Association is introducing a stricter dress code for all female players on tour. LPGA Player President Vicki Goetze-Ackerman listed all new wardrobe rules in an email earlier this month. Here’s what the women will no longer be allowed to wear:

Violating the new dress code will reportedly get players slapped with a $1,000 fine. But 24-year-old pro Paige Spiranac says the new rules are only aimed at a few players.

“Up to this point, there have been no incidences or photos of LPGA players dressed in a way that has cast the tour in a negative light,” Paige wrote in a commentary piece for Fortune. “Because of this, it’s easy to assume that the new dress code is simply a formality and won’t have much impact on the game. But if the LPGA players themselves aren’t the problem, these new rules may have been put in place as an exclusionary measure to make sure that only players who echo golf’s more traditional, conservative norms are attracted to and excel at the sport.”

“Furthermore, aside from singling out a certain style of dress, it also, perhaps unintentionally, singles out a certain body type, over which women have no control,” she continued. “Take the vague banning of ‘plunging necklines.’ What constitutes a plunging neckline? Most likely, this edict was put into place to eliminate the presence of cleavage. In that case, a curvier, fuller-figured woman would be chided and fined far more often than a woman with a smaller bust.”

Paige has racked up quite a few fans not only on the links but on her personal Instagram which currently boasts over one million followers. Check out a few of her pics below and to read more on the LPGA’s new dress code click here.

☀️ Sunny days are great for getting rid of that terrible hat tan line haha👌🏻☀️ How’s your Monday been so far?

I have always had a lot of movement in my swing. Because of my squat motion on my downswing I will always have some movement but I’m trying to stabilize and sync up my upper body and lower. Swipe to see the “stop drill” I do during every practice because it helps me feel connected. This is a great drill for everyone! Much harder than it looks haha. Also follow me on the @18birdiesapp where I post about my practice and rounds. Plus you can compete against me! #nationalgolfday💚

Get yourself a puppy who loves golf😍

People always tell me to stop posting and get to work. But I enjoy sharing moments from my rounds with you all. I video tape my swing and different shots to check technique. And there’s nothing wrong with smiling and having fun out there☺️ Life is too short to not do what you love. #callawaygolf @callawaygolf