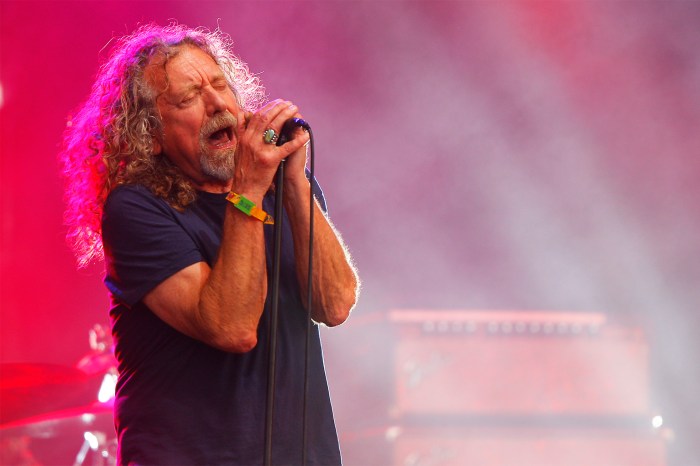 Robert Plant and the Sensational Space Shifters perform at the Bonnaroo Music and Arts Festival on Sunday, June 14, 2015 in Manchester, Tenn. Photo: AP

Robert Plant has been revolutionizing rock for over 50 years and he’s showing no signs of slowing down any time soon.

The Led Zeppelin frontman has revealed plans to release “Carry Fire,” his 11th solo album. Set to hit shelves in October, it will be the rock legend’s first EP in over three years.

Robert will again be accompanied on the album by his backing band the Sensational Space Shifters, as well as a few special guests, including Pretenders singer Chrissie Hynde—the two did a duet cover of Ersel Hickey’s rockabilly tune “Bluebirds Over the Mountain.”

In addition to dropping big album news, Robert also dropped “The May Queen,” the upcoming album’s lead track. Listen to the new single (below).

Robert also issued a statement describing the impetus behind “Carry Fire,” as well as his never-ending quest to create new music. “It’s about intention, I respect and relish my past works but each time I feel the lure and incentive to create new work. I must mix old with new,” he said. “Consequently the whole impetus of the band has moved on its axis somewhat, the new sound and different space giving way to exciting and dramatic landscapes of mood, melody and instrumentation.”

4. “Dance With You Tonight”

5. “Carving Up The World Again… a wall and not a fence”

10. “Bluebirds Over The Mountain”