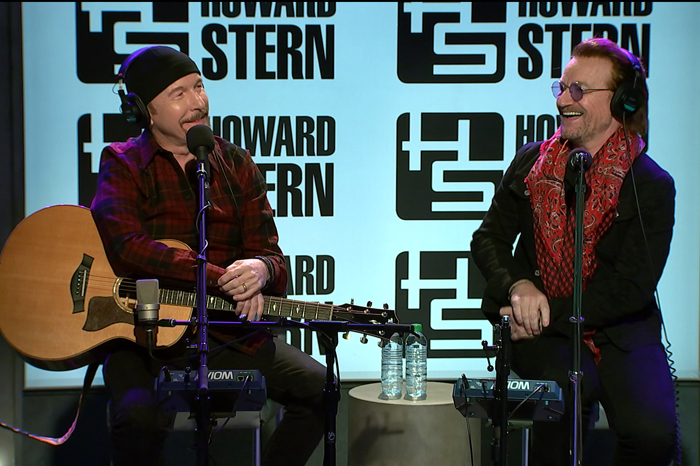 Howard announced Tuesday morning that U2 will take a one-night detour from their “Experience + Innocence” world tour to perform for the first time ever at Harlem’s world-famous Apollo Theater in a special, invitation-only concert exclusively for SiriusXM subscribers on Monday, June 11.

The rock band, who appeared on the Stern Show in 2017, will be playing material off their current release “Songs of Experience” as well as classics from U2’s storied catalogue that has seen Bono, The Edge, Adam Clayton, and Larry Mullen Jr. win 22 Grammy Awards to date – more than any other rock band.

“New York City and the U2 band have a unique history,” Bono said of the upcoming concert. “From the songs of Lou Reed, Billie Holiday and the Ramones that taught us how to listen, to the New Yorkers at our earliest U.S. shows who taught us how to play, the souls of New York and U2 have always been intertwined. The Apollo Theater is the heart of New York’s musical soul, and to finally be playing our songs on the same stage where James Brown begged Please Please Please is not only a bucket list moment, it’s an incredible honor.”

“Experiencing U2 in the intimate setting of the legendary Apollo is a rare opportunity and will make for a historic evening,” said Scott Greenstein, President and Chief Content Officer of SiriusXM. “It’s the first time U2 has played a New York City venue of this size in almost two decades and we couldn’t be more excited to offer our subscribers the opportunity to be part of this singular musical event.”

SiriusXM has previously presented special, private concerts at the Apollo Theater with Paul McCartney in 2010, Bruce Springsteen in 2012, Metallica in 2013, James Taylor in 2015, and Guns N’ Roses in 2017.

SiriusXM subscribers will have the opportunity to win tickets to this private performance through an invitation sent by e-mail. In addition, subscribers since April 25, 2018 will be able to enter for the chance to win a trip for two to New York including airfare, hotel stay, and a pair of tickets to SiriusXM Presents U2 at the World Famous Apollo Theater. See Official Rules for complete details at www.siriusxm.com/U2.

For further information on U2, their “Experience + Innocence” world tour, and “Songs of Experience” visit U2.com.