“I test him and everything,” the staffer says, “If he’s negative we f-ck like right then and there” 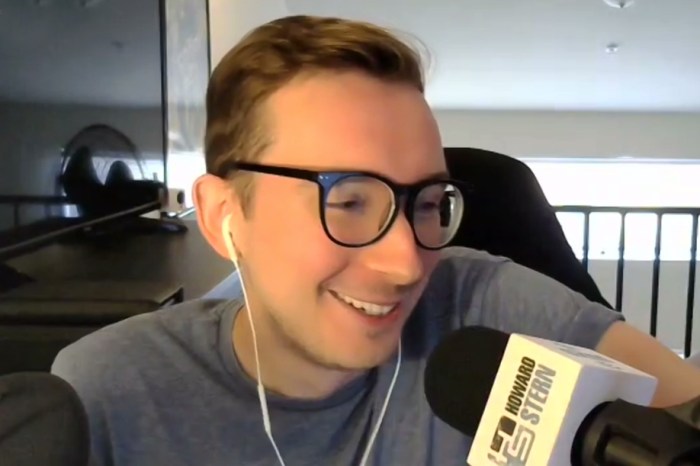 Chris Wilding came on the air Tuesday morning to update Stern Show listeners on his burgeoning relationship with a previously mentioned Colombian partner. Despite the ongoing pandemic, the two had multiple romantic rendezvous over the break, and the staffer didn’t shy away from sharing every last steamy detail.

“I test him and everything. We make it like a romantic thing. I have a testing station and I have a cocktail station. We do the COVID test. We go upstairs, outside. We have a drink. We wait for the results. If he’s negative we fuck like right then and there.”

The stories only got more sexually explicit from there. He told Howard his Latin lover can’t get enough loving and has even nicknamed Chris’s penis “cosita.” “He doesn’t just want ‘cosita.’ He wants it hard,” Chris said. “It’s a lot of pressure.”

“I heard he’s eating your asshole, too,” Howard remarked.

“He was doing a lot to my ass. I’ve never quite had my ass manipulated in that way,” the staffer responded before going into graphic detail about several encounters, including one which ended with them putting a hole in the wall of their AirBnB rental.

“I really have,” Chris said.

“Are you in love, dude?” Howard wondered.

“Yeah, I kind of am,” Chris said shortly before showing Howard and Robin pictures of his well-chiseled Colombian lover wearing just a thong.

Though the two get along nicely, Chris conceded the language barrier is occasionally problematic. During one sexual encounter, his lover asked a seemingly simple question: “duro” or “suave”? Chris chose “duro,” which he didn’t realize means “hard,” and their sex soon got too rough for his liking.

Thankfully, “Star Trek” actor and Stern Show favorite “George Takei” was on hand to give Chris some advice. “I’ve been bottoming since Truman was President. Chris, you should try squatting on a table leg,” he said, adding, “Mi bunghola es muy caliente.”

“A ‘cosita’ could also be like a hot guy,” Chris insisted. “You don’t wake up in the middle of the night frothing out the mouth because the ‘cosita’ was not big.”

Regardless, Howard was impressed by his staffer’s recent exploits. “You had a way better summer than me, dude,” he said.