Longtime caller Bobo connected with the show Wednesday morning and immediately began complaining that he hadn’t been on the air in quite some time. “I thought you forgot about me,” he said. “I’ve been [calling in] every day.

“I have all kinds of questions,” Bobo assured him. “I have about 18 pages of legal pads I’m staring at.”

Howard was shocked by the admission. “You really have 18 [pages] with questions?” he asked.

“I took a picture. I sent it to the [staff] already,” Bobo said. “There’s so many topics in my head,” he continued, telling Howard he was eager to discuss everything from Kim Kardashian’s recent “Saturday Night Live” appearance to his thoughts on Caitlyn Jenner. 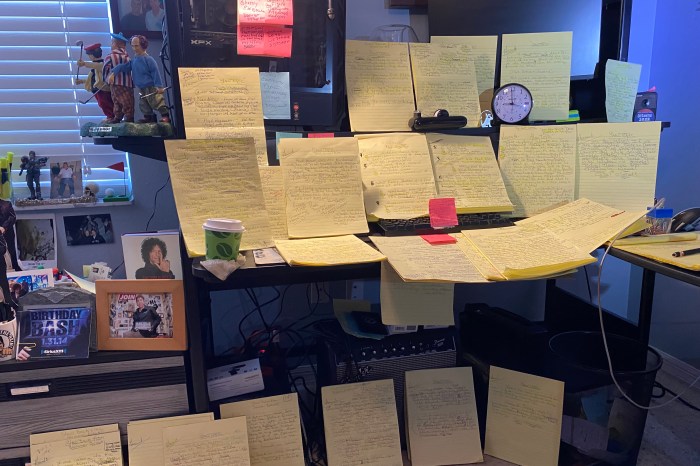 Howard thought the conversation was going nowhere, so Bobo suggested playing a Fred Norris-themed trivia game. “I have about seven [questions] that I came up with,” he said before quizzing Howard on his sound effects maestro’s city of birth, first feature film, and the radio station where he had previously worked.

Robin wondered why Bobo didn’t just lead with the trivia game instead of pretending like he actually cared about Howard’s thoughts on topics in the news. Bobo insisted he did care, but as soon as Howard started talking about Kim’s “SNL” appearance Bobo cut in and interrupted him.

Fred’s sniffly Bobo Puppet had its own topics to discuss, from Meghan Markle and the moon landing to which celebrities pleasure themselves with vacuum cleaners. The puppet had a brand-new look, too, complete with facial hair, semen stains, an earring, and a jacket filled with stolen valor. The puppet was also in a car. “I always have to call from my car because I annoy the shit out of my wife,” the Bobo Puppet explained. “So, it’s either here or an alligator pit down by the swamp.”

“I gotta tell you something, Bobo Puppet. You are way more interesting than the real Bobo,” Howard concluded.