Bigfoot Gives a Life Update and Plays a Holiday-Themed ‘Would He F-ck It?’ Game

“I got myself in a little bit of trouble and I had to go away for a little while,” the Wack Packer says 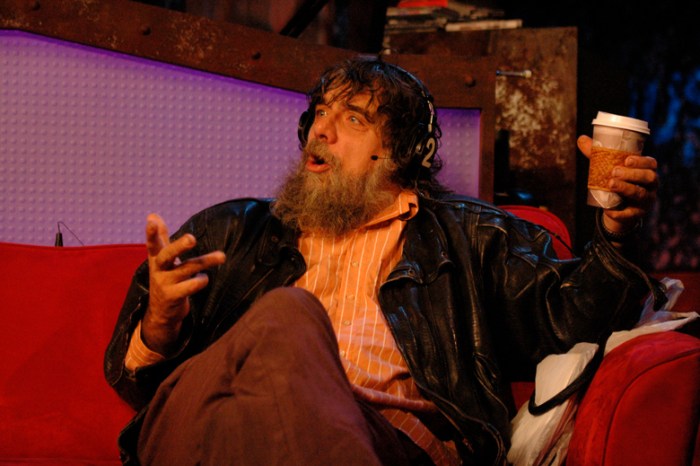 From legal troubles to arachnid infestations, it’s been a rough couple years for Bigfoot. However, in a recent conversation with Stern Show correspondent Wolfie, the beloved Wack Packer insisted things were turning around.

“I got myself in a little bit of trouble and I had to go away for a little while, I did,” Bigfoot said in a clip played on Wednesday morning’s show. In it, the Wack Packer also explained he’s living in a group home and hopes to get back on his feet soon.

“Are you happy?” Wolfie asked him.

“Yeah, this is the best I’ve been in years,” Bigfoot responded, adding that he’s in good health now, too, thanks to a pharmaceutical regimen consisting of a mood stabilizer and three different types of sleeping pills. “It takes a lot to knock this moose out, it does,” he said.

Howard was impressed. “Sounds like he has his shit together,” he said.

“He sounds clearer than he has in years,” co-host Robin Quivers agreed.

Always the entrepreneur, Bigfoot discussed a few of his ongoing side businesses which include selling cigars and loose cigarettes to his roommates and operating as a loan shark.

“He’s living his best life, though—isn’t he? … It’s great to hear Bigfoot is doing so much better,” Howard remarked before inviting Robin to play a holiday-themed Bigfoot game.

“I’m going to mention something, you tell me if Bigfoot would fuck it,” Howard instructed. Play along with Robin (below).