VIDEO: Jerrod Carmichael Talks Comedy, Pornography, and Why He Came Out on Stage

It’s been a season of new experiences for actor, filmmaker, and stand-up comedian Jerrod Carmichael. In addition to recently hosting “SNL” for the first time and coming out to the world in his hilarious, headline-grabbing HBO special “Rothaniel,” the 35-year-old North Carolinian turned New Yorker will soon release his feature film directorial debut, “On the Count of Three.” On Wednesday morning, Jerrod checked another first off the list when he made his Stern Show debut. In a candid conversation with Howard, he opened up to listeners about everything from his favorite porn stars to how his life has changed since using his raw but intimate stand-up special to tell the world he is gay.

“That special was about me saying the things I was scared to say,” Jerrod told Howard. “It’s all about secrets but more importantly things that have personal consequence.”

In “Rothaniel,” he revealed many friends and family members accepted his sexuality after he told them, but the conversation has gone far less smoothly with his devoutly Christian mom.

“Me and my mom have a God-sized wall between us,” Carmichael said. “My mother holds onto religion because it got her through really rough times … She needed God for every step of her life, and she didn’t account for a gay son. She doesn’t really know what to do with it. I can feel her being lost.”

Until recently, he and his mother spoke every day. “I want to work with her but talking to her and not acknowledging that part of myself causes a reverberating effect of self-hate that I can’t afford right now. So, I added distance,” he told Howard, adding, “I don’t want the conversation to be fake. I’m trying to eliminate that from my life … It’s hard not to be yourself, especially with someone you love so much.”

The conversation has been smoother with Jerrod’s father, who he said sent him a thoughtful text right after “Rothaniel” was released. Since then, his dad has taken to “playing referee” between Jerrod and his mom. Taking out his phone in the studio, Carmichael read the most recent message his dad had sent him. “Your mom called the other day, so take some time to call her,” it read. “She loves you and misses her baby boy.”

“What I wrote back was … ‘I know. I love her too, but her baby boy is now a big gay man and I think we need some time to come to terms with that,’” Jerrod told Howard. “And that’s where we are.”

The One Show That’s Not on His IMDB Page 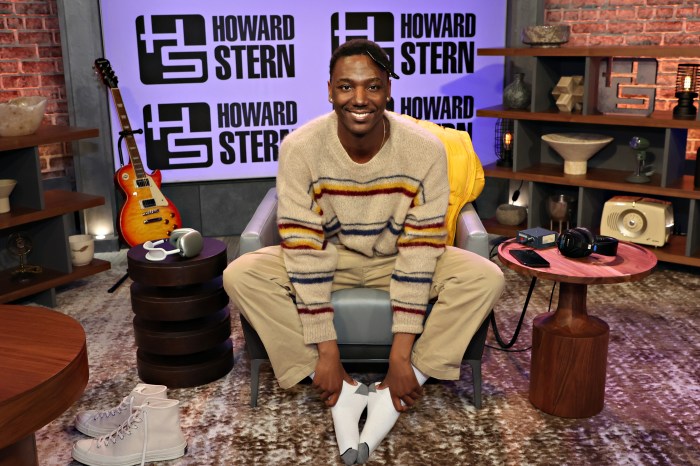 “The Carmichael Show” was a breakthrough hit for Jerrod, airing for three seasons on NBC from 2015 to 2017, but as Jerrod told Howard on Wednesday he’d also run a previous show many years earlier.

“I produced a morning talk show every morning in 5th Grade,” he said, explaining he ran the school’s closed circuit TV series with the help and encouragement of his teacher, who brought his handwritten scripts home each night and typed them up (“because I didn’t have a computer”) for the kids to use the next day.

He said his teacher helped him out when he was at a critical juncture in his childhood when he didn’t know what the future might hold as his family could barely make ends meet and people he knew were literally on trial for murder.

“It was kind of ‘Dangerous Minds’-y, if I’m being honest. [She] was kind of like Michele Pfeifer with her leather jacket, and she really nurtured [something] I didn’t know was possible,” he said, recalling a time she snuck him out of school to see a production of “Joseph and the Amazing Technicolor Dreamcoat.”

“She really cared about—as cliché as it sounds—making a difference,” he added.

Jerrod’s love for performing carried him out to L.A. a few years later, where he eventually broke into the stand-up scene by way of open mic nights. He told Howard he bombed his first time on stage but was a quick study. Before long, his up-and-coming colleagues had given him a nickname: The Future.

Coming out earlier this month has affected Carmichael’s life in countless different ways. As he told Howard on Wednesday, he even carries himself differently now.

“I wasn’t sitting like this a few years ago,” a cross-legged Jerrod laughed. “I told a friend that since coming out I take better pictures because I’m not worried about looking gay. Before … I was like, ‘Am I not smiling because smiling is gay?’”

“Bro, I mean, it changes,” Jerrod said. “I should’ve been more prepared for this moment because I really want to shout [them out]. I want to fuck some of them,” he laughed. “I don’t have Twitter and Instagram, so all I have is this moment, Howard. Please have me back so I can [bring] a list.”

“What a waste,” Howard joked.

“I’m like Bill Withers. I just retired early and went back to Georgia,” he replied with a laugh.

On a more serious note, Jerrod said that after coming out he now felt like he’s finally ready to receive love.

“I’m tempted to set you up,” Howard said.

“I’m at least willing to go on a Howard Stern blind date—not blind, because the gays care about aesthetic, but a date,” Jerrod laughed.

That’s not to say he has trouble meeting men on his own. He told Howard he’s found success with online dating and that one of his secret weapons involves a photo he has with pop star Taylor Swift from actress Lena Dunham’s wedding.

“There’s a picture of me and Taylor I use on my Grindr profile now,” Carmichael said. “You really want to excite the gays in New York City? Send them a picture of you and Taylor Swift.”

Howard was curious who some of his guest’s celebrity crushes were. “You attracted to Timothée Chalamet?” he asked.

“Who isn’t?” Jerrod responded with a laugh. “Him and Harry Styles are dangerous,” he joked, suggesting the two celebrities are happy to court attention from the gay community. “I saw Harry Styles in a fucking swamp the other day and I was like, ‘Why is this hot?’ I’m into it. I don’t like that I’m into it, but I’m into it.”

Jerrod Carmichael’s “Rothaniel” is streaming now on HBO Max. “On the Count of Three” opens May 13 in select theaters and on demand.