Actress and comedian returns to talk “American Gigolo," "A League of Their Own," and “The L Word”

Actress, comedian, producer, and all-around entertainment icon Rosie O’Donnell returned to the Stern Show on Monday for a wide-ranging interview covering everything from the gift she gave to a recently paroled Martha Stewart to the Broadway musical she once talked rock legend David Bowie into enduring. Her sit-down with Howard also touched upon meeting her girlfriend on social media, Rosie’s reaction to “the slap,” and the 60-year-old’s recent transformation from daytime TV royalty into the star of three wildly different TV dramas. She appears as a bartender on Amazon’s acclaimed “A League of Their Own” reboot, a detective investigating Jon Bernthal on Showtime’s racy “American Gigolo” reprisal, and a public defender on Showtime’s romance drama “The L Word: Generation Q.”

She told listeners she was excited to have just been named a series regular on Season 3 of “The L Word,” but the promotion had come with new responsibilities. “I have about three more weeks [filming] ‘The L Word’ and possibly a sex scene,” O’Donnell told Howard as she began to blush in the studio.

Getting intimate on camera wasn’t something she’d imagined doing. “I told them when I took the job I’m not doing a sex scene, but the women there are so smart … and they’re writing unbelievable, great stuff,” she said. The episode’s director assured Rosie an intimacy coordinator would be on hand, but that hasn’t entirely kept the nerves at bay. “[I’m] totally panicked about it. It’s three weeks away and I’m already like sweaty,” she told Howard.

“Are you ready to disrobe? Is that a big issue for you?” Howard asked.

“It’s a big issue,” Rosie admitted before joking about what negligee they might ask her to wear.

Rosie, like so many in Hollywood, was heartbroken over the untimely death of award-winning actress Anne Heche, who passed away in mid-August after succumbing to injuries sustained in a horrific car accident. She said she had a soft spot for Anne since reading about the actress’s difficult upbringing in her 2003 autobiography “Call Me Crazy.”

“I always sort of felt sorry for her but never reached out to her, so when she’s dying and all that happens I’m legitimately bereft,” Rosie told Howard.

However, Rosie was shocked when she heard Anne had publicly accused Rosie of threatening to ruin her career back when she was a guest on “The Rosie O’Donnell Show.” “I called my nephew, who does all the tapes for us, I go, ‘Pull every Anne Heche interview,’” Rosie told Howard, explaining how the tapes ultimately revealed Anne had misremembered their interactions.

“She was confused, I think, about something, but the concept that she walked around feeling that about me for 20-something years kind of broke my heart a little bit,” Rosie continued. “I would’ve loved to have had a moment to be able to call her up and go, ‘Hey, tell me what you’re talking about’ – because that was so not me, so not what I ever did.’”

Switch Hitting on ‘A League of Their Own’ 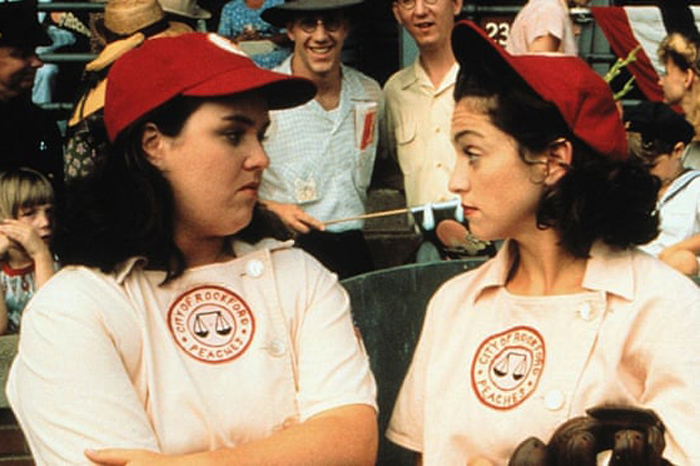 For those who haven’t seen the original “A League of Their Own,” Rosie plays Doris Murphy, the third baseman of a women’s baseball team that took America by storm in the 1940s. While her character is presumed to be gay by many of the film’s fans, Doris’s sexuality is never overtly discussed on screen. The openly gay actress has long maintained she interpreted her character to be gay, regardless of what was in the script, but on Monday Rosie revealed something big about her own sexuality: she had a boyfriend while making the movie.

“It wasn’t horrible,” Rosie told Howard of her year-and-a-half-long relationship with a man named Michael. “It was a very interesting thing.”

How did Rosie finally come to realize she couldn’t be with a man?

“The actual sex part was what I couldn’t do. The making out, the living with, the loving him – all that was good – but then when it came to the morning, and he was excited, I was out of the bed before he could even wake up,” she said, adding, “He was a very, very loving guy, but I knew in the end I was gay, and I couldn’t continue.”

Rosie recalled to Howard some of her more awkward experiences with social media, including her scrutinized pair of apologies to actress Priyanka Chopra on TikTok for mistaking her for author Deepak Chopra’s daughter as well as her Twitter Direct Message exchange with “Hacks” actress Hannah Einbinder. “I’m like, ‘Listen, you’re a great actress, this is your big break and I just want to let you know show business never gets as good as it is now’ … I write her this whole thing,” she said of the well-intentioned note. “She writes back, ‘Yeah, I know, my mom is [original “Saturday Night Live” cast member] Laraine Newman.’”

Still, at least one good thing has come out of the comedian’s presence on TikTok – her girlfriend Aimee, a tattooed massage therapist from Spokane, WA she met on the social platform. “I watched … her TikToks and every time I saw her, I would smile and [be] like, ‘This woman is like perfect. Look at her, she’s so happy and enthusiastic and beautiful and bright and she has a light coming from her,’” Rosie told Howard. “I sent her a DM … I thought maybe we would just be friends. I said, ‘You’re very beautiful. I love your look,’ and like 10 days later she wrote me back with a little video.”

Though Rosie stated in her last Stern Show sit-down that she was no longer feeling sexual, being with Aimee has given her a fresh outlook. “I’ve never dated a tattooed woman before. [She has] 23 tattoos, including a huge one on her neck and her thighs and she’s very, very sexy to me,” she revealed. “I’m back in action!”

Still, the twice-married Rosie is taking things slow this time around. “I’m in love. She’s really kind and wonderful and I like the pace we’re going at. It’s not like a U-Haul situation,” she insisted. “[Aimee’s] not pressuring me, which is good because I don’t do well under pressure like that. It only feels like a weight but that hasn’t happened.”

If wedding bells ever did start ringing, Rosie already had an idea for her bridal party. “Robin, you’ll be the maid of honor,” the actress joked with Howard’s co-host.

In the mid 2000s, cultural icon and Stern Show veteran Martha Stewart served five months in federal prison for obstructing justice. Rosie felt Stewart’s sentence was the unduly harsh byproduct of a sexist criminal justice system, so she reached out to offer her support.

“I didn’t know Martha Stewart, but I wrote her an email … saying if you ever need anything in prison please let me know,” she told Howard. “And two months later her assistant called me and said, ‘Would you please go visit her?’”

Rosie was happy to go visit Martha, but in retrospect she realized she completely misjudged what she might be in for. “You want to hear how silly I am? I thought, ‘It’s prison!,’ [so] I didn’t take a shower, I had [dirty clothes], I was trying to look as low-key as I could … and she walks through the door like she’s in a Scavullo photoshoot,” Rosie recounted. “Her hair has Jolen creme bleach that she got at the commissary, she cinched her orange jump suit, and she cuffed her legs – she looked fantastic, and I looked like, you know, her homeless cousin in Utah.”

While Rosie never smuggled any fruit into prison, the conversation did inspire her to give Martha a thoughtful gift upon her release. “I flew in a lemon tree from Capri, and I had it on her front porch when she came back, and then I never heard from her again,” Rosie told Howard, adding, “When I feel people have suffered greatly, I want to drop grace on them when I can.”

Whether speaking her truth on daytime TV or the stand-up stage, O’Donnell has famously never pulled her punches when critiquing director and alleged sexual abuser Woody Allen. Thus, she was caught off guard when a casting director called her up in the late ‘90s and offered her a role in Allen’s film “Sweet and Lowdown.”

“Do you think he was trying to buy your friendship?” Howard wondered.

“Yes,” Rosie said, adding that her refusal to work with Woody ultimately led to her befriending actress and mother to the alleged abused, Mia Farrow.

“Rent” and Sushi With David Bowie

Rosie told Howard about her friendship with late rock icon David Bowie, including how dragging him and his wife Iman out to a popular Broadway musical had improbably helped her fall in love with sushi.

After they left, Bowie devised a way to pay Rosie back. “He said, ‘Here’s what you’re going to do: You’re going to come to Nobu with me and Iman, I’m going to order, and you’re going to eat every fucking thing I order’ – because he knew I was afraid of sushi,” Rosie recalled, saying she’s since come to appreciate sushi as “delicious food.”

The dust is finally settling on the controversy actor Will Smith caused by slapping comedian Chris Rock on stage at the Oscars, but O’Donnell was still willing to share her thoughts on the matter.

“I was enraged at [Smith], and I still am,” she told Howard. “Not only did he ruin Chris’s night … he ruined everything that night,” Rosie said. “He really ruined the respect and majesty, if there is some, of the Academy Awards.”

“I was horrified,” Rosie continued, saying she told Chris as much when texting him on that fateful night. “I said, ‘Hold your head up high. That was not you. Fuck him.’”

“American Gigolo” airs Sundays at 9 p.m. on Showtime. “A League of Their Own” Season 1 is streaming now on Amazon Prime Video.