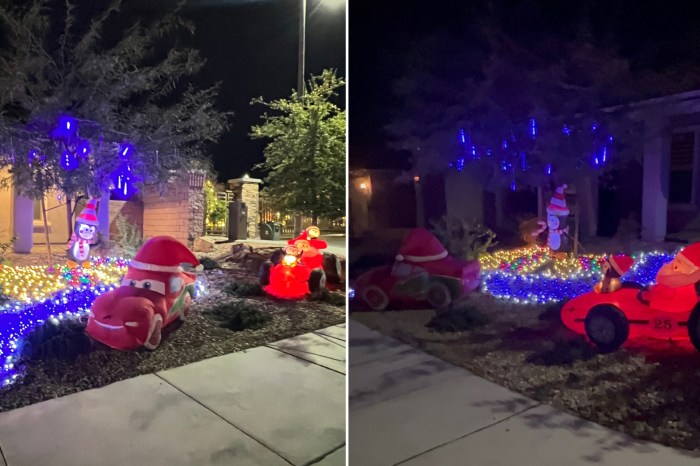 Ronnie’s decorations outside his house in Las Vegas

Ronnie Mund has spent the past few weeks teasing a big announcement, and on Monday Howard hoped his longtime limo driver would give listeners an update.

“I will have it in place by next week,” Ronnie assured his boss.

Aside from Jon Blitt, who suspected Ronnie was about to debut a new haircut, most everyone believed Ronnie’s big reveal pertained to his love life and longtime engagement to his fiancée.

“He got married and he’s announcing a party,” longtime caller Ralph Cirella guessed.

Co-host Robin Quivers, meanwhile, believed she could rule something out. “I don’t think he’s going to have a baby … because that would be big,” she said.

“That would be a killer announcement,” Howard responded.

Though Ronnie wouldn’t share anything further about his announcement, he was happy to discuss the Christmas decorations he’d just put up at his Las Vegas home.

“It looks like a junkyard,” Howard remarked after seeing a photo filled with inflatable cars, plastic penguins, and plenty of lights — but no Christmas dragon. One decoration in particular left Howard confused.

“That’s just a fucking little race car with Santa Claus and a couple of penguins,” Ronnie told him, adding, “I like penguins! I’ve always liked penguins.”

As surprising as that was, Howard was more shocked to learn Ronnie deflated the decorations every night before going to bed and then inflated them again the next evening.

“During the day he just has a bunch of deflated crap on his lawn,” Ralph conclude with a laugh.