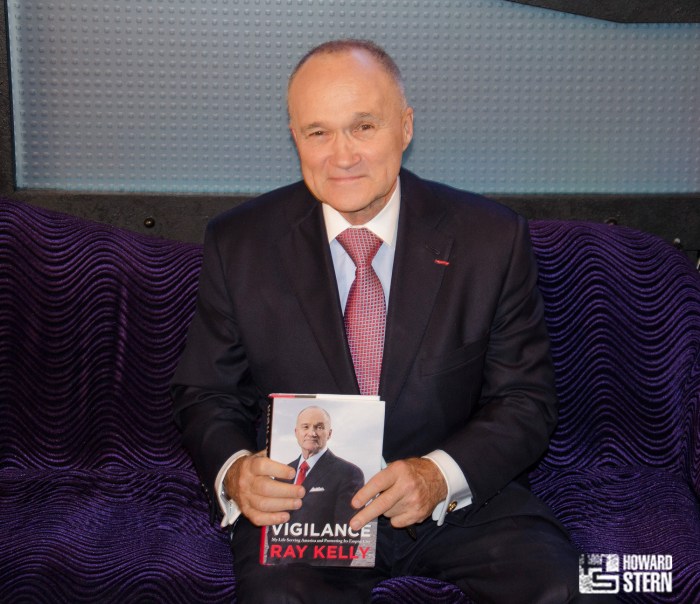 Former New York Police Commissioner Ray Kelly dropped by the Stern Show this morning and his expertise could not have been more timely considering both the climate in New York as well as the global climate in the wake of recent terror attacks in Paris.

According to Kelly, New York remains the top target of terror in the world as a result of its global importance financially, culturally, and beyond.

Click here to read his entire analysis of the situation.

Staying Safe In The City

Howard wondered if Ray had any advice for people looking to protect themselves in the big city, but his top suggestions were probably things you already know.

First off, “everyone should think about having a to-go bag” ready for a quick departure in the event of a natural disaster or anything that causes people to leave their homes.

Additionally, “it’s sort of a hackneyed term, but ‘if you see something, say something,’ is still very valid,” he offered.

If there’s anyone who can speak on the complex nature of defending American soil, it’s Ray Kelly. Throughout the interview Ray recounted some of the terror plots he personally experienced for Howard and what he learned from the process.

Listen above for insight from Kelly the Brooklyn Bridge plot to why he doesn’t feel waterboarding fits under the term “torture.”

Will He Run For Mayor?

Considering all of his experience, many in the media have been predicting a mayoral run for Ray Kelly, surmising that his new book is preface for his campaign, but Kelly coyly shut down the rumors, telling Howard: “No, right now I have no plans … I’m happy doing what I’m doing now.”

Later in the interview he conceded that he’d “never say never” though. The jury is still out.

One topic that hit close to home (especially for Stern Show staffer Sal Governale), was Ray’s take on the problem of homelessness in New York City – a problem which he was once lauded for greatly alleviating.

“Well, I think you have to be proactive in going after them,” he said. From using undercover cops to “aggressive enforcement, there is a lot more Ray would be doing if he was still the commissioner.

The Problem With Batman

And in the most important observation of the day, while he is a former police commissioner, never compare Ray Kelly to Gotham’s Commissioner Gordon. “He’s never really quite got it,” Kelly joked.

And don’t even get him started on Batman. “I’d probably try and arrest Batman … He’s working above the law.”

The Most Realistic Cop Show

If you’re looking for realism on TV, though, look to “NYPD Blue,” for which Ray Kelly’s friend and former NYPD detective Bill Clark lent his expertise. Ray said, after going to see the set, he was astonished by the attention to detail they followed.

The Complicated Job Of A Police Officer

Amid the backlash to recent police brutality, Ray also addressed the hardships of being a police officer – which he referred to as a “noble profession.”

Listen above for his candid comments on the complex relationship cops have with the public they serve and protect.

For more insight from Ray Kelly, grab a copy of his new book, “Vigilance: My Life Serving America and Protecting its Empire City.”