See who came out on the bottom of the list 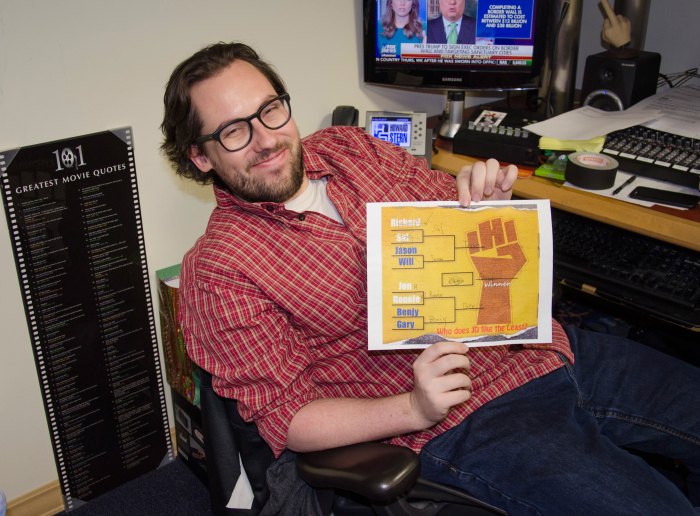 Not even a month has passed since JD Harmeyer caused a staff kerfuffle over who was (and who was not) invited to his birthday party, and he was forced to once again make some tough, personal choices as Howard made the show’s media producer fill out a bracket with the purpose of discerning which staffer he liked least Wednesday morning.

“Why am I having to do this?” JD grumbled as he was summoned to the studio.

“Why? Because you’re going to have the hardest time with it,” Howard said matter-of-factly.

Sal Governale vs. Richard Christy: Sal (“I am closer to Richard.”)

Jason Kaplan vs. Will Murray: Jason (“They both love to bust my balls.”)

Jon Hein vs. Ronnie Mund: Ronnie (“I have said before on air that I am closer to Jon.”)

Benjy Bronk or Gary Dell’Abate: Benjy (“I’m not a fan of some of his political ideas.”)

The final matchup came down to Jason Kaplan versus Benjy Bronk and initially JD seemed to be quite sure of his answer: “I will say Jason because he’s fucked with me more than Benjy has.”

A disappointed Jason told Howard that he “knew it was coming,” but countered that it’s “easy to have good feelings about someone that you don’t interact with.”

JD was immediately swayed by the comment and agreed. “I’m actually going to change my answer,” he declared. “Jason is sort of right. I really don’t know if I know the real Benjy.”

With that, Benjy was determined to be JD’s least liked staffer.

While on the subject of Benjy, Howard added that he was seen Tuesday by Richard Christy humping a fire alarm in the building’s lobby to the horror of security guards. The theory in the back office was that he was simply doing stunts in the hope that word got back to Howard and he would get some air time, but Gary clarified that he spoke with Benjy who apparently saw Richard approaching and thought it would be funny to make a scene.

Check out JD’s final bracket below. 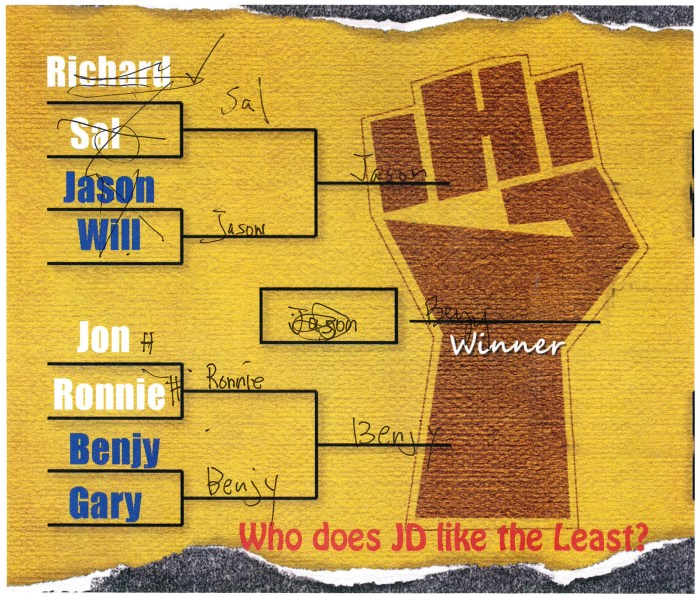