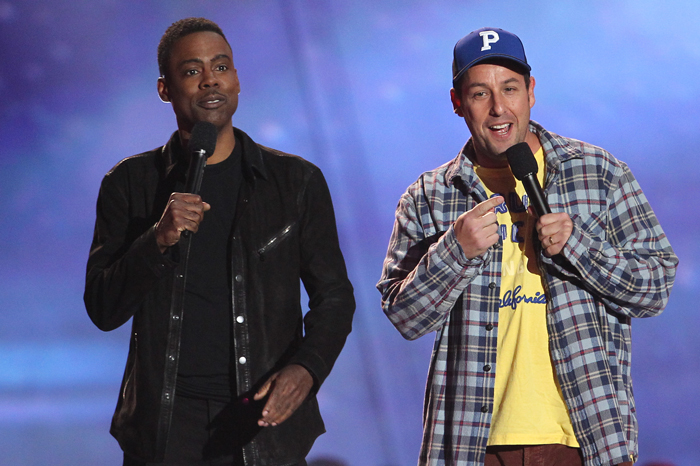 Adam Sandler and Chris Rock are becoming family in a future Netflix film. On Wednesday’s Stern Show, Adam revealed the plot of the movie, his fourth in an eight-picture deal with the streaming giant.

“My daughter’s going to marry Chris Rock’s son,” he told Howard. However, Adam said this is not going to be yet another story of familial racial tension, agreeing with Howard that that plot is a bit tired. “It’s kind of the week of the wedding and what families do and how crazy it gets,” Sandler explained.

After the film’s concept came to him, Adam said he phoned his good friend Robert Smigel. “I called Smigel and I said ‘I have an idea’ and I told him about it and said ‘I would love you to work on it’ and he’s directing it and he’s doing the whole thing,” Adam told Howard. “I knew it would be something that he would like to talk about it. It’s family stuff.”

Adam said he gets his movie ideas “maybe once every six months,” a pace that should sustain him through his current contract with Netflix. “It’s [a] very cool process,” Adam said of working with the entertainment company. “Creatively, they get excited about stuff and they give me some thoughts, but they do trust me. They do trust what I want to do.”

The trust has been well earned, too, considering Netflix previously revealed Adam’s first two films in their partnership (“The Ridiculous 6” and “The Do-Over”) are the platform’s biggest original film releases ever. Adam’s next movie, “Sandy Wexler,” looks to pile on to the comedian’s current streaming success.